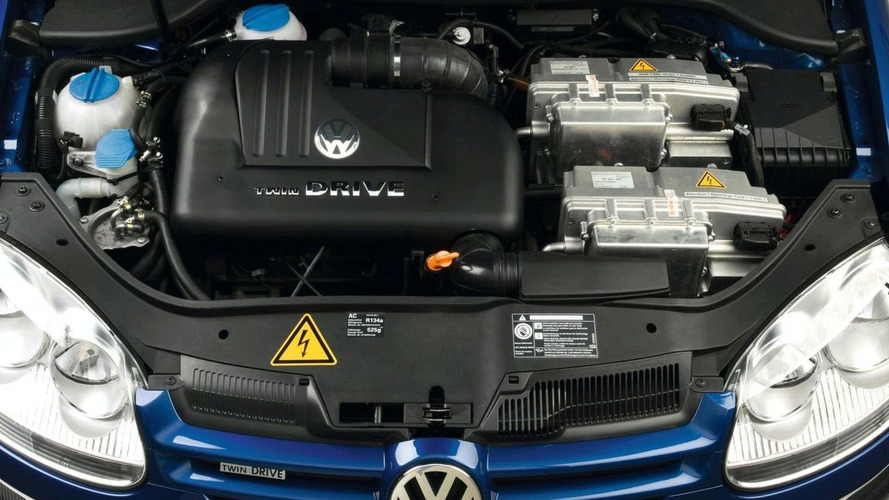 "TwinDrive will enable users to cover everyday routes by electrical, solar, wind and water power without any limitations relative to conventio­nal vehicles."

The core objectives of the research project are not only to improve fuel economy but to also enable driving in urban areas by electrical power only using renewable energy. Therefore, the electric motors of the test fleet should only be driven by electricity generated from renewable energy sources (wind, water and solar power).

Initiated by the German government, the project has put together an alliance of eight Germany industry giants in collaboration. Assuming leadership of the project, “Volkswagen will be investing double-digit millions in advanced development of this technology,” according to VW Chairman, Prof. Dr. Winterkorn. The German Federal Ministry for the Environment is also committing millions of Euros for the large-scale study that runs until 2012.

Federal Environment Minister Sigmar Gabriel states, “The test fleet test can make a significant contribution in unifying mobility and climate protection as a result of the close cooperation of partners from the automotive, battery and energy producing industries.” Prof. Dr. Martin Winterkorn reaffirmed, “For the first time ever, energy producers and consumers are merging to form an even more powerful alliance. If this fleet test is a success, that would be a positive signal for worldwide climate protection.”

Capable of producing 176 hp (130 kW), the Golf TwinDrive uses an intelligent operating system which always chooses the optimal operating mode – individually tailored to the specific route and situation, so it always offers the most efficient combination of electric motor and combustion engine. Unlike typical hybrid drive systems which have an electric motor supplementing a combustion engine, “the exact opposite is true on the TwinDrive: here the diesel or gasoline engine supplements the E-motor,” according to Prof. Dr. Martin Winterkorn. The TwinDrive places emphasis on a long range E-motor capable of 50 kilometers for city driving, while the combustion engine is for long range use.

No specific fuel efficiency figures have been provided yet, but VW gave an example of driving from Potsdam to the “Automobile Forum” in downtown Berlin and back – averaged over 100 kilometers - the Golf TwinDrive consumed just eight kilowatt-hours of electricity and 2.5 liters of fuel.

Ultimately, the TwinDrive represents the first step towards a completely electrically powered automobile. VW expects to present initial vehicles as early as 2010.