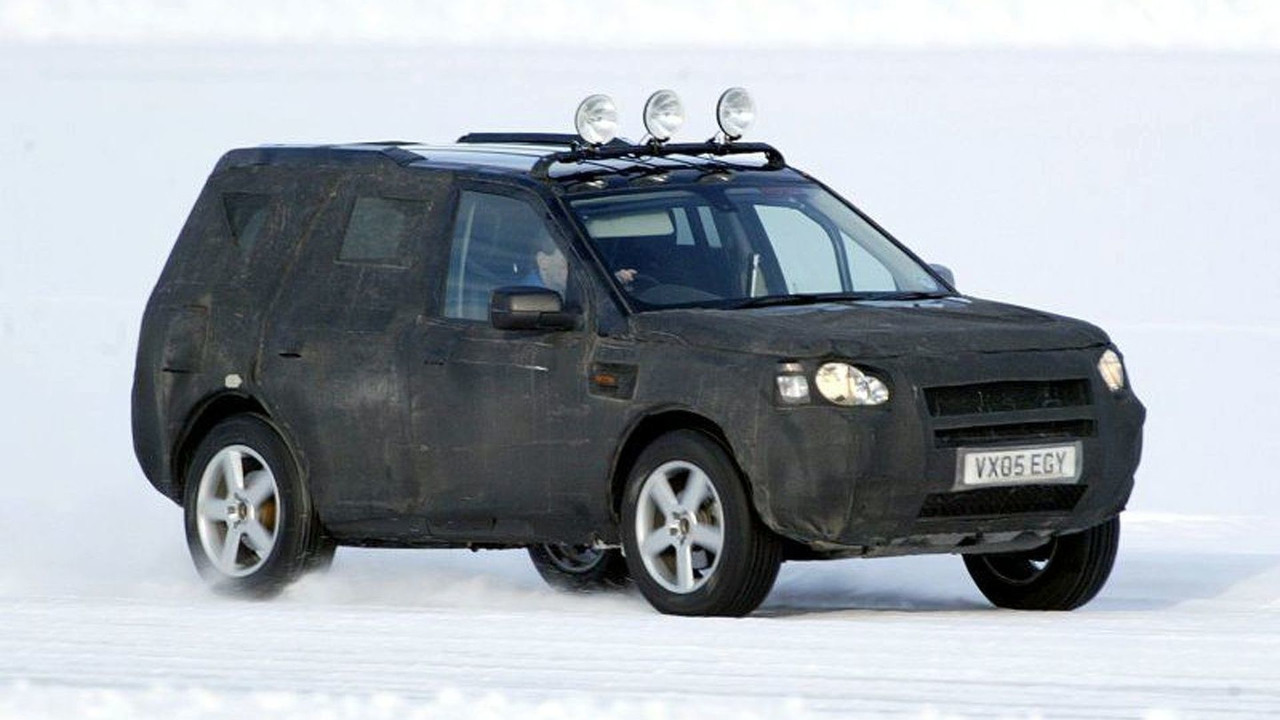 ...rumours persist that we will eventually see a 'baby' Land Rover which will sit below this new Freelander in the Land Rover range, possibly in 2008 and including a front-wheel drive model.

Some observers reckoned we'd see the all-new Landrover Freelander as early as this year's Detroit Show, but it was conspicuous by its absence. However, the advanced state of the car in these pictures shows it's close to production-ready and, instead, we expect to see the finished car for the first time at the Paris Show later this year, and sales should start late in 2006.

It's clear from the pictures that the new car looks very similar to the existing model, especially around the nose where Landrover trademarks such as the grille and clamshell bonnet are obvious, even under the disguise. However, we expect that several styling cues from the Discovery and Range Rover will find their way onto the new car. Look closely, for example, and there appears to be a new air intake ahead of the front passenger door, as on the Discovery.

Another difference on this new model is that the central location of the rear number plate seems to confirm that the spare wheel will not hang on the rear door, as on the current model. Likewise, the position of the handle on the tailgate seems to suggest that it will open from the top, whereas the current model's is a side-hinged affair. The car itself is believed to have grown slightly in every dimension, with a wider track and longer wheelbase, but head of design Geoff Upex has already said the car will be basically the same size as the current model. What will improve, though, is the car's packaging, so it should provide more space for both passengers and luggage. The pictures also seem to show that the rear doors have grown, making for easier access.

Despite what the similar looks might suggest, the car actually sits on an all-new platform, a stretched version of the C1 platform that underpins the Ford Focus, Mazda 3 and Volvo S40. In due course, we expect to see a 'baby' Volvo 4x4, the XC50, on the same building blocks.
The new Freelander is expected to be an even more capable vehicle off-road than the current model, with a stiffer chassis and increased ground clearance. Most of the components will come from parent company Ford, but upgraded to ensure the new car performs as well as we expect of a Landrover away from Tarmac. The gearboxes and engines, likewise, have been upgraded to improve their off-road performance and will include stronger V6 units that are crucial to the car's success in America.

The car in the pictures is a five-door and, unlike the current model, that will be the only body style available. The slow-selling three-door and soft-top models are not being directly replaced. However, rumours persist that we will eventually see a 'baby' Landrover which will sit below this new Freelander in the Landrover range, possibly in 2008 and including a front-wheel drive model.