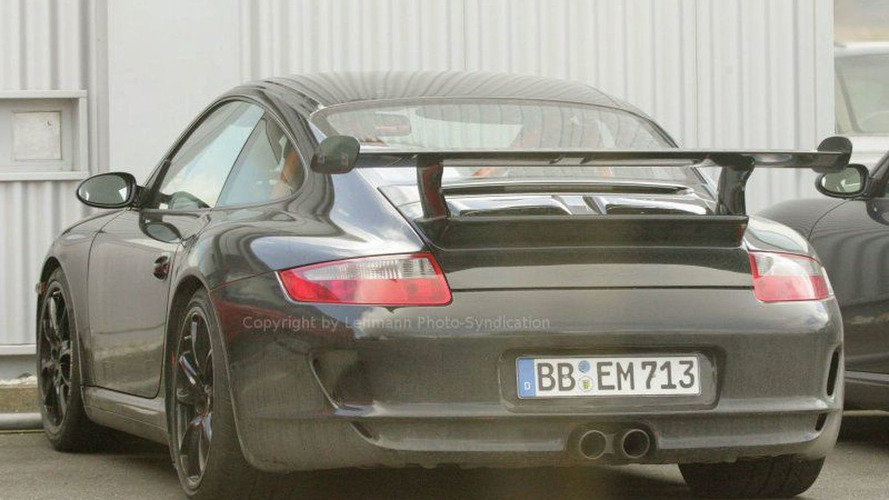 The GT3 RS uses the wider rear fenders of the Carrera 4, a wider rear track, a more aggressive rear wing, and a modified front spoiler lip will be offered in the same 1970s colours that made the 1973 Carrera RS famous..

Work on two Porsches has been discoverd at the Nurburgring

Porsche GT3 RS
The first, and highly anticipated, 911 is the upcoming GT3 RS -- which will make an appearance worldwide. The GT3 RS uses the wider rear fenders of the Carrera 4, a wider rear track, a more aggressive rear wing, and a modified front spoiler lip. The RS will be offered in the same 1970s colours that made the 1973 Carrera RS famous, as evidenced by the bright orange and green roll bars in test mules as well as the edges where their black peelcoats are shrinking. The new GT3 RS will lose weight compared to the standard 997 GT3 with items like a carbon-fiber wingtop, the extensive use of composite bodywork, and lightweight glass. It will homologate several changes for the upcoming 2007 GT3 RSR race car, possibly including a 3.8-liter flat six instead of the 3.6-liter, 415-hp unit in the new GT3.

Porsche GT2
The second car and unexpected by many sources at this point is the 997-based GT2. With standard PCCB ceramic composite brakes from the 605-hp Carrera GT, the wider rear flares of the Carrera 4/Turbo range, and intercooler ducts in its rear fenders, it is unmistakably the next GT2. The rear wing top on this test mule is similar to those found on previous GT2s and may be exchanged for a newer design, but the lower, vented wing-base looks production-ready. The front bumper is new and simpler than the 997 Turbo's and the rear bumper vents remain hidden on this car. Expect the GT2's horsepower to be at least 520 when it's announced later this year, with the possibility of as much as 550 or more on the table. Top speed should exceed 200 mph, a first for production-line 911s.