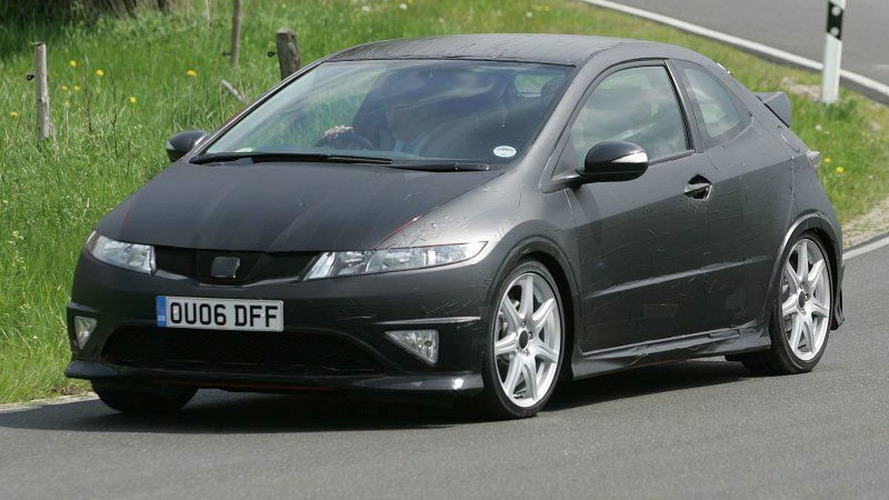 With power coming from a 197-bhp 2.0-litre VTEC engine, it should deliver the benchmark 0-100 km/h sprint in 6.5 seconds and have a top speed of 240 km/h. The flagship model is likely to cost in the region of 26 000 Euros when it hits showrooms next year.

Feast your eyes on the Japanese firm's latest addition to the family – the new three-door Civic! Thanks to these sensational pictures snapped close to the German Nürburgring, we can bring you the first shots of the newcomer, which will undoubtedly be the style choice for hatchback buyers. With tough competition from existing, distinctive three-door models such as Alfa's 147 and the Opel Astra, plus the forthcoming launch of Volvo's C30 and BMW's 1-Series, Honda knew that it had to make a big splash with the Civic. And, as you can see, it has certainly done that, with the three-door successfully developing the styling cues of the five-door, which has been turning heads since its launch. The removal of the rear doors means the new model has an even simpler shape than its brother – lacking any shutlines to break up the side profile. In this guise, the Civic looks purer and more rakish than ever. As seen in these latest image further enhancements include sporty side skirts as well as front and rear splitters.

Adding to the sporty look is a glass roof, which extends from the windscreen and almost meets the tailgate. Similar to Opel’s Astra Panoramic, this will give drivers a unique view of the road ahead, as well as allowing lots of extra light into the cabin. It's likely to be an optional extra, with a price tag of around 1 000 Euros.

Under the bonnet, the three-door model is set to share the same engine line-up as the five-door, with two petrol powerplants – an entry-level 83-bhp 1.4-litre and a 140-bhp 1.8-litre VTEC unit – plus the firm's excellent 140-bhp 2.2-litre i-CTDi turbodiesel. All models will feature six-speed manual gearboxes as standard.

However, while the engine range will remain unchanged from the five-­door car, Honda engineers will tweak the suspension set-up for sharper responses, in line with the three-door's sporty image – so it promises to be even more fun to drive. It's set to be unveiled at the British Motor Show in July, and sales will start in the summer, with prices similar to the five-door.

At the same time, the wraps will also come off the eagerly awaited Type R hot hatchback. With power coming from a 197-bhp 2.0-litre VTEC engine, it should deliver the benchmark 0-100 km/h sprint in 6.5 seconds and have a top speed of 240 km/h. The flagship model is likely to cost in the region of 26 000 Euros when it hits showrooms next year.