Mercedes has revised its 2017 roadmap and it no longer includes the rumored GLA Coupe.

It was only yesterday when we published a roadmap showing Mercedes’ plans for 2017 and now it seems the company with the three-pointed star logo has already made a change. There’s no sign of a “GLA Coupe” anymore as the model has been replaced by the facelifted version of the regular GLA.

Was it an intentional mistake to announce a coupe-ified GLA is in the works? We don’t know. Maybe the model was indeed on the agenda at the time when the initial version of the roadmap was made and it was canned later, but Mercedes simply forgot to update the roadmap.

For what it’s worth, there was a rumor regarding the existence of a GLA Coupe, but not before 2019. In addition, the model was said to be based on the second generation of the crossover, not on the current version as indicated by the roadmap. 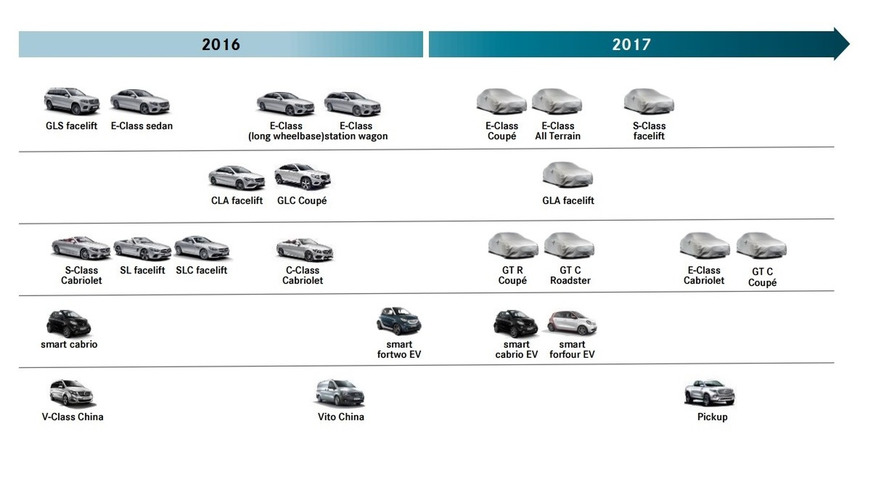 Based on spy photos, the GLA facelift will bring only very subtle styling tweaks as it was the case with the refreshed CLA models, so it comes as a surprise that Mercedes will wait until 2017 to introduce its updated high-riding model.

There aren’t any other changes in the roadmap, so the E-Class Coupe, Cabrio, and All Terrain are still pinned for next year’s launch, as are the GT C Coupe and Roadster along with the Navara-based pickup that could be called GLT. As for Smart, the electrified ForTwo Cabrio and ForFour will be out in 2017 and will follow the equivalent version of the ForTwo Coupe set to arrive in the months to come.