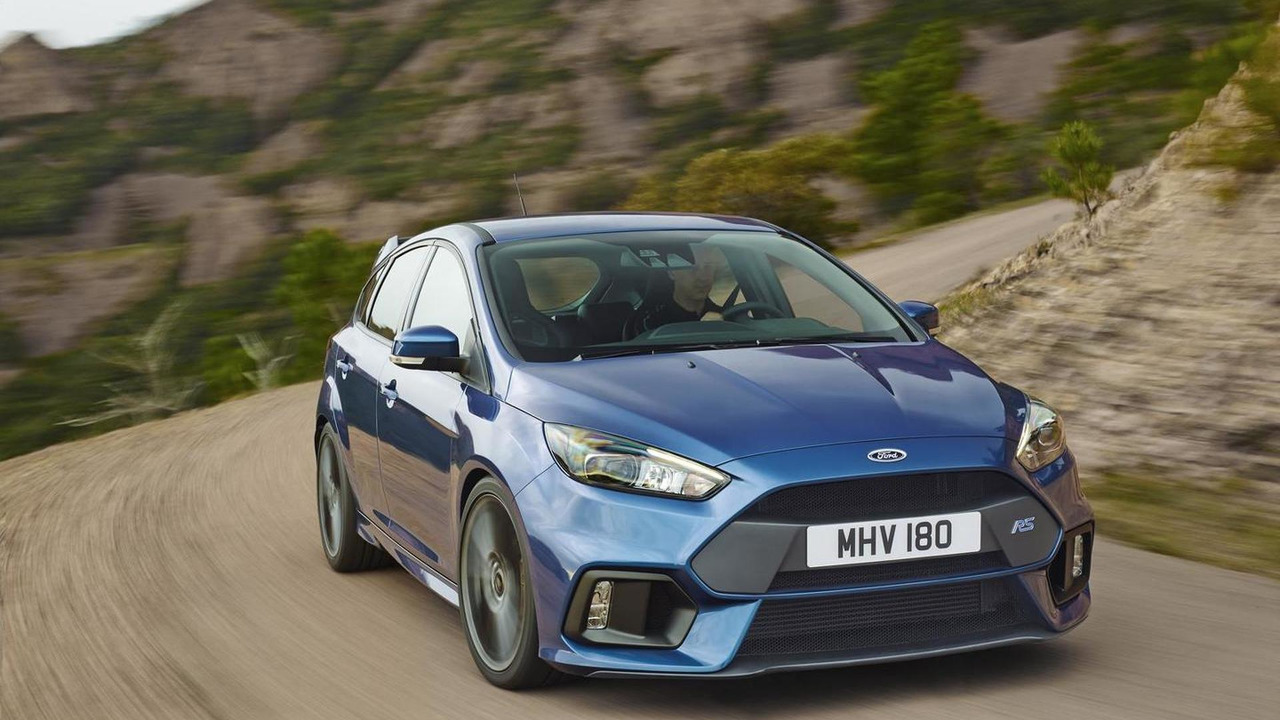 This is the first generation of the Focus RS to go on sale in America.

Americans can finally head down to their Ford dealer and drop at least $36,605, including destination and delivery, to leave doing a smoky drift in a brand new Ford Focus RS. The Blue Oval already delivered the first example in the U.S. to Jackson Gilmore from California.

In case you forgot after Ford’s constant teasing last year, the Focus RS packs a 2.3-liter turbocharged four-cylinder that makes a robust 350 horsepower (261 kilowatts) and 350 pound-feet of torque (474.5 Newton-meters). The RS channels that power exclusively through a six-speed manual and sends it to a torque-vectoring all-wheel-drive system with multiple modes, including a Drift setting. The boiling hot hatch can sprint to 62 miles per hour (100 kilometers per hour) in 4.7 seconds and eventually reach 165 mph (265.5 kph).

Gilmore ordered his RS eights months ago, and he even held off buying a new car when he first heard rumors about it. He’s very excited about the hot hatch in the interview below.

While the Southern California-based Gilmore probably doesn’t have to worry about snow, Ford has a winter wheel and tire option on the RS for people that drive in cold weather – it’s also standard equipment in Canada. The pack includes a set of Michelin Pilot Alpin PA4 tires and 18-inch wheels, plus accessories like center caps and tire-pressure monitors.

For customers who are even more patient, spy shots indicate Ford has an even hotter RS500 under development. There are no official details yet, but carbon fiber body panels might help the model shed weight. Vents in the hood suggest a more potent engine, too. Expect the RS500 to debut some time before for the next-gen Focus’ unveiling, which is likely in the latter half of 2017.

The Focus RS is now arriving at dealerships across the U.S. at a starting price of $36,605, including destination and delivery

Specially-designed 2.3-liter EcoBoost engine produces 350 horsepower and 350 pound-feet of torque, plus a maximum speed of 165 miles per hour

DEARBORN, Mich., July 13, 2016 – The wait is finally over. The highly coveted, all-new Ford Focus RS is now arriving at dealerships across the U.S. and for Jackson Gilmore – the first customer to take delivery of his RS – news of the car’s arrival was so big he ditched work to get behind the wheel.

“Learning that [my Focus RS] was going to be on one of the first boats to the West Coast, it became real,” he said. “Out of the blue my dealership called me and they said ‘Hey, your RS is here, so I sent an email to my boss that said, ‘Hey, I ordered this car eight months ago, I’m taking a half day today,’ and I just kind of walked out of work. I just bounced right then.”

Gilmore might have been the first in the U.S. to slide into the driver’s seat as the owner of the new high-performance hatchback, but the Focus RS was no impulse buy. As soon as Focus RS rumors began swirling, Gilmore held off on purchasing a new car.

“Then they said they were going to make it, it’s going to be all-wheel drive, 300-plus horsepower, they’re going to bring it to the States – and I told my girlfriend, you know, that’s the car,” he said. “I’m going to buy that.”

He has good reason to be excited. Powered by a specially engineered version of Ford’s new 2.3-liter EcoBoost engine, the new hot hatch pumps out a monstrous 350 horsepower, 350 pound-feet of torque achieved with 93-octane fuel and features a bevy of tricks up its sleeves in order to offer a premium driving experience, including four different drive modes.

It’s also the fastest production Focus currently available in the world, dashing from 0-62 miles per hour in just 4.7 seconds and topping out at a maximum speed of 165 mph.

The impressive engine output comes courtesy of an all-new, low-inertia twin-scroll turbocharger with a larger compressor wheel that delivers more airflow and power throughout the rev range. Despite the engine’s high output of 152 horsepower per liter, RS engineers tuned this EcoBoost to deliver right off idle all the way on up to a free-spinning 6,800 rpm.

“You start it up, it’s got a little bit of a growl to it, it rumbles,” Gilmore said. “You kind of know you’re in something serious.”

Designed by a small team of Ford Performance engineers in Europe and the United States, the manual-only Focus RS comes packed with innovation such as Ford Performance all-wheel drive with Dynamic Torque Vectoring for a new level of handling, grip and cornering speed.

“It’s definitely quick. It’s got power, but the biggest thing I noticed is the handling,” Gilmore said. “I think it’s glued to the road; it’s super tight … so as soon as you move the wheel it just points in and hugs the turn. It’s awesome, honestly.”

That performance extends to brutal winder conditions, too. The Focus RS is the first car in North America to offer a winter tire and wheel option as a factory accessory, featuring Michelin Pilot Alpin PA4 tires, pressure monitoring sensors and fully mounted center caps, all of which were tested in the extreme cold and snow of Northern Michigan and Sweden.

Even in the event of an engine stall, the Focus RS comes prepared with a handy trick called stall recovery. There will be no need for drivers to manually restart the engine or move the gear selector to neutral, as the innovative technology allows the driver to simply push the clutch back in after a stall and the engine will restart.

Like its siblings, the Focus RS also comes equipped with plenty of cargo space, making it perfectly capable of adapting to the needs of most any driver.

“I actually play ice hockey and, you know, I drive it every day and I can throw my hockey gear in there, the hockey sticks, and throw everyone in – I live right next to the beach,” Gilmore said. “Having that performance with all the room” is great, he added, “but I also like the way it looks.”

The Focus RS starts at $36,605 in the U.S., including destination and delivery.

Ford Motor Company is a global automotive and mobility company based in Dearborn, Michigan. With about 201,000 employees and 67 plants worldwide, the company’s core business includes designing, manufacturing, marketing, financing and servicing a full line of Ford cars, trucks, SUVs and electrified vehicles, as well as Lincoln luxury vehicles. At the same time, Ford is aggressively pursuing emerging opportunities through Ford Smart Mobility, the company’s plan to be a leader in connectivity, mobility, autonomous vehicles, the customer experience, and data and analytics. The company provides financial services through Ford Motor Credit Company. For more information regarding Ford and its products worldwide or Ford Motor Credit Company, visit www.corporate.ford.com.