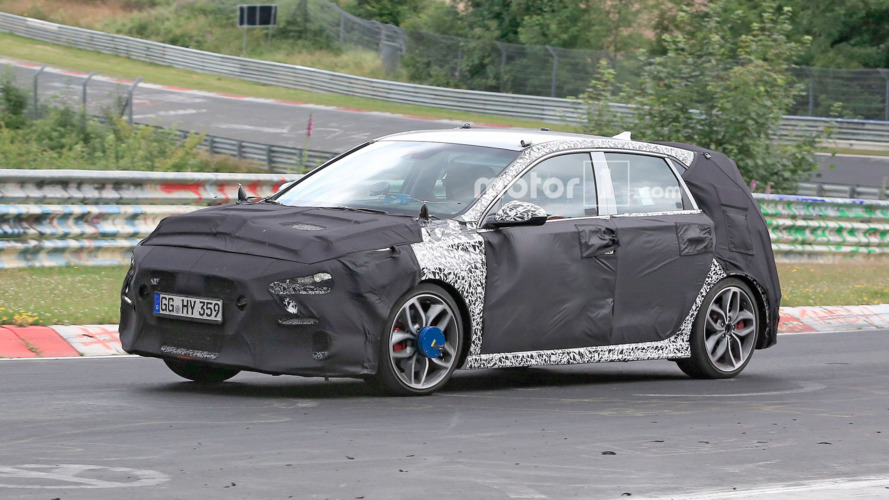 The hot hatch looks great on the track.

Hyundai continues to hone its i30 N hot hatch on the Nürburgring Nordschleife, and a new batch of spy shots let us see it at work there again. The license plate here is the same as the most recently photographed example, but this time the helmet-wearing test drive really appears to be earning his pay around the tough track.

While it’s probably the same car, these shots give us a fresh look at the i30 N. The headlights are on, and their slanted position looks very aggressive. Lower down on the fascia, you can also see the LED running lights. This i30 N also seems to have sensors over the front wheels, and we would presume they're monitoring the hot hatch’s performance. The fabric covering the rear doesn’t do much to hide the rectangular taillights and leaves the dual exhaust pipes completely bare.

The i30 N uses a 2.0-liter turbocharged four-cylinder engine, and an earlier teaser shows the powerplant making 260 horsepower (194 kilowatts) and 228 pound-feet (309 Newton-meters) of torque when testing on a dyno. However, the production version could have even more. The hot hatch turns the front wheels through a six-speed manual gearbox, and an automatic should join the lineup later. As the relative lack of body roll in these photos suggest, Hyundai's N division outfits the model with a stiffer suspension, which should let it be a sharp handler. You can also spot the upgraded brakes through the wheels.

Hyundai still has a little more time to sharpen the i30 N on the Nürburgring because it doesn't go on sale until 2017. The company reportedly also plans to offer a track-focused performance pack, which could be quite a potent ride around the 'Ring.

New Hyundai i30 N version spied at the Nurburgring