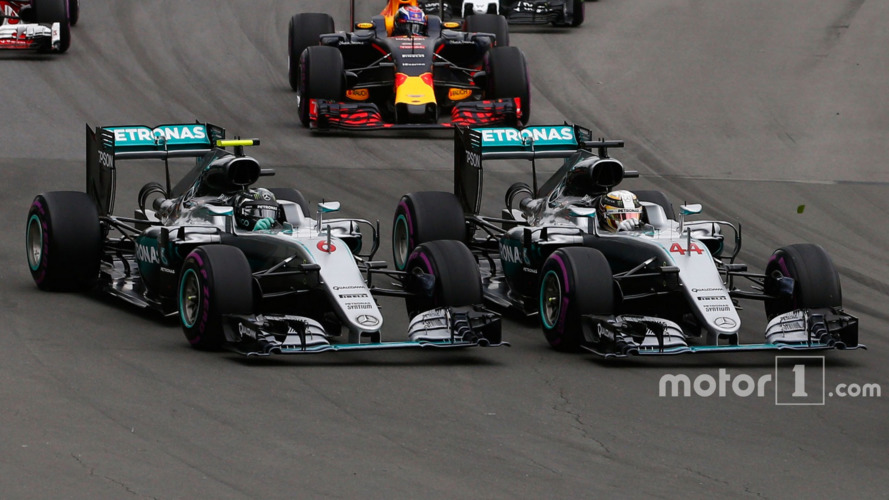 Lewis Hamilton and Nico Rosberg remain free to race for now after a meeting with Mercedes team bosses at their Brackley factory on Thursday.

Mercedes had threatened to bring in team orders in the wake of the collision between Hamilton and Rosberg in Austria, but in the end it has elected not to hold the pair back.

Following discussions between the drivers, and team bosses Toto Wolff and Paddy Lowe, over the course of several meetings it was made clear that the pair would be free to continue their battle for the title, but would have to operate to tougher rules of engagement.

A statement issued by the team said: "This freedom comes with a duty for our drivers to respect the values of the team.

"In the past five races, there have been three incidents which have cost us over 50 points in the constructors' championship.

"We have therefore strengthened our Rules of Engagement to include much greater deterrents to contact between our cars.

"With these in place, we will trust our drivers to manage the situation between them on track. Their destiny is in their own hands."

Mercedes did not explain what the 'deterrents' were, although they could be related to potential threats of tougher action in the future or penalties in the event of there being fresh contact.

The team also confirmed that non-executive chairman Niki Lauda, who caused some controversy this week with remarks about Hamilton, was not present at any of the meetings that took place.

Despite ruling out team orders getting in the way of their battle for now, Mercedes has left the door open for instructions in the future to protect its constructors' championship position.

It also said that team orders would be reconsidered if Hamilton and Rosberg do clash again.

"The drivers were also reminded that we may issue instructions during the race to protect against a potential loss of constructors' points, such as we did at this year's Monaco GP when Nico was instructed to let Lewis pass.

"If the drivers do not honour the revised Rules of Engagement, we may impose team orders as a solution of last resort."

Although the latest situation between the Mercedes drivers comes at a time that Rosberg is discussing a new two-year contract, the team reiterated its confidence that the pairing was the best it could have in F1.

"We restated our belief in Lewis and Nico as the best driver pairing in Formula 1," he said.

"Since 2013, we have won together a total of 43 races and 40 further podium finishes, plus two consecutive world championships. This record speaks for itself."