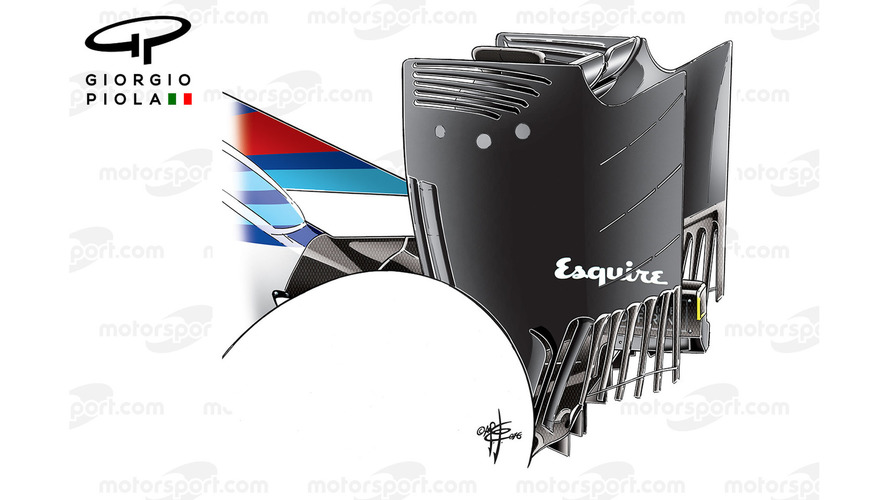 Giorgio Piola and Matt Somerfield look at the updates ran by McLaren, Williams and Manor during the Austrian Grand Prix.

McLaren arrived in Austria with great hopes for its new rear wing design but after a short trial in FP1 it was decided that it would not run it for the remainder of the weekend.

The new, complex rear wing design will be trialed again, with some revisions, at Silverstone but inconsistencies shown during the Friday session has McLaren reconsidering its merits.

The radical-looking endplates are paired to a conventional mainplane and top flap, albeit run at an angle more aggressive than you’d expect in order to utilise the changes made to the endplates.

The slot that usually runs up the leading edge of the endplate is supplemented by another just behind it, meanwhile the gradient slots that usually sit below the line of the mainplane were removed in order to allow for the extremely tall slots that are the main feature of the new design.

Adding rigidity and controlling the direction of the airflow around the endplate are three horizontal strakes, which are ordinarily placed at much steeper angles on the endplate.

The changes are keyed to not only improve the rear wing's performance but also work in tandem with the diffuser, which was also slightly revised.

The front brake duct also featured a change, with the drum reshaped to change how the air and heat move internally and between the surface of the drum and wheel rim.

The drum has been reshaped, with a tapered surface used as the drum meets the main vertical fence (note the flat surface of the older specification in the inset).

This allows the airflow taken in between the vertical fence and tyres sidewall a space to occupy, changing how heat radiates from the brakes to the wheel rim, which affects a specific region of the tyre.

Changing the internal temperature of the tyre, especially near the tyres shoulder can do wonders for its performance and improve degradation.

A vertical inlet sits on the taper line and allows the air to travel between the drums surfaces, mixing with the airflow inside the drum, reducing the operating temperature of the brakes.

Williams flew in two new front wings on Friday night to try and improve its position in relation to those it is chasing, whilst trying to thwart the threat that Force India pose in the championship standings.

The wing used by Valtteri Bottas was very similar to the previous configuration, albeit painted with a new finish that increased the surface roughness, similar to a sharks skin.

This paint disturbs the airflow over the wing, improving performance, whilst also preventing any tyre debris from sticking to its surface.

As a result the two small ‘teeth’ mounted on the second flap of the mainplane, ahead of the trailing strakes were removed too.

Felipe Massa was given the all-new design, with numerous changes to improve how air moves rearward over and around the front tyre.

[1] The ‘r’ cascade shape was completely changed with the leading edge swept much further back and angled toward the main cascade.

[2] Mounted within the main cascade was a new vertical vane that is aggressively angled outward to improve how the airflow is moved outward. A small slot can be found just off the leading edge which helps to overcome the angle of incidence at certain yaw angles.

[3] At the base of the main cascades support another slot has been placed in the surface, meaning less flow impingement.

[4] The outer endplate canard has been reshaped and its angle increased to change how the pressure builds it, changing the shape of the wake it sheds and how it pulls on the other airflow structures around it.

The Brazilian utilised the wing during qualifying but, in pre-race preparations, the team noticed damage to the wing, likely caused by the kerbs, which meant it couldn’t be used.

As it was the only one available to the team, Massa was forced to start from the pitlane and reverted to the same specification as Bottas.

Williams introduced a new wing in Baku, although Massa did briefly utilise it in Montreal before running into problems with his DRS, destroying the wing in the ensuing accident.

The wing features a new set of endplate louvres which arch downward rather than simply following a straight line, changing how the tip vortex forms at the flap and endplate juncture, hopefully resulting in more downforce and/or less drag.

What wasn't noticed in Baku though was the change made at the base of the endplate, with the main slot in the support leg increased in height and another arched slot added ahead of it.

These have been added to change the way in which the endplate interacts with surrounding components, such as the diffuser, hopefully improving the net performance of the car.

Pascal Wehrlein put in a stunning performance during the Austrian GP weekend, not only taking advantage of others' mistakes but also taking a surprise leap in pace relative to his competitors.

The German driver was provided with a new specification of front wing, whilst Rio Haryanto had to make do with the previous specification.

The new wing featured a revised flap support, which increases rigidity and the way the flaps operate under load.

The previous specification (left) had a very small metal support to bridge the mainplane with the upper flaps, whilst the new version (right) features a more substantial metal swan neck support.

The outer portion of the front wing on all the challengers should remain relatively rigid, whilst the inboard flapped section, which can also be adjusted to trim the balance of the car usually deforms under load, closing the gaps usually visible between the flaps.

This distortion of the flaps is what Manor is ooking to avoid with the new support, improving the way in which airflow moves around the outboard part of the wing even when loaded.

We also understand changes have been made to the front suspensions third element, as the team look to make mechanical setup improvements, which will also dictate tyre performance and degradation, something that may have been improved relative to others by the new tyre pressure protocols too.