The meaner Focus RS prototype is back at the Nordschleife flaunting a larger rear wing.

Remember the glorious Focus RS500? It was the very best Ford had to offer in terms of performance for the compact hatchback’s second generation and now it seems there’s a new hardcore version in the same spirit. We can actually see the hood of this prototype closely resembles the one on the previous RS500 with those dual vents providing extra cooling for what will likely be an upgraded engine.

As these spy images indicate, there will be more to the go-even-faster Focus RS than a beefier 2.3-liter EcoBoost engine. The prototype caught recently at the ‘Ring also had a modified rear wing with a metal add-on component affixed to the upper part. In addition, the outer edges of the front bumper had some extra bits while the bumper itself was hosting a pair of enlarged vents. 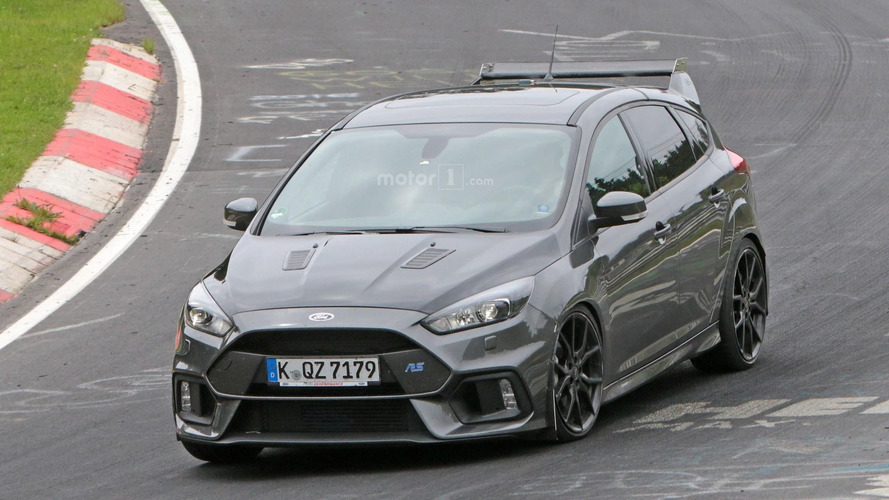 Some are saying that Ford has plans to shave off as much as 220 pounds (100 kilograms) by installing carbon fiber brakes, forged aluminum suspension parts, and carbon fiber reinforced plastic body panels. For the same purpose, a stripped-out interior with less noise insulation is apparently on the agenda as well. Add into the mix a rumored electronically controlled limited-slip differential for the front axle, and the special edition model is shaping up to be the ultimate road-going Focus ever.

As a matter of fact, sources close to Ford are saying the limited-run Focus will be the “fastest-accelerating hatchback in history.” If that will turn out to be true, it means the Focus RS’ sprint to 62 mph (100 kph) in 4.7 seconds will drop to below the 4.2 seconds needed by the Mercedes-AMG A45 facelift.

However, don’t get too excited just yet. Autocar has learned from insiders the prototype spotted at the Nürburgring might not belong to Ford after all. They say it could be owned by an aftermarket company since Ford might not feel the need to do another RS500 taking into account the regular model has already turned out to be a massive hit.

If Ford is indeed planning a more focused Focus RS, it will probably be out either by the end of the year or early 2017. We are making this assumption based on the fact the fourth-gen Focus will arrive in the second half of next year. The previous RS500 served as the Focus II’s last hurrah, so we imagine that’s going to be the case with this new version as well.