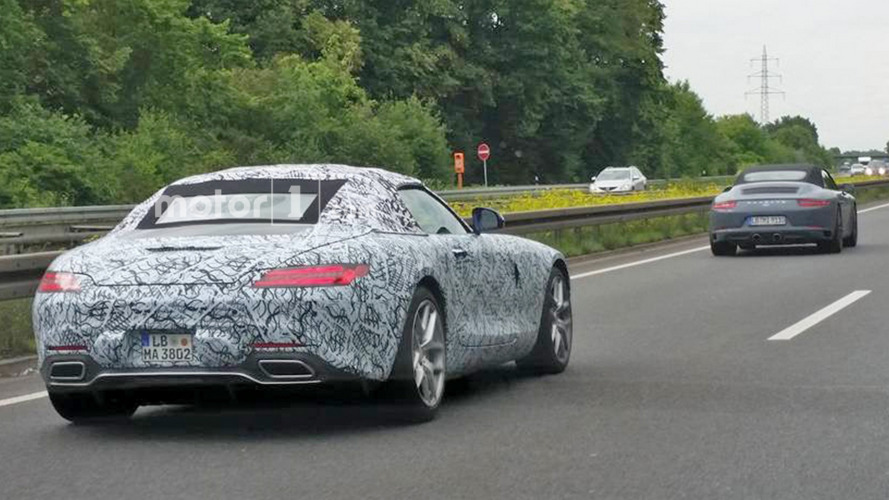 Caught being benchmarked against a Porsche 911 Cabriolet.

Mercedes-AMG recently introduced GT R at the Goodwood Festival of Speed but it appears the company is already hard at work on the next variant as spy photographers have snapped two photos of what appears to be the GT Roadster.

Caught being benchmarked against a Porsche 911 Cabriolet on the Autobahn, the Mercedes-AMG GT Roadster has a familiar design but adopts a power retractable soft top and a large rear trunk with an integrated third brake light.

The interior will largely carryover from the coupe but we can expect an assortment of minor changes including new controls for the roof and the possible addition Airscarf seats.

Engine option will include the usual suspects so expect to see an entry-level variant with a 4.0-liter biturbo V8 engine that produces 456 horsepower and 443 pound-feet of torque. This enables the standard model to accelerate from 0-60 miles per hour in 3.9 seconds before hitting a top speed of 189 mph, so expect similar numbers from the Roadster.

Buyers with deeper pockets will likely be able to order a Mercedes-AMG GT S Roadster.  This particular model is slated to use an upgraded V8 engine which develops 503 hp and 479 lb-ft of torque.  The powertrain enables the coupe to rocket from 0-60 mph in 3.7 seconds and onto a top speed of 193 mph.