Learning to love equilibrioception and the minimum-jerk theory. No, seriously.

If you want to understand how a driver-focused car company can adapt to the 21st century, Mazda is the new case study.

The Japanese automaker has pledged to reduce consumption, improve driveability, and lighten all the things. But you hear that from every automaker. What's setting Mazda apart isn't just improving the greasy and sticky bits – it's figuring out how to make the driving experience subtly better with software and science.

Stay with me on this.

Historically, anything getting between car and driver was anathema to purists. It probably started when Karl Benz made the bold decision to relocate the transmission lever from his rectum to the driver's side for easier, if less gratifying, operation. But technology evolves and improves and new norms are established and... progress! 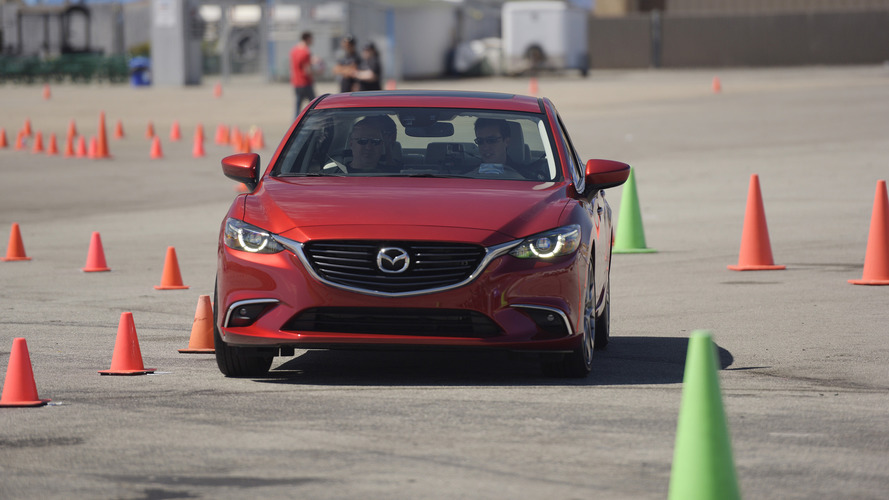 Mazda used some code, a couple sensors, and a bit of ignition timing to make you feel ever-so-slightly more heroic going through a corner.

Unfortunately, enthusiasts have been burned too many times by half-baked technologies. Early ABS wasn't good for anything but demonstrations for a decade. That gave way to some of the first traction control systems, which were, predictably, crap. Now, there are enough sensors and computing power that cars can hold a four-wheel drift without a driver. Unfortunately, for every Evo 9 with a Cray supercomputer, we also got a Saturn Sky running a Commodore.

Today we're at the point where – given the right combination of resources and driving nerds – engineers can amplify the driving experience with such a level of precision and restraint that you start to question the electro-nanny naysayers. Mazda's G-Vectoring Control is just the latest evidence that technology and science can (shocker!) make driving better.

Now, while I'm sure you'd like to get into the weeds discussing equilibrioception and minimum-jerk theory, I'll spare you the rundown of Mazda's eight years of exhaustive research and instead share this video, which is partially relevant.

"The seat of your pants is actually in the back of your neck," says full-time Mazda vehicle development engineer and part-time philosopher, Dave Coleman.

Coleman is part of a bicontinental team tasked with figuring out how to connect the grey matter between your ears with the greasy bits under the hood. To understand, you just have to get two things: how humans anticipate and react to movement and how good drivers play with weight transfer.

Let's get the veggies out of the way now.

First, understand that humans instinctively want to hold their heads upright. It's the primary way our lizard brain keeps tabs on our equilibrium, and the clearest evidence is our friendly and patient fowl above. Secondly, our body unconsciously prefers smooth motions and uses tiny – but measurable – muscle movements to make that happen. 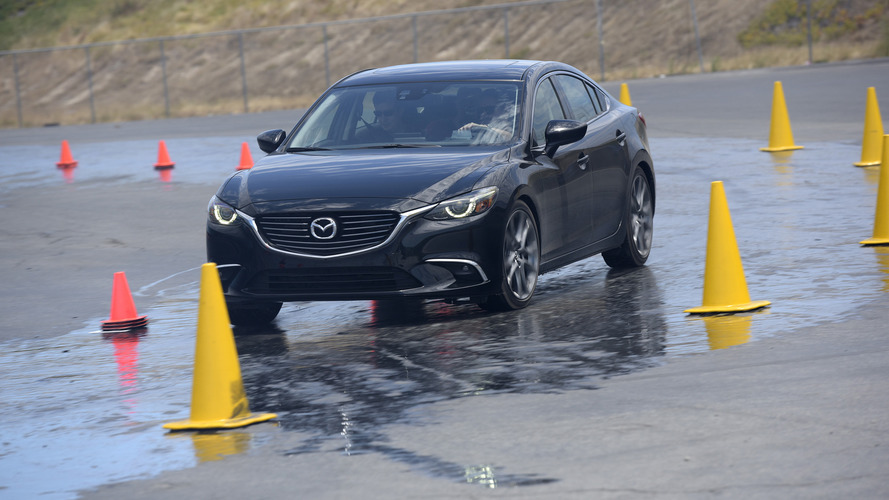 This isn't "torque-vectoring" in the traditional sense.

Why does this matter? Your calf is indirectly connected to your neck. Squeeze the throttle and your body has learned to anticipate the force of acceleration and tense certain muscles in reaction. If that force isn't what your body expects, you lose confidence, and that's what Mazda's trying to eliminate.

Mazda took that research and studied how hotshoes transfer weight to increase grip. When a driver lifts off the gas, the car's weight moves forward, changing how the tires bite into the road. It also creates a sensation of a more direct connection between the tires and the palms of your hands. Left-foot-braking takes that even further, shifting weight more dramatically, and when done right, you feel superhuman.

Mazda thinks it can automate that feeling. 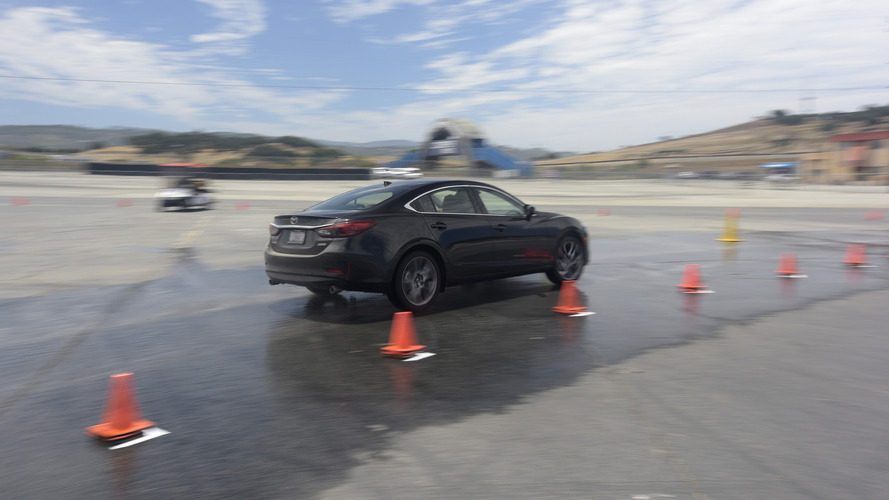 Engineers can amplify the driving experience with such a level of precision and restraint that you start to question the electro-nanny naysayers.

Just for clarity's sake, let's point out that this isn't "torque-vectoring" in the traditional sense. There's no unnatural force (say, the brakes or a computer-controlled diff) applied to change the attitude of the car. That stuff tends to take too long. If you want to use the brakes to affect the dynamics of the car, the computer has to send a signal to the master cylinder which has to pressurize the brake lines, send fluid to the caliper, press the brake pistons against the pads to clamp onto the discs and, well, the driver is going to notice. So Mazda took a different tack: it used some code, a couple sensors, and a bit of ignition timing to make you feel ever-so-slightly more heroic going through a corner. Well, maybe not heroic. Let's go with confident.

The system looks at vehicle speed and steering angle – down to a tenth of a degree – and then sends a signal to the engine to retard the timing, imperceptibly reducing torque. That transfers a subtle amount of weight to the front tire, boosting cornering force, and weighting up the steering wheel. And it all goes down in 30 milliseconds.

While this this all looks good on paper and PowerPoint, skepticism is warranted. This is the point where you'd expect me to wax poetic about my revelations about steering feel while sliding sideways down the Corkscrew. 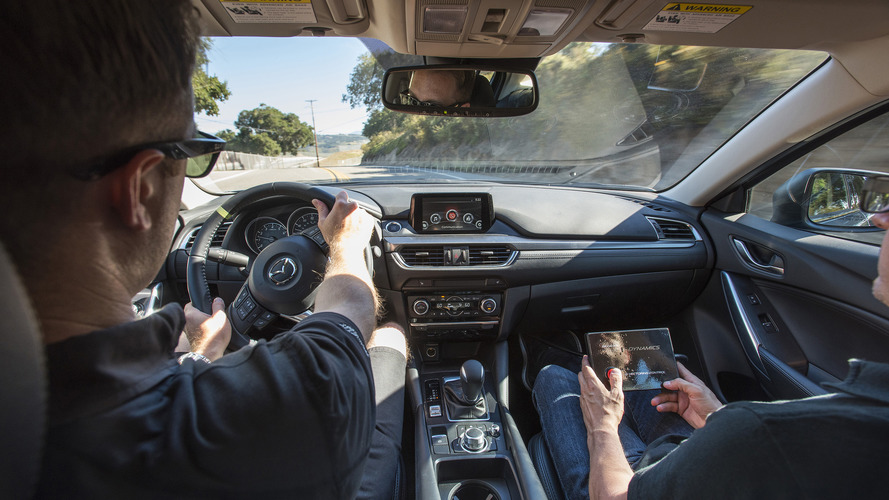 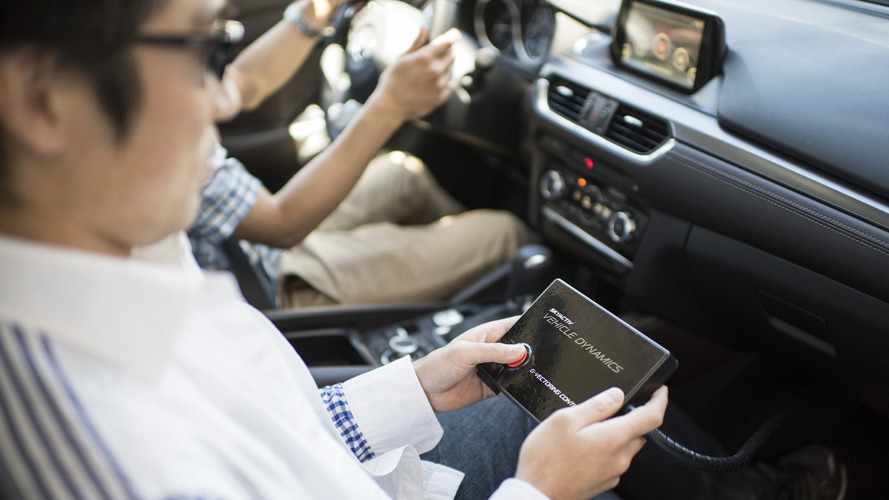 Switching the system off and on, half of me is convinced this is brilliant.

Nope. I was pointed towards 1,400 traffic cones situated on the infield of Mazda Raceway Laguna Seca and told to set the cruise at 20 miles per hour.

Clearly, there was a method to Mazda's madness. More clearly: this is not a system that Scott Pruett is going to appreciate while blasting down the Nordschleife at eleven-tenths. But on a dry oval course with an engineer to my right holding a black box with a launch-the-nukes red button, I feel it. I think. Maybe. Yeah! Wait. Hmm.

Switching the system off and on, half of me is convinced this is brilliant. The other half is trying to figure out exactly when I succumbed to Stockholm syndrome. (Was it before or after the philosophical discussion of Jinba Ittai and Hashiru Yorokobi?)

Then we got out and looked at the data.

This could make people's time behind the wheel invisibly better.

Science tells the story. My steering wheel inputs were smoother, with less hunting mid-corner and a cleaner line next to the cones. All of this was amplified during a simple straight-line exercise down the pits at a steady 30 miles per hour. With a narrow lane between a concrete wall and a series of pylons, you notice even the tiniest input you make into the steering wheel. With GVC on, no problem. With it off, still no problem, but those barriers felt a little closer and I was conscious of every millimeter I moved the wheel.

That's when I realized this system isn't just for nerds like us that notice every tweak we make to the wheel mid-turn. This could make people's time behind the wheel invisibly better. Driver fatigue could be reduced, passengers would feel more comfortable, and minimizing cognitive load is a win for safety. Here's another win:

It's not the traction control keeping it in line; it's the driver catching the slide. The system anticipated his reaction and tweaked the torque output, but he also had enough information to avoid overcorrecting.

Outside the testing grounds and the controlled confines of the race track, the effect is significantly more subdued. It's hard to put a finger on, despite my fingers being all over it. But that was clearly the point.