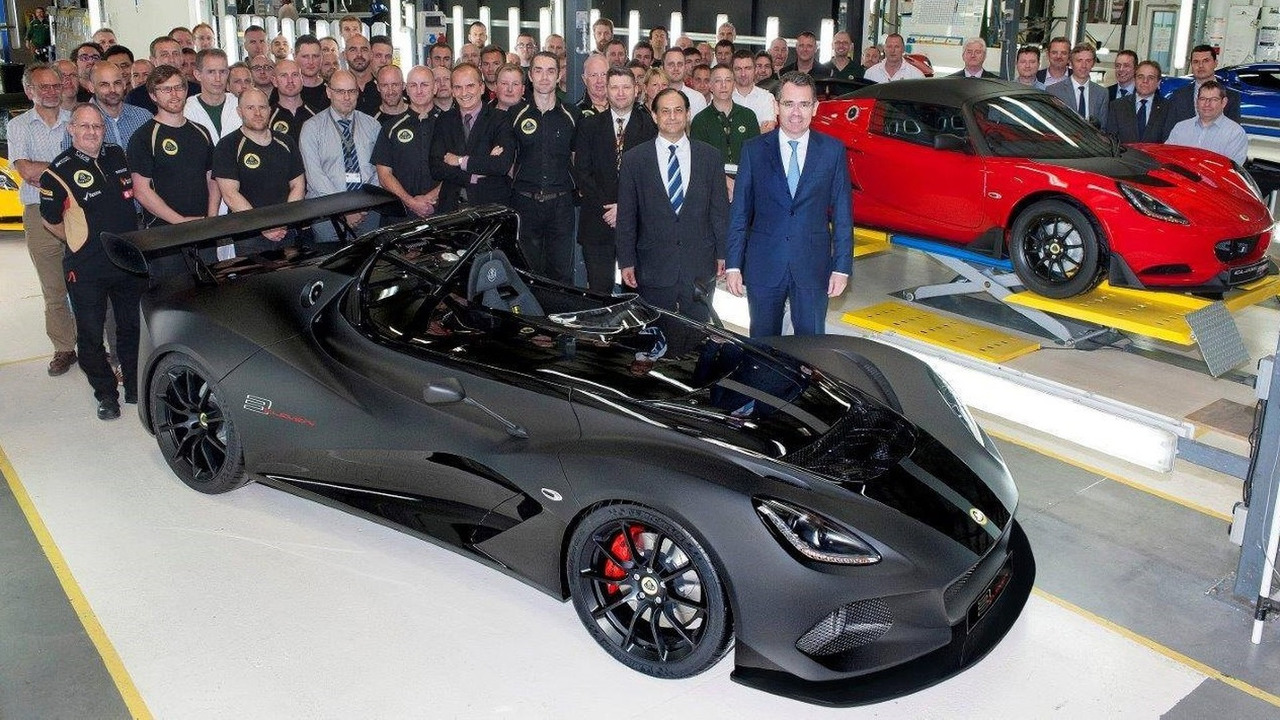 Lotus has commenced production of the 3-Eleven and Elise Cup 250 this week at its Hethel plant in Norfolk.

Even though the 3-Eleven was unveiled exactly one year ago at the Goodwood Festival of Speed, it’s only now the first customer car has left the Hethel production line. Billed as being Lotus’ fastest and most expensive road-going production car ever, the 3-Eleven has set a sub-7 minute lap time around the Nurburgring, but we’ll believe Lotus when it will release video proof. The people from Norfolk did publish a video with the car at the ‘Ring last November, but that wasn’t the record-breaking attempt.

Lotus has plans to make just 200 units of the Elise Cup 250 annually and will charge you extra for the optional hard top.

• Lotus 3-Eleven presented at the 2016 Goodwood Festival of Speed

Ready to humble some of the fastest cars that money can buy, two of the greatest, most extreme Lotus models ever produced, the Lotus 3-Eleven, finished in matt and gloss Black colour scheme and the Lotus Elise Cup 250 in Red, have driven off the production line for the first time at the famous Hethel factory.

The two, hard-hitting lightweights represent the latest generation of Lotus sports cars, combining high-output engines with the company’s dedication to cutting mass, and so boosting performance through intelligent engineering. Developed through the company’s Lightweight Laboratory philosophy, every component in each as been assessed, optimised and re-engineered as required.

Surrounded by some of the production and engineering teams responsible for the two cars, Jean-Marc Gales, CEO of Group Lotus plc, commented: “The lucky owners of these will be the first to find out just how special the latest Lotus cars really are. We’ve raised the bar yet again, to produce two vehicles which the competition cannot hope to match. From the outright firepower of the 3-Eleven, to the sublime handling of the Elise Cup 250, these cars, better than any other, encapsulate our ‘light is right’ mantra.”

Showing clear intent for the Lotus high-performance sports cars of the future, the 3-Eleven is the company’s quickest and most expensive series production car ever.

The 3-Eleven offers a giant-slaying power-to-weight ratio, thanks to a revised V6 supercharged engine developing 460 hp, to provide in excess of 500 hp per tonne. It is capable of sprinting from 0-60 mph in 2.9 seconds before reaching a maximum speed of 180 mph (290 km/h).

As part of its development the Lotus 3-Eleven spent time at the Nürburgring Nordschleife, where it was one of the fastest road going cars to ever tackle the track, capable of setting a sub-7 minute lap time.

One year on from its global unveiling, this matt and gloss Black 3-Eleven will be on display at this years’ Goodwood Festival of Speed with Bell & Colvill, the most successful and longest serving Lotus dealer in the world. A second giant killing Lotus 3-Eleven will be taking part in the Michelin Supercar run on all three days of the Festival.

With the Lotus Elise recently crowned as Readers’ Champion during the Autocar Awards, this latest version of the legendary car is the faster ever - with a 0-60 mph in 3.9 seconds and a top speed of 154 mph (248 km/h).

Powered by a new higher-output version of the supercharged, 1.8-litre 4-cylinder engine, the Elise Cup 250 boasts 243 hp. However, in order to make the most of its power, it’s shed 21kg compared to its predecessor, to weight just 931 kg. Customers wanting to cut weight still further, and so boost performance, can select the optional Carbon Aero Pack to reduce the vehicle’s mass to 921 kg.

The hand-built sports car has long been regarded as a benchmark within the industry, providing a level of precision and driver involvement that rivals cannot match. Capable of lapping the company’s test track in 1 minute 34 seconds, the changes and engineering adaptions to the Elise Cup 250 have taken an impressive four seconds off the previous Elise Cup 220’s best time.

The arrival the new cars coincides with the 50th celebrations for the founding of the famous factory in Hethel, Norfolk, when, in 1966, founder Colin Chapman moved Lotus to the purpose-built facility. Lotus is marking this milestone in the company’s history with special edition cars and events throughout the year.

Every new Lotus 3-Eleven and Elise customer can personalise their vehicle through the Lotus Exclusive programme. Developed by the Lotus Design team, it combines traditional British craftsmanship with the best of modern design. Conceived to inspire customers, allowing them to tailor vehicles to their personal taste, it offers a comprehensive array of options and provides an alluring alternative to an off-the-peg sports car.