Mazda MX-5 gets reupholstered in denim by Garage Italia Customs 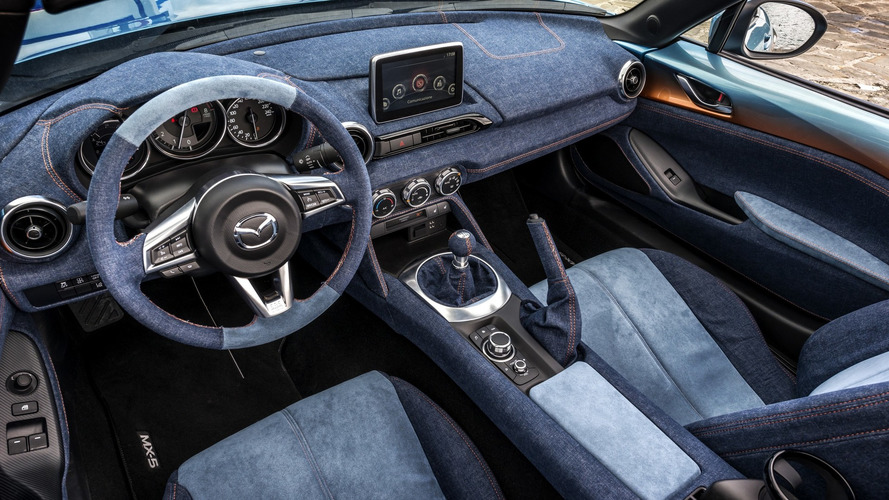 Denim finish on the inside combined with a sunset look on the outside.

Shortly after dressing up the BMW i8 in a livery inspired by a painting, Garage Italia Customs embarked upon another project with an entirely different car. This time around, it’s a latest-generation MX-5 and the source of inspiration was yet another form of art, the glamorous motion picture. To be exact, the folks behind the project thought of Bruce Brown’s 1966 “Endless Summer” movie when they customized the roadster both inside and out.

What you see here was actually commissioned by zoom-zoom itself, Mazda. Work started on the outside where the Miata received a unique livery to mimic the “long summer sunsets” with a bright orange hue that fades in indigo above the waistline to give the MX-5 a special look. Garage Italia Customs picked from Mazda’s accessories line a 17-inch diamond-cut alloy wheel set to go with the new body look.

The two-tone appearance of the exterior continues inside the cabin which has received a predominantly denim finish with orange accents to provide contrast and boost the visual impact. The seats combine a washable denim upholstery with Alcantara finished in a nautical blue tone which has also been applied onto the door handles.

Strictly a one-off project, the Mazda MX-5 Miata by Garage Italia Customs has been baptized “Levanto” as a nod to the municipality in the La Spezia province in Italy known for its crystal clear water and considered to be the place where Italian surfing came to life.

Natural complement of Takumi could only be evidently the "Maestros" of Garage Italian Customs, specialists with unique skills and absolute exceptionality in customization of products already representing already the excellence in standard products realization.

The creative idea of this spectacular interpretation of the MX-5 comes from the creativity of Lapo Elkann and from the movie The "Endless Summer", the legendary 1966 Bruce Brown film considered a masterpiece of documentary film on the Surf.

The plot of the film tells the story of two American boys who embark on a trip between New Zealand, Australia, Africa and Tahiti and literally chasing the summer - which thus becomes endless - traveling around the globe, always searching for the perfect wave, introducing in each visited country the Surf as a real sport.

The title carries on a very nice concept and absolutely in line with those that are the values of Mazda MX5 and in particular: the taste of freedom, the pleasure of contact with nature and an irrepressible "desire for an endless summer".

And just as the two Brown movie’s protagonists are always in pursuit of the perfect wave, so the MX-5 owners chase instead the "perfect path".

The model realized is called MX-5 Levanto: the name is that of small country, called the pearl of the Ligurian coast,  which is considered -- for the unique characteristics of the seabed of its crystal clear sea -- the Italian surfing birthplace.

The livery of the roadster has been created by developing the concept of 'endless summer” and revisited finding inspiration in Levanto, crossing the legendary aesthetic of the Californian beach boy with the sophisticated elegance typical of the Italian Riviera.

The body incorporates the colors of the long summer sunsets (an endless sunset!). With a bright orange tone that fades in indigo height of the waistline. The special coating has been produced with skilled craftsmanship by Garage Italia Customs able artisans that, carefully measuring out the amount of splash from the paint gun, managed to get a perfect fusion, without any kind of separation between the two colors, which fade into each other naturally. The interior holds the chromatic duality of the exterior with a full dashboard trim, door panels and in Japanese denim upholstery, combined with Alcantara nautical blue for the seats (a material that you can safely bathe, therefore perfectly in line with the concept of car) with orange contrast stitching: so young and practical as they are elegant and absolutely new materials in the Automotive field.

To complete the customization of the car, we find a set of 17 "wheels, Diamond Cut," Design 66" of the original Mazda accessories line.

These circles, the characteristic diamond cut, not only give more attractive appearance to the car but, with their identification code ("66") give another, subliminal reference to Brown's film.

The famous film in fact, destined to enter into the myth, saw its worldwide launch in 1966.

Another tribute, another again, by a myth of the 4 wheels to a myth of 35 mm.

And 50 years after the release of the movie, in this 2016, the evergreen Mazda will grant endless summer.

Mazda and  Garage Italia Customs want to thank Levanto Municipality, whose sunsets have made possible the realization of the wonderful pictures, having as protagonist the MX-5 Levanto.