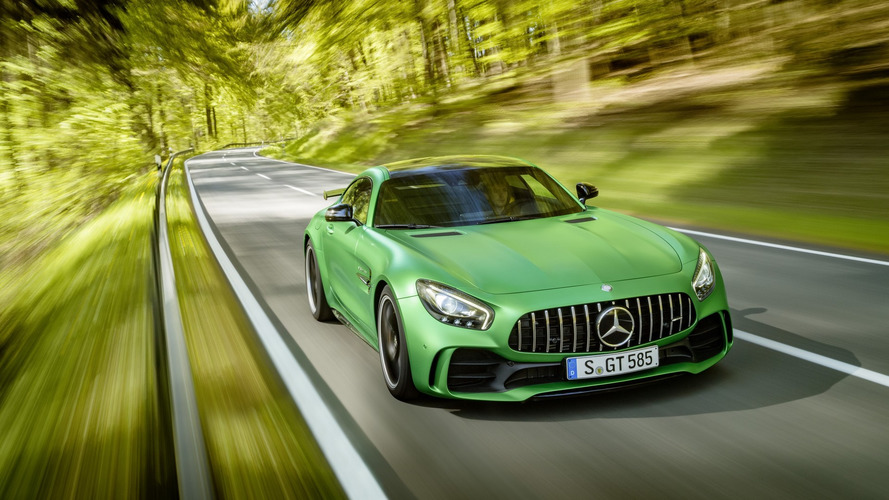 The third and most hardcore member of the AMG GT family adds power and cuts weight for superior performances.

After an extensive teaser campaign, the Mercedes-AMG GT R is finally here and dare we say it was well worth the wait. The skilled engineers from Affalterbach have managed to remove some of the fat while squeezing more power from the biturbo 4.0-liter V8 engine to make the R version worthy of its flagship status.

All that power continues to be delivered to the rear axle through a dual-clutch, seven-speed sports transmission, but it has been optimized for the new R version. The first gear now has a longer ratio, while the seventh gear has a shorter one to enable better acceleration.

With more power wrapped in a lighter package, the R version is capable of running the sprint to 60 mph (96 kph) in three and a half seconds, thus being 0.2 seconds quicker than the aforementioned S version. Aside from providing superior acceleration, the R also has a slightly higher top speed which has increased by 6 mph to 198 mph (318 kph).

Wearing a special “AMG green hell magno” paint exclusive to this version, Mercedes-AMG’s take on the “GT R” moniker can be visually distinguished by its more aggressive body featuring an AMG Panamericana grille derived from the GT3 race car. The carbon fenders have added 1.8 inches of width, while the enlarged air intakes boost cooling to match the upgraded engine. Other tweaks include a wider front splitter which diminishes lift at the front axle along with a big wing at the back providing increased downforce on the rear axle.

There’s more to the visual changes than meets the eye, as the underbody has been completely revised and benefits from active aerodynamics. Mercedes-AMG has fitted a 4.4-lbs carbon component underneath the front of the car which automatically moves downward by around 1.6 inches to improve airflow when the car is doing 50 mph (80 kph) in RACE mode.

It has received a new exhaust system which aims to deliver a race car soundtrack and is about 13 lbs (5.9 kg) lighter than the one fitted to the S version. Another important upgrade is the implementation of rear-wheel steering which is making its debut on a Mercedes-AMG model and enables the GT R to be more agile while cornering. It does that by turning the wheel in the opposite direction to the front ones at speeds of up to 62 mph (100 kph) while above this speed the rear wheels will turn in the same direction as the front ones to improve both handling and stability.

It's going to ride on 19-inch front and 20-inch forged wheels shod in Michelin Pilot Sport Cup 2 measuring 275/35 ZR 19 at the front and 325/30 ZR 20 at the rear. These street-legal tires are ideal for the track and according to Mercedes-AMG should provide 50 percent more mileage on the circuit before needing a replacement.

The Mercedes-AMG GT R will come as standard with an electronically-controlled limited-slip differential on the rear axle and will also take advantage of a variable steering ratio based on the car’s speed. It’s also getting an upgraded carbon-fiber torque tube now tipping the scales at just 30.6 lbs (13.8 kg), making it around 40 percent lighter than before. If you want to slash even more weight, an optional ceramic composite braking system will be available at an additional cost and will cut a further 37 lbs (16.7 kg).

Stepping inside the cabin, the new R is fitted as standard with AMG performance seats dressed in Nappa leather and DINAMICA microfiber, while optionally you can go for yellow seatbelts. Other tweaks available for the R include yellow highlights for the instrument cluster dials, along with a piano black lacquer trim and special controls, which includes traction control buttons with nine selectable settings.

Debuting today at the Goodwood Festival of Speed, the 2018 Mercedes-AMG GT R will arrive in United States by mid-2017. Details about pricing are not available at this point, but all of these upgrades will obviously command a serious premium over the GT S which for the 2017MY in U.S. begins at $131,200.