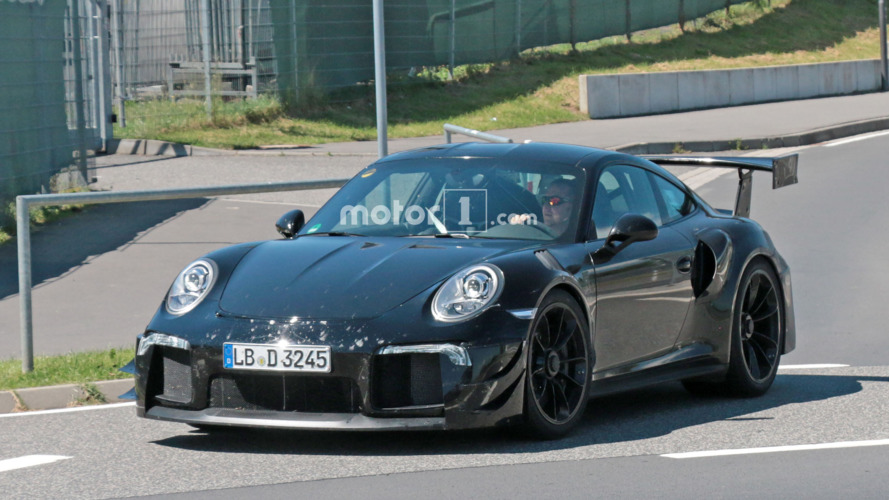 With as much as 700 horsepower, the turbos need to suck in as much air as possible.

The Porsche 911 GT2 RS is now testing at the Nürburgring, and the turbocharged terror wears a much more aggressive body than in the previous batch of spy photos from evaluations in the arctic.

This test mule has most of a GT3 RS body, but additional parts should keep the high-performance biturbo engine running cool. The massive intakes in the front bumper don’t make for a beautiful design, but the large openings suggest the need for lots of airflow. The canards on the corners and downward sweeping LED strips are neat touches, though. The bulbous extensions for the side intakes should help gulp even more air, too. At the rear, extra holes in the bumper would help release the heat, and Porsche spaces out the exhausts more than on the GT3.

There are no drivetrain details yet, but rumors suggest a figure around 700 horsepower driving the rear wheels. The figure seems reasonable given that the current 911 Turbo S has 580 hp and last GT2 RS made 620 hp.

Porsche plans to launch the GT2 RS to cap off the 991 generation, and that means we should see it around 2018. Before then, the GT3 will receive a facelift to look more like the refreshed 911 lineup. Don’t worry, though, because the company will keep it naturally aspirated. We’ll possibly even see a limited run of even higher spec GT3s in the next few years.