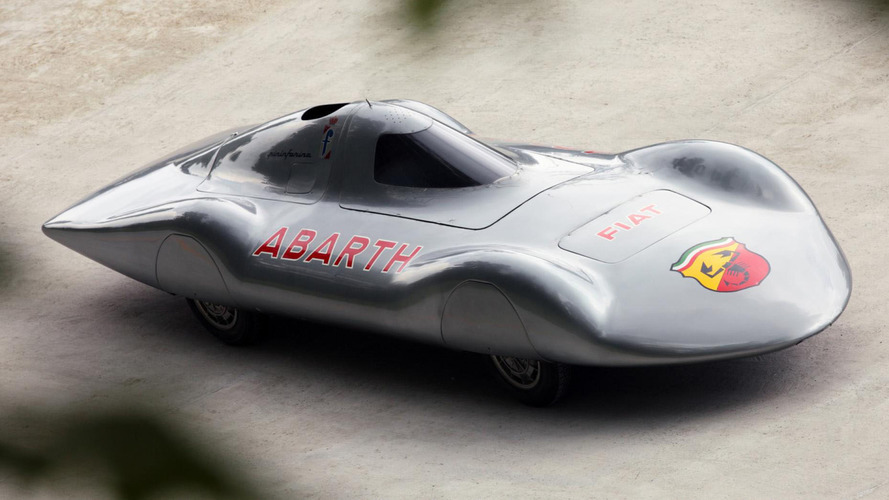 Monterey Car Week, which centers around the Pebble Beach Concours d’Elegance, is home to the premiere vehicle auctions in the world over the course of just a few days. Gooding & Company will hope to gather the wealthy crowds there by headlining its sale with this exquisite Abarth 1000 Bialbero.

Dubbed La Principessa, Italian for "the princess," this beautiful gal made her debut at the 1960 Turin Motor Show, but she made her biggest impact on the track. Pininfarina built this curvaceous woman for Fiat-Abarth to set speed records, and the famous designer used the wind tunnel Turin Polytechnic University to hone the shape. The result was a drag coefficient of just 0.20. Using a 1.0-liter four-cylinder with 100 horsepower the Abarth 1000 Bialbero set nine world records, including driving 72 hours at an average speed of 116 miles per hour and averaging 118.7 mph over 10,000 kilometers. For reference, a Tesla Model S has a Cd of 0.24.

Gooding & Co’s sale will be the first time La Principessa will appear in a public auction. The car will come unrestored and will include documentation proving its racing history. Gooding says the estimated price is available only upon request, but Top Gear claims the figure is over 1,000,000 pounds ($1.47 million). Given the racer's rarity and beauty, the bidding could go even higher, though.

Early highlights Include the 1954 Aston Martin DB2/4 Spider, the 1946 Cisitalia 202 CMM, the 1960 Abarth 1000 Bialbero Record Car “La Principessa,” and More
Auctions will be held at the Pebble Beach Equestrian Center this August

“These automotive treasures represent coachbuilding at their finest from renowned European designers such as Vignale, Pinin Farina and Bertone,” says David Gooding, President and Founder of Gooding & Company. “We feel privileged to offer this unique opportunity for our clients to own a historic piece of automobile design from an era of exceptional Italian craftsmanship.”

(Estimate: $3,000,000-$4,000,000)
The Bertone-bodied Aston Martin DB2/4 Spider represents one of the most fascinating chapters in the British marque’s history and was born out of American enthusiasm. The story behind this coachbuilt beauty begins with the owner of one the largest American distributors of European cars, S.H. “Wacky” Arnolt, who had a strong creative pursuit to deliver to the United States special-bodied cars built on British chassis. While Arnolt ordered various British chassis for Bertone to body, he was truly drawn to the prestigious Aston Martin DB2/4. The DB2/4’s sporting chassis was an ideal working platform for Bertone’s vision for these cars. Six chassis (LML/502-LML507) were shipped to Italy for bodywork and only three were produced in this distinctive Spider style by Bertone. The 1954 Aston Martin DB2/4 Spider presented here, chassis LML/505, is the sole “Deluxe Competition Model” Spider and featured elegant chrome trim, a full windscreen and luxurious interior appointments. It was the 1954 New York Auto Show car that was purposely built to impress none other than David Brown himself. This Aston Martin comes from a prominent car collection, has been meticulously restored, very well documented and is a perfect candidate for any concours or rally event.

(Estimate: $2,000,000-$3,000,000)
The Cisitalia 202 CMM (Coupe Mille Miglia) is one of the most striking examples of streamlined coachwork and a testament to the brilliant collaboration between engineer Dante Giacosa, designer Giovanni Savonuzzi, and coachbuilder Alfredo Vignale. Based on the Cisitalia’s successful 202 model – which featured an advanced chassis and modified Fiat 1100 mechanicals – the CMM was purpose built for endurance racing, with the first example unveiled at the 1947 racing season. This car, chassis CMM-002, was built for the 1948 Mille Miglia, where it was entered by the factory team and driven by the legendary Piero Tarrufi and Domenico Rabbia. After many years in a Japanese collection, this spectacular Italian sports racing car is being presented at public auction for the first time. Rarely seen in public, this fascinating car is an ideal event entry for both rallies and concours.

(Estimate Available Upon Request)
Presented at the 42nd Turin Motor Show, the 1960 Abarth 1000 Bialbero Record Car “La Principessa” is one of the most remarkable designs ever conceived by Italian coachbuilder Carrozzeria Pinin Farina. Built on behalf of Fiat-Abarth, the shape was developed utilizing the wind tunnel at Turin Polytechnic University, with the sole goal being to create a car that would break the world record for highest sustained speed over the longest period of time. Pinin Farina’s masterful hand achieved just that and more. With a drag coefficient of just 0.20, La Principessa went on to set nine world records including 10,000 kilometers with an average speed of 118.7mph, as well as 72 continuous hours at an average speed of 116mph. This unrestored car has been with the same private owner for decades and is being offered for public sale for the first time. Gooding & Company is thrilled to present this rare time capsule, which comes with a wonderfully documented racing history and provenance.