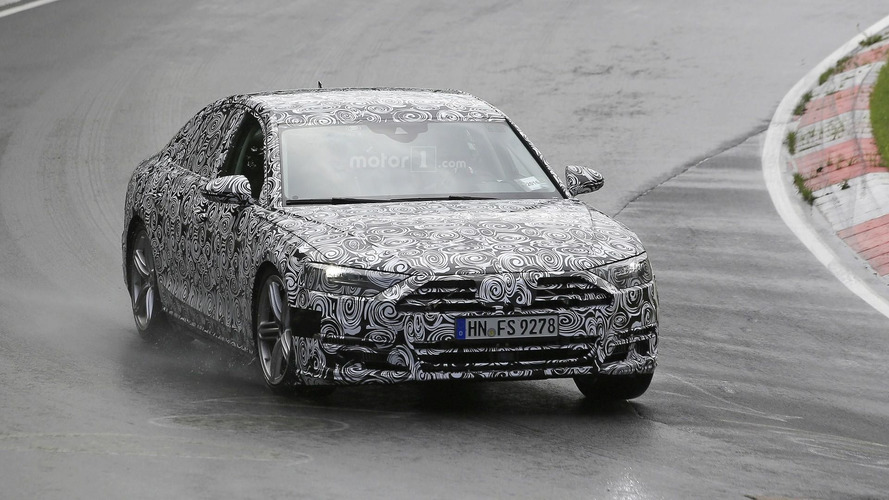 The very best Ingolstadt has to offer in terms of luxury and comfort is getting ready for a new generation.

With the VW Phaeton axed a few months ago, the Audi A8 (D4) is now one of the oldest fullsize luxury sedans out there, along with the Lexus LS which has actually been around the block for even longer. The company with the four-ring logo was spotted once again testing its next crown jewel, the all-new A8 (D5).

A fully camouflaged prototype carrying the production body was caught on camera just a few days ago on a damp Nurburgring while conducting a series of tests. With the prototype sitting so low, most likely Audi’s engineers were tweaking the suspension of the new flagship. It’s unclear whether the prototype had the standard wheelbase or it was the stretched version, but at least we can notice the Prologue concept design influences combined with an evolution of the D4’s styling. Unsurprisingly, Audi is playing it safe in terms of design.

Confirmed for a 2017 launch, the next A8 will ride on the group’s MLB Evo platform and will shed some weight thanks to the new underpinnings. We already know the biturbo 6.0-liter W12 engine will be offered and will likely have the same 600 horsepower (447 kilowatts) and 664 pound-feet (900 newton meters) output as in the Bentley Bentayga.

The next-gen Audi A8 will be a technological tour de force and it will be offered with an optional traffic-jam pilot system which will enable the posh sedan to drive itself at up to 37 mph (60 kph) on highways. It’s also getting the Virtual Cockpit seen in recent Audi models and we are willing to bet the fully digital instrument cluster will be standard. An updated MMI infotainment system with an OLED screen and support for gesture controls is likely on the agenda as well.

With the Volkswagen Group shifting focus towards electrified models, it would make sense for the new Audi A8 to spawn a hybrid/plug-in hybrid version upon launch or later during its life cycle. We won’t be too surprised if there’s going to be a pure electric version at one point taking into account the second-gen Phaeton will be offered in an EV flavor.

Audi is expected to introduce the overhauled A8 either in March at the 2017 Geneva Motor Show or in September the same year in Frankfurt.

Gallery: 2018 Audi A8 spy photos from the Nurburgring