IIHS says you're secure in this little crossover.

Automakers are looking for any way to get ahead of the competition in the popular compact crossover segment in the United States, and Mazda can now market its 2016 CX-3 to families as earning a Top Safety Pick+ award from the Insurance Institute for Highway Safety. The agency rated the little CUV with its top Good score in all five evaluations and gave its optional front crash prevention system a Superior rating – the group's highest grade.

According to IIHS, the driver's survival space maintained its shape well in the difficult small-overlap front crash test. The airbags also did their job of keeping the dummy's head from striking any hard surfaces. The agency found a low risk of injuries to the legs and feet.

The CX-3's crash prevention system successfully avoided a collision at 12 miles per hour. It didn't completely evade an accident from 25 mph, but the tech was able to cut the vehicle's speed by an average of 23 mph. Those results were still strong enough for the Superior score.

The CX-3 went on sale in the U.S. in mid-2015 for a starting price of $20,840 after destination. The sole powertrain option is a 2.0-liter four-cylinder with 146 horsepower and 146 pound-feet of torque. A six-speed automatic drives the front wheels as standard, but there's an optional all-wheel-drive system. 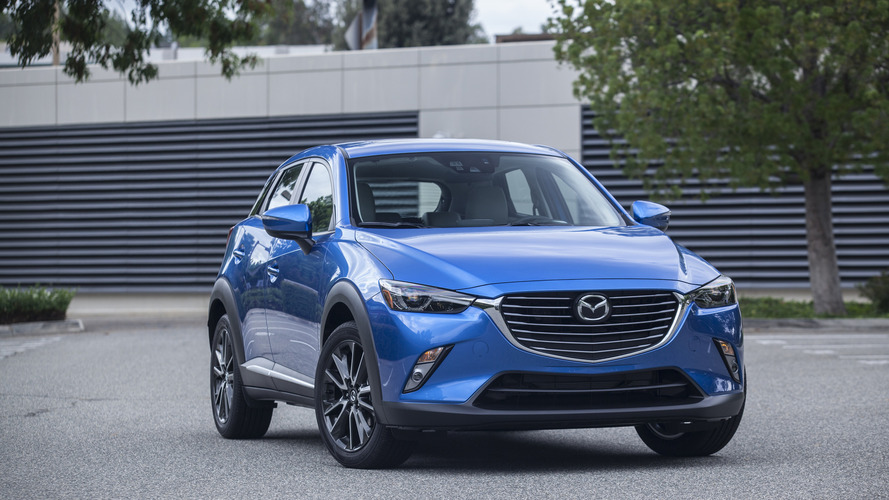 ARLINGTON, Va. — The Mazda CX-3, a new small SUV, earns the highest award from the Insurance Institute for Highway Safety, thanks to good crashworthiness ratings across the board and an optional front crash prevention system with a superior rating.

The SUV’s optional front crash prevention system earns a superior rating. In IIHS track tests at 12 mph, the vehicle avoided a collision. In tests at 25 mph, the impact speed was cut by an average of 23 mph.

To qualify for TOP SAFETY PICK+, a vehicle must earn good ratings in all five crashworthiness tests and have an available front crash prevention system that earns an advanced or superior rating.

For more information, go to iihs.org

The Insurance Institute for Highway Safety is an independent, nonprofit scientific and educational organization dedicated to reducing the losses — deaths, injuries and property damage — from crashes on the nation's roads. The Institute is wholly supported by auto insurers.