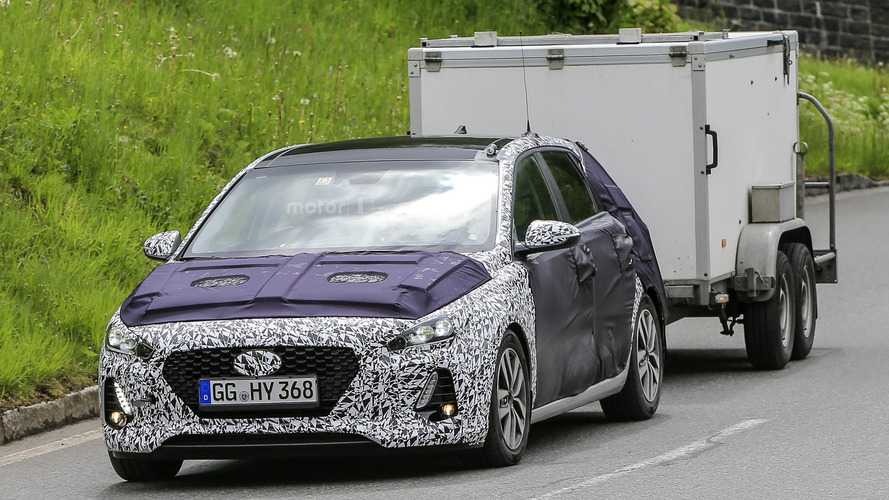 On sale since late 2011, the second iteration of the i30 is now one of the oldest models in Hyundai’s lineup which is why the compact hatchback is getting ready to embrace a third generation. Seen here is a prototype towing a trailer in the Alps and by the looks of it the car had the production body.

Despite the extensive amount of camo, it already seems to be more upmarket than the current model thanks to the Genesis-derived front grille. With more and more non-premium compact models getting full LED headlights, chances are the all-new i30 will also have them as optional equipment. Even cars from a class below such as the facelifted Renault Clio offer LED headlights, so there are reasons enough to believe the 2017 i30 will make the switch from xenon to light-emitting diodes.

As far as proportions are concerned, the prototype doesn’t seem to be bigger than today’s model, but then again we don’t have super vision to notice what could be a very minor stretch. The trend nowadays is to make the new model bigger than its predecessor, so don’t be too surprised if the all-new i30 will have a longer wheelbase to enable a more spacious cabin with extra room for rear passengers.

In terms of engines, the naturally-aspirated gasoline units will probably be retired to make room for an all-turbo lineup. A 1.0-liter three-cylinder is expected to kick off the lineup in 100, 120 hp flavors and there’s also going to be a 1.6-liter from the current i30. On the diesel side we’re likely going to see the same 1.4 and 1.6 CRDi units, but maybe Hyundai’s engineers will tweak these to deliver more power and improved efficiency.

The crown jewel of the i30 range is going to be the “N” version since Hyundai announced recently the i30 N will be out next year. That means the first fully-fledged N model will likely be based on the third-gen i30 and we know for sure it will use a turbocharged 2.0-liter, four-cylinder gasoline engine. Albert Biermann, Hyundai’s Head of Vehicle Test & High Performance Development, hinted a while back the hot hatch will be able to max out at around 155 mph (250 kph).

While exact details about the engine’s output are not available at this point, there was a video a while back suggesting the new unit will deliver somewhere in the region of 263.9 PS (260 hp / 194 kW) at 6,000 rpm and 308.9 Nm (228.09 lb-ft) of torque. Those numbers weren’t final, but at least we can get an idea about what to expect from Hyundai’s performance hatch. Aside from the beefier engine, the front-wheel-drive i30 N will also get bigger brakes, upgraded exhaust, an electronically-adjustable limited-slip differential, and other goodies.

The i30 N will go up against segment rivals such as the VW Golf GTI and the Ford Focus ST and will be “affordable,” according to Biermann.

With the N version due next year, perhaps Hyundai will introduce the regular i30 in October at the 2016 Paris Motor Show.

Gallery: 2017 Hyundai i30 spy photos from the Alps