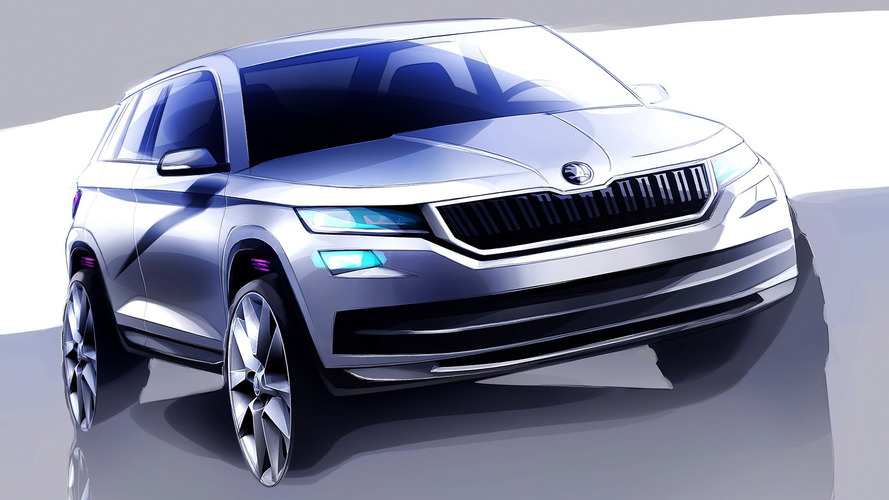 As you would expect from a Skoda, the Kodiaq will have the biggest trunk in its class.

Previewed earlier this year in Geneva by the VisionS concept, Skoda’s first ever seven-seat SUV is almost here. The VW-owned Czech brand has published today a couple of teaser images of the Kodiaq to generate more buzz until the model’s reveal scheduled for September.

If history has taught us anything, it’s that official sketches released by automakers usually show designs which are more exciting than the actual car. That means Skoda’s three-row SUV is unlikely to look as sleek as these sketches depict, but if the VisionS concept is any indication, the Kodiaq will have a bold appearance with a sculpted body making it look both robust and sporty.

Being a Skoda, it should not come as a surprise the Kodiaq will have the largest trunk in its segment. The high-riding model will be sold as standard with a five-seat interior layout and at an additional cost an optional (and foldable) third row will be available for larger families. Positioned above the aging yet still funky Yeti, the new big SUV from Skoda will be around 4.7 meters (185 inches) long, so it will be substantially bigger than sister models SEAT Ateca and VW Tiguan. However, the latter is set to spawn a seven-seat version which will obviously be bigger than the standard five-seat-only model.

Official details about the engine lineup are not available, although you can imagine it will have just about the same assortment of units as its Spanish and German siblings. That means there will be a wide variety of three- and four-cylinder gasoline and diesel engines, all of which will be of course turbocharged. Front-wheel drive is going to be standard on the lesser engines whereas the beefier ones will get an optional AWD layout.

Following its reveal in September, the Skoda Kodiaq will be publicly introduced at the Paris Motor Show in October and will likely go on sale towards the end of the year.