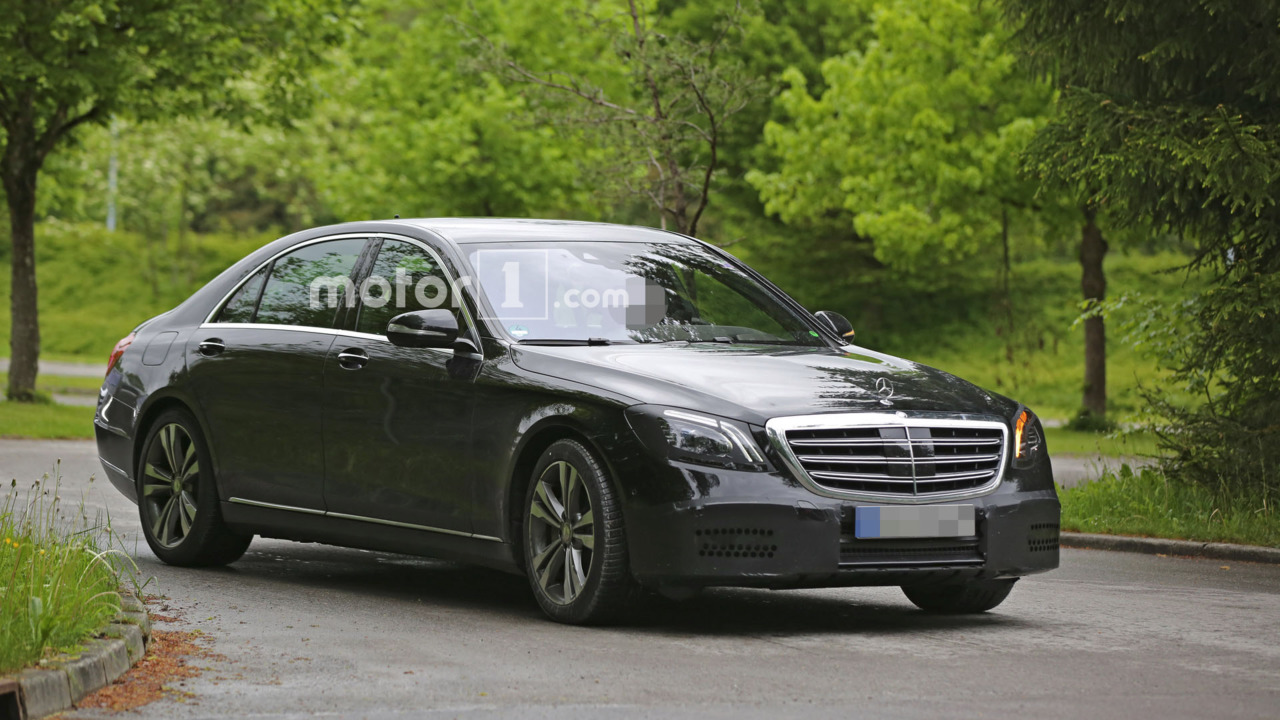 Fuel economy could increase as much as 15 percent.

Mercedes-Benz will invest $7.8 billion over the next two years to become a greener automaker, and some of that cash will go toward implementing a 48-volt onboard power supply in future vehicles. The additional voltage will let the company power more efficient electric powertrain components, and it will create easy path toward giving future Mercedes' mild hybrids, according to Car and Driver. The tech will appear first in the company’s new M256 inline-six engine in the refreshed S-Class (spied above), but it will slowly proliferate through the lineup.

The increased voltage compared to a current 12-volt setup allows Mercedes to install an integrated starter generator (ISG) on the new engine. This specialized electric motor replaces a traditional alternator and starter, and it can provide mild hybrid assistance by taking advantage of regenerative braking, too. The 48-volt system and ISG also allow for quicker engine starts. Because the powerplant can fire up almost instantaneously, the stop-start system can shut off the mill practically anytime the vehicle is coasting. According to Car and Driver, ISG could cut fuel economy by as much as 15 percent.

Switching to a 48-volt power supply is just a tiny part of Mercedes electrification push. Another step will come in 2017 when a refreshed S-Class plug-in hybrid will get a higher capacity lithium-ion battery and an optional inductive charging system. According to a rumor, the German luxury brand will make an even bigger move at this year's Paris Motor Show by unveiling a fully electric crossover that will challenge the Tesla Model X. The CUV will possibly go on sale in 2019.

Source: Mercedes-Benz via Car and Driver

Mercedes-Benz attaches key importance to the optimisation of modern internal combustion engines in its road map to sustainable mobility. In particular, the economical, clean and, especially in Europe, highly popular diesel engine makes an important contribution to the further reduction of fleet consumption. A new family of petrol engines that again will set efficiency standards is set to follow in 2017. The 48-volt on-board power supply will be introduced at the same time. It will make fuel savings possible that previously were the exclusive domain of the high-voltage hybrid technology. Integrated starter generators (ISG) and belt-driven starter generators (RSG) are further components in enhancing the efficiency of internal combustion engines. And what has long since been a must for diesel engines will soon also be used for petrol engines: the particulate filter.

Mercedes-Benz is on the right track. In the two decades since 1995, the average consumption of the passenger car fleet has dropped by nearly half from 9.2 l/100 km (230 g CO2 /km) to 5.0 l (123 g CO2/km). Today, 62 models from Mercedes-Benz Cars already emit less than 120 g/km. And 104 models carry the efficiency label A+ or A. With 88 models, diesel-powered vehicles account for a disproportionately large number of these efficiency champions.

The new family of premium diesel engines from Mercedes-Benz is therefore a powertrain of the future. Following the début of the OM 654 in the E 220 d in spring of 2016, the family of engines will be widely used in the entire product range of Mercedes-Benz Cars and Vans in the medium term. There are plans for several output variants as well as longitudinal and transverse installation in vehicles with front-, rear- and all-wheel drive.

Modular design, reduction in variants and standardisation of the interfaces between powertrain unit and vehicle – this strategy was therefore logically also applied in the development of the new petrol engines from Mercedes-Benz, which complete the family of premium engines. The first representative, an in-line six-cylinder engine (M 256) with integrated starter generator (ISG), will be launched in 2017 and will set new benchmarks in efficiency. The new family will also include a four-cylinder engine with belt-driven starter generator (RSG) starting in 2017.

The belt-driven starter generator (RSG) is coupled with the internal combustion engine like the alternator is today. The combination of starter motor and generator assists the internal combustion engine when starting, accelerating and recovering energy. It uses existing alternator mounts and thus does not impact the design of the powertrain. The conversion to a 48-volt system is also relatively easy to realise on existing platforms with RSG.

The integrated starter generator (ISG) combines the starter motor and the generator in one powerful electric motor that is installed between engine and transmission and is also used for cold starts. It replaces both the existing alternator and the starter motor. The integrated electric motor assists the internal combustion engine, for example when accelerating, and supplies the battery with power by means of high-efficiency energy recovery. Especially in combination with a 48-volt battery, the necessary adaptations of the powertrain architecture pay long-term dividends in the form of higher fuel savings.

The introduction of the new engine generation once more blurs the lines between petrol and hybrid models. Perspectively, all Mercedes-Benz passenger cars will be electrified, because the company is at the same time systematically advancing the development of the 48-volt on-board power supply. The technology will be introduced in various model series step by step. The 48-volt on-board power supply offers four times the power of its 12-volt predecessor at unchanged currents, but without the additional safety architecture of a high-voltage system. Furthermore, this low-voltage system makes fuel savings possible that previously were the exclusive domain of the high-voltage hybrid technology. That is because the important hybrid functions "energy recovery", "boost" and "starting off and manoeuvring in electric mode" can be realised for the first time without high-voltage components. In addition, the durability of such a starter concept is so good that the engine can be switched off much more often and thus any time it is not needed: when coasting to a stop or when sailing, a fuel-saving rolling at higher speeds, as soon as the driver lifts off the accelerator.

The integration of a 48-volt on-board power supply also offers advantages for electrical consumers in the vehicle such as the climate control system, electric heating elements or the extractor fan. At identical power, the electric currents are only one fourth of those in conventional systems. This means that the wiring can have a thinner and thus lighter design – which indirectly contributes to saving fuel.

Particulate filter for petrol models: series-production use at Mercedes-Benz in 2017

What has become the standard for diesel engines will also soon be used for petrol engines at Mercedes-Benz: the particulate filter. Mercedes-Benz is the first manufacturer planning the large-scale use of particulate filters also for petrol engines to further improve the environmental compatibility. After more than two years of positive field experience in the S 500, additional variants of the S-Class powered by a petrol engine are to be equipped with this new technology as part of the model update as early as next year. The filter will then be gradually introduced in other, new vehicle models, model updates and new engine generations. Thereafter, the use of the particulate filter is also planned for the current model series.