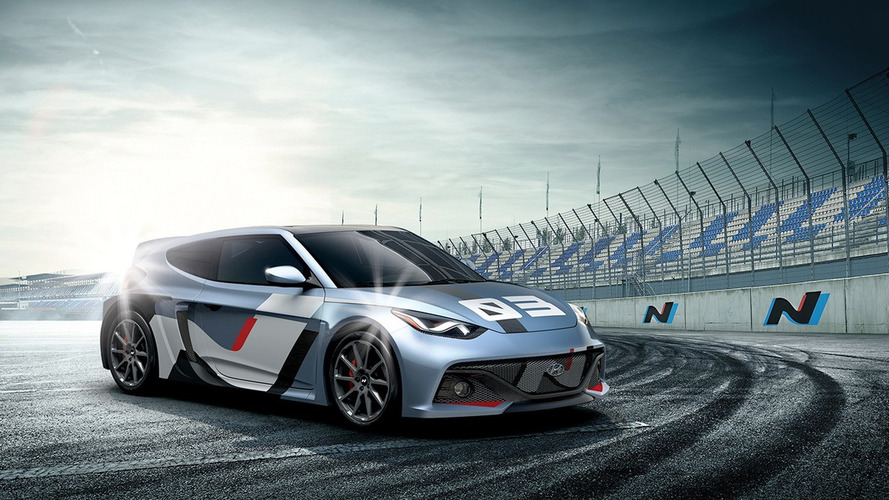 After 2014’s RM14 and last year’s RM15 concepts, Hyundai has taken the wraps off the RM16 at the ongoing 2016 Busan Motor Show. The third concept has also received the “N” suffix to reflect it’s the work of the company’s namesake division in charge of performance cars. Not a lot has changed compared to the previous concepts, but Hyundai has given the RM an exterior makeover to bring it more in line with its latest production cars.

Its heart and soul remains the same 2.0-liter, four-cylinder engine that takes advantage of an electric supercharger to deliver a healthy 300 horsepower (220 kW) and 283 pound-feet (383 newton meters) of torque. All that power is channeled to the rear wheels with help from a six-speed manual gearbox, while the weight distribution stands at 43 percent front / 57 percent rear.

Other goodies on the menu include an electronic limited-slip differential, an electronically-variable exhaust system, along with an automatically-controlled rear spoiler to aid aerodynamics under various driving situations.

There’s no word about a production version and it remains to be seen whether these three concepts are a preview of the next-gen Veloster. If that’s going to be the case, it means Hyundai has plans for a substantially different car, making the switch from a front-engined, front-wheel-drive layout to a mid-engined, rear-wheel-drive configuration.

Attached below is a video of Hyundai’s presentation at the 2016 Busan Motor Show. Jump to 53:08 to check out the RM16 N concept.

The main purpose of the Project RM is to develop core high performance technologies while focusing on performance, ultimately resulting in form following function. The RM model has developed with a ‘rolling lab’ concept since 2014, playing a key role in research and development of high performance future ‘N’ models from Hyundai Motor.

Albert Biermann, Head of Hyundai Motor’s Vehicle Test & High-Performance Development said, “RM models will continue to play an important role as the ‘rolling lab’ in the development of our future high-performance ‘N’ cars.”

Like previous RM models, the design of the RM16 is determined by its focus on performance: form follows function with styling optimised for aerodynamics. The aggressive front with low-extended hood, slim headlamps and wide air intakes sets the tone of its low and wide image, created to accommodate high performance technologies.

The latest concept inherits characteristics from the earlier RM14 and RM15 models – in particular the RM14’s six-speed manual transmission and mid-ship mounted 2.0L theta T-GDI engine – tuned to develop 220kW. Additionally, the RM16 boasts the same sports-focused weight distribution (43% front, 57% rear), as its predecessors, benefitting from a centre of gravity less than 500mm from the ground.

Over these three RM models, there has been an evolution in aerodynamics that in turn aids stability and thermal flow, maximising the potential offered by improved powertrain performance. New technologies have been applied, including an electric supercharger to enhance engine power and responsiveness; electronic limited slip differential (E-LSD) that distributes optimal power to each wheel when turning; and an automatically controlled rear spoiler to optimise aerodynamics according to different driving conditions.

This instinctive and visceral experience is enhanced by the electronically-variable exhaust system, which provides a powerful tone to match the sense of acceleration, while the adjustable bolster sports seat contribute to the absorbing driving experience by adapting to the driving mode and speed of cornering.