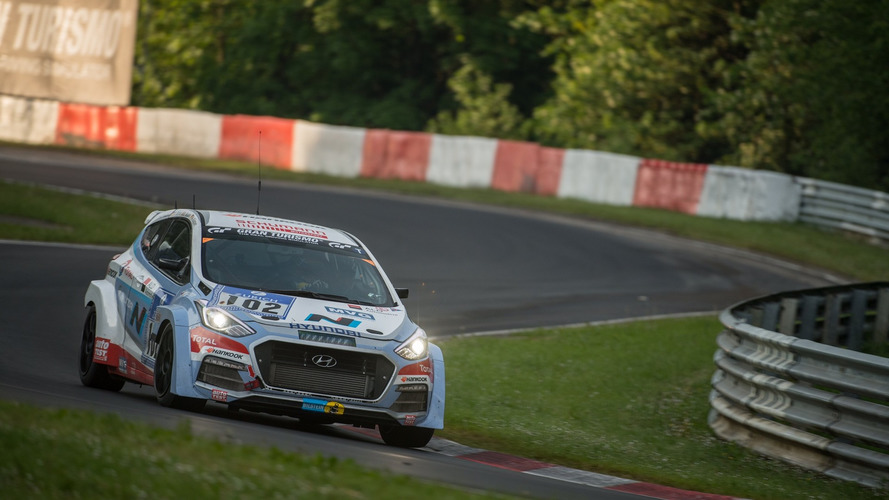 Hyundai has announced the first ever full-blown N model will be launched in 2017.

The first N-badged model came out last August, but with 115 horsepower on tap, that wasn’t exactly something to get excited about. For a true performance car from Hyundai’s N division, you’ll have to wait until next year when the i30 N will see the light of production day. That is the promise made by Albert Biermann, Hyundai’s Head of Vehicle Test & High Performance Development.

It is going to be based on the third-generation i30 and will use a turbocharged 2.0-liter, four-cylinder engine that was tested last weekend in a development car during the grueling Nürburgring 24-hour endurance race. It crossed the finish line on position 90th overall after covering 2,309 kilometers (91 laps) of the track, with a fastest lap time of 9:55.636.

Speaking to Autocar, Biermann hinted the front-wheel-drive 2017 i30 N will be able to hit a top speed of approximately 155 mph (250 kph). The newly developed engine will be linked initially only to a manual gearbox, but an automatic transmission is scheduled to arrive at some point in 2018. Interestingly, Biermann did not exclude the possibility of an all-wheel-drive i30 N as well.

While information regarding an exact power figure is not available at the moment of writing, a video released last week by Hyundai did show something interesting. The turbo-four unit was on a test bench and the computers showed it was generating 263.9 PS (260 hp / 194 kW) at 6,000 rpm and 308.9 Nm (228.09 lb-ft) of torque. These output numbers are not final, but at least we have an idea about what to expect from the production car.

To spice things up, Hyundai will sell the i30 N with an optional track-oriented performance package that will increase the engine’s performance even more. Some of the goodies on the menu that will come as standard include an electronically-adjustable limited-slip differential, upgraded exhaust, optimized gearbox, beefier brakes, and other improvements over the regular i30. Biermann said the N version is going to be “affordable,” so its price is expected to undercut more established hot hatches such as the Ford Focus ST and the VW Golf GTI.

Lastly, Biermann mentioned Hyundai’s premium brand Genesis will also get some spicy versions with help from the N division.

31 May 2016 – Hyundai Motor’s i30 N development car successfully completed its first motor racing appearance in the Nürburgring 24hrs at the legendary Nordschleife. The race, held at the most demanding race circuit on earth, served as an intense test-bed for the new, performance-orientated engine that will be fitted to the brand’s first N model.

“The endurance race at the Nürburgring is the toughest race in the world,” said Albert Biermann, Head of Vehicle Test & High Performance Development. “It’s the perfect environment for testing the resilience of our new turbo-charged two-litre engine under extreme strain.”

The direct-injection turbo-charged engine at the heart of the development vehicle coped with the strains of the 24h Race. This is an important finding for Hyundai Motor and the development of future high-performance engines.

“We are on a very good way regarding the design of our first N vehicle. In the process of designing high-performance engines, the highest possible horsepower output is not the top priority. Instead, the engineers focus on maximum driving pleasure and driving fun without compromising the every-day-usability,” added Mr Biermann.

In addition to the 2.0L turbo development drivetrain, many components of the i30 were adapted for racing at the gruelling Nordschleife; suspension and shock absorbers were enhanced, as well as wheels, steering, fender extensions and safety features required to meet racing regulations.

In addition to the important findings that will be incorporated in the design of future Hyundai engines, the race also proved to be a major success from the motor racing point of view. The i30 N development car outpaced quite a number of the other 159 cars that contested the endurance classic. The development vehicle took the chequered flag after 24 hours in 90th position in the overall rankings. Altogether, drivers Bruno Beulen (BE), Michael Bohrer (DE), Alexander Köppen (DE) and Rory Pentinnen (FI) completed 91 laps of the track, a distance of 2,309.39 kilometres at racing speed, with a fastest lap time of 9:55.636 minutes.

All three Hyundai cars contesting this year’s event managed to complete the 24 hour race, with the Veloster 1.6L Turbo once again finishing first in its class, following on from its 2014 class win. This is the third year in succession Hyundai has finished first in the SP2T class at the legendary Nürburgring 24hrs.