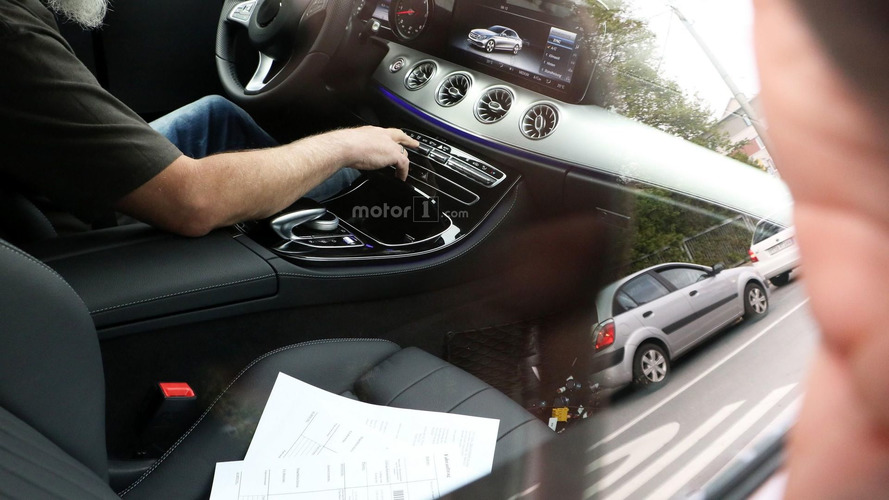 Today we bring a fresh batch of spy images with a prototype of the all-new Mercedes-Benz E-Class Coupe.

There’s not much to talk about in terms of the exterior design as the prototype caught on camera had just about the same amount of disguise as previous cars. After seeing the new C-Class Coupe and the E-Class Sedan, it’s not that hard to imagine what’s hiding underneath that swirly camo, a gorgeous yet predictable design.

Let’s focus on the interior which those with a keen eye for detail will notice is a little bit different than the current crop of Mercedes-Benz models. For starters, those four air vents mounted in the center have a sportier design and dare we say look considerably better than the ones seen in recent cars with the three-pointed star logo. We still find the air vents of the Audi TT the coolest in the business, but these come pretty close.

Another change, although less obvious, is the absence of the analog clock. Instead, Mercedes-Benz has installed the hazard lights button which in the new E-Class Sedan sits to the right of that cluster.

As you can see, the prototype was rocking the analog instrument cluster dials which you can get with the low-end versions of the Sedan. We believe only very few people that will buy the coupe will actually go for the base models, but we know that some folks - including this writer here - still prefer conventional dials.

Expect the new E-Class Coupe to be introduced sometime next year and go on sale as a 2018MY. It will be followed several months later by the E-Class Convertible which we caught on camera a little over a month ago. If you would rather have something more practical, the E-Class Estate is the one you want. The midsize wagon will likely be unveiled in the months to come and go on sale this fall.