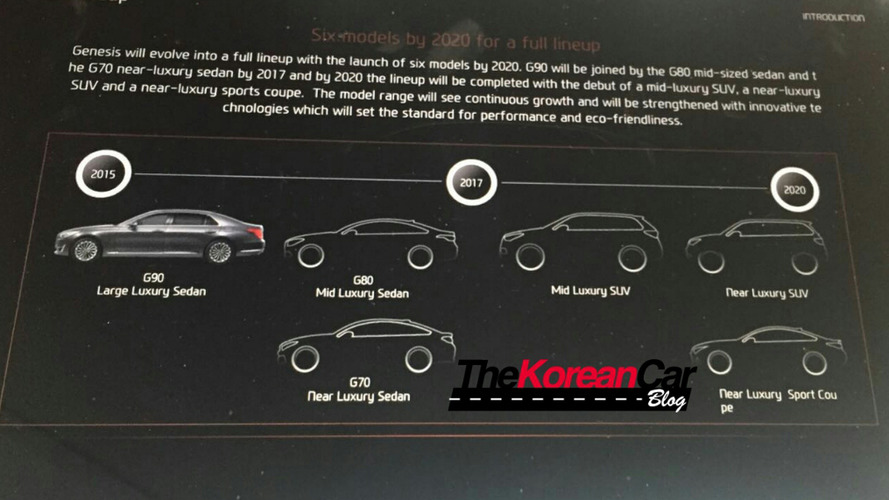 Company plans to introduce an entry-level sedan and coupe as well as two crossovers.

Genesis' future product lineup is coming into focus as The Korean Car Blog has managed to get its hands on the company's roadmap.

As you can see, the company's efforts are already underway as the automaker introduced the range-topping G90 at the North American International Auto Show earlier this year.  The company also used the show to introduce the G80 which is essentially a rebadged version of the Hyundai Genesis.

Bigger changes will occur later this year as the image confirms the company will introduce the entry-level G70 before 2017.  The model was recently previewed by the New York concept and will battle the Audi A4, BMW 3 Series, and Mercedes C-Class. Genesis hasn't said much about the car but the concept featured a hybridized powertrain that consisted of a 2.0-liter four-cylinder engine and an electric motor.  This enabled the model to produce a combined maximum output of 245 horsepower and 260 pound-feet of torque.

Later in the decade, Genesis will introduce two luxury crossovers and a sporty coupe.  The latter model could be based on the G70 but nothing is official as of yet.

Little is known about the crossovers but the image suggests the company will introduce a mid-size crossover around 2018.  It will be followed by a compact crossover a year later.