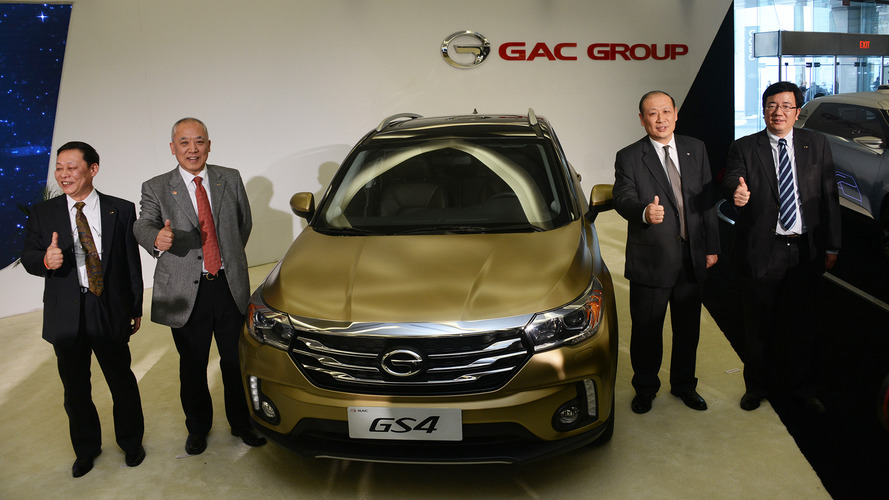 Chinese company already has a partnership with FCA.

Chinese automaker GAC Group plans to show a car at the 2017 Detroit auto show. The company last attended Detroit in January 2015, when it showed off its GS4 crossover that’s now on sale overseas.

GAC has not yet said which vehicle it will display at the upcoming Detroit show, but the company’s announcement suggests GAC plans to eventually start selling cars in the U.S.

“As we look to establish ourselves as a global brand we are optimistic we can gain more momentum following the announcements we will make this coming January in Detroit,” GAC Group vice chairman president Zeng Qinghong said in a statement.

When it was shown in Detroit in 2015, the GAC GS4 crossover was said to have a 1.3-liter turbocharged engine and a spacious interior, surrounded by sheetmetal sculpted with the company’s “Flying Dynamics” styling language.

If GAC does plan a return to the U.S., it’s possible it will leverage its connection with Fiat Chrysler Automobiles. The two companies have a partnership to build the Jeep Cherokee and Renegade in China (under the company name GAC FCA), as well as the Fiat Viaggio, a rebranded Dodge Dart. A report in Italian paper il Giornale also suggests that FCA and GAC may be close to establishing a partnership that goes further than simply manufacturing.

If GAC does begin selling cars in the U.S., it will be the only Chinese automaker to do so. There are, however, two Chinese-built cars currently available in the American market: The new Buick Envision crossover, and the Volvo S60 Inscription.

The North American International Auto Show (NAIAS) announced today that Chinese automaker GAC Group will exhibit on the main show floor at the 2017 auto show. GAC Group returns to Detroit after it participated at the 2015 NAIAS where the company unveiled its GS4 SUV in front of thousands of international journalists.

“GAC Group’s return to NAIAS is very exciting for our show as it underscores the significant coverage and impact automakers receive in markets across the globe when unveiling products at our show,” said Sam Slaughter, 2017 NAIAS Chairman.

The NAIAS team has been in discussion with GAC Group for the past year on their participation at the upcoming NAIAS, and while attending the 2016 Beijing Motor Show, NAIAS Executive Director, Rod Alberts met with Zeng Qinghong, Vice Chairman President, GAC Group. Alberts took the time to review the NAIAS media metrics report with the GAC Group executives that is compiled for the auto show by PRIME Research. As one of the top auto shows globally, NAIAS garners as much international media coverage as the other top three domestic shows combined. The global coverage GAC Motor received at the 2015 NAIAS was one of the key factors the automaker referenced in its interest to coming back to Detroit.

“GAC Motor’s market share in China increased following the world debut of the GS4 two years ago and was a direct result of the international coverage we received,” said Zeng Qinghong, Vice Chairman President, GAC Group. “As we look to establish ourselves as a global brand we are optimistic we can gain more momentum following the announcements we will make this coming January in Detroit.”

In addition to interacting with media, GAC Group expressed great interest in connecting with other leading automakers as well as suppliers that attend NAIAS. This past January, NAIAS set an attendance record for Industry Preview as nearly 40,000 executives, engineers, designers and analysts walked the show floor.

The news of GAC Group’s presence at NAIAS comes on the heels of a very strong 2016 show. NAIAS Executive Director Rod Alberts reported 5,068 journalists from 60 countries attended the two-day Press Preview that has become synonymous with attracting the world’s top automotive leaders. Attending media saw 61 vehicle introductions with nearly 90 percent of them being worldwide reveals.

Just a month ago, NAIAS announced the launch of AutoMobili-D, a dedicated exposition focused on the rapidly evolving global automotive and mobility landscape. AutoMobili-D will feature more than 100 companies, including automakers, tier one suppliers and tech startups, within 120,000 sq. ft. of dynamic display communities in the Cobo Center Atrium overlooking the international waterway and the adjoining Hall E.