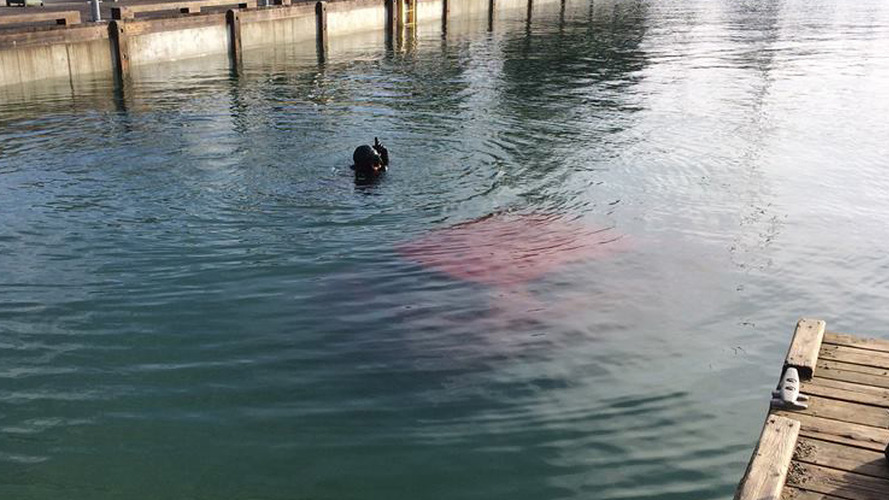 The authorities had divers help haul the car out of the bay.

A woman in Canada met a rapid and quite wet end to her drive during the foggy night of May 12 when she followed navigation directions down a boat ramp and into Little Tub Harbour on Georgian Bay in Tobermory, Ontario. As the photos show, her Toyota Yaris eventually sank.

According to the Toronto Sun, the 23-year-old driver was following her car’s GPS on the rainy, foggy night. The low-visibility conditions meant the woman didn’t realize she had driven onto the boat ramp. After hitting the water, she reacted to the incident quickly enough to roll down the window, grab her purse, and escape the sinking Toyota. The woman then went to a hotel and called the police. She suffered no injuries, and law enforcement said that alcohol wasn’t a factor in the accident.

"How the launch works, it's not an airborne thing. It's not 'Dukes of Hazzard.' It kind of goes off the road and the launch just drops all of a sudden," Constable Katrina Rubinstein-Gilbert told the Toronto Sun. "So she would have been driving on the road, and then all of a sudden just dropped and hit water."

The hatchback remained underwater until the following day when the authorities hauled it away. According to the Toronto Sun, there are no pending charges in the case. The photos below show the submerged Yaris’ retrieval.