2018 Audi A8 spied with production body for the first time 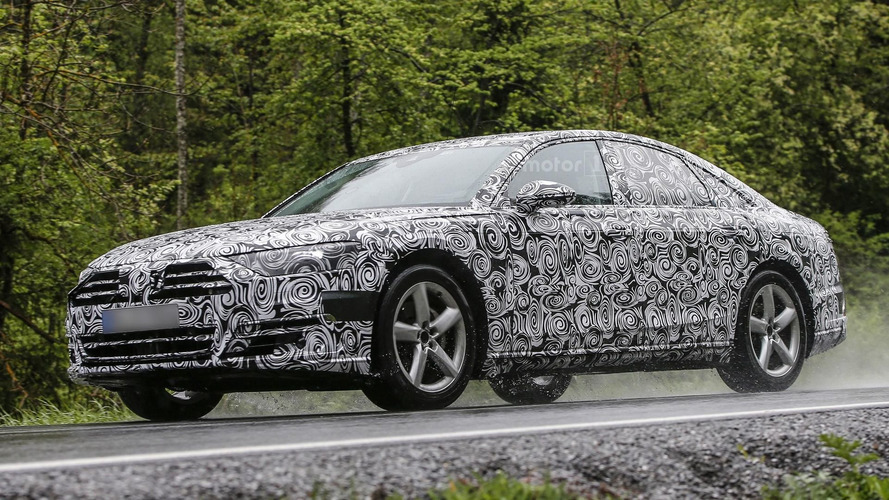 The all-new Audi A8 (D5 generation) has been caught on camera for the first time hiding a production body.

Hot on the heels of yesterday’s announcement about a 2017 launch, the fifth-gen A8 has now been spotted by our spy photographers during an extensive test drive through Austria and southern Germany. Drawing inspiration from the Prologue concept, the 2018 A8 is hiding a significantly different design compared to the outgoing model and it also appears to be slightly longer, but this may be the A8 L. The roofline seems a tad lower to give it a sleeker side profile, and overall the body gives the impression we are dealing with a significantly lighter car.

The heavily camouflaged prototype has a low ride height which means that Audi was most likely testing the car’s suspension. Up front, the fascia is dominated by a hexagonal grille different than the one seen on the A4 and we can also say the same thing about the headlights which have a different shape. The rear end is home to more angular taillights that continue to extend onto the tailgate like on the current car, but the formation has changed.

Photos of the interior are not available in this set, but even so we can tell you already the new A8 will use the fancy Audi Virtual Cockpit since that one is already an optional on the much cheaper A4. On the all-new A8, it will probably come as standard equipment and will be paired with Ingolstadt’s latest and greatest MMI infotainment system likely to feature gesture control support and an OLED screen.

What we do know for sure is that an optional traffic-jam pilot system will enable the flagship Audi to drive itself at speeds of up to 37 mph (60 kph), but only on highways. In addition, we also can tell you the fullsize executive sedan will go through a strict diet that will shave off some serious weight thanks to the MLB Evo platform.

Look for an official debut as early as next March at the 2017 Geneva Motor Show. However, Audi could decide to wait until September for the Frankfurt Motor Show in Germany to host the reveal on its home turf before putting the A8 on sale as a 2018MY.