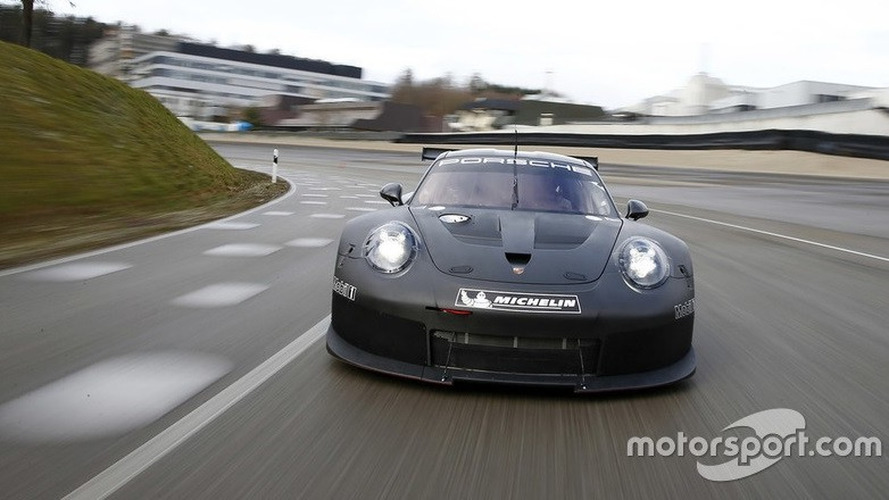 Porsche has revealed the successor to its current 911 RSR GTE machine, which will compete in both the World Endurance Championship and the IMSA WeatherTech SportsCar championship in 2017.

The new 911-based contender was shaken down on the German marque's test track at its Weissach headquarters, and is scheduled to make its race debut in next January's Daytona 24 Hours.

A "majority" of Porsche's current roster of GT drivers attended to turn laps in the new machine, which will undergo an extensive test programme for the rest of the year.

“It is definitely unusual to put several drivers behind the wheel at a rollout,” said Porsche's GT project manager Marco Ujhasi.

“But since all of our works drivers are involved in the development of the new car, the ones who could fit it into their schedules came to Weissach and turned a couple of laps.”

Head of Porsche motorsport Frank-Steffen Walliser added: “The race debut of a completely new vehicle at a 24-hour race is a big challenge. But we are right on schedule."

Porsche currently runs a full factory effort in the GTLM class of the IMSA series, but chose not to contest the full WEC schedule in 2016 as in previous years, with the exception of the 24 Hours of Le Mans.

It is unclear whether it intends to bring back its factory WEC squad on a full-time basis next year, or if it will continue to field works drivers with the Dempsey-Proton squad, as is the case this season.