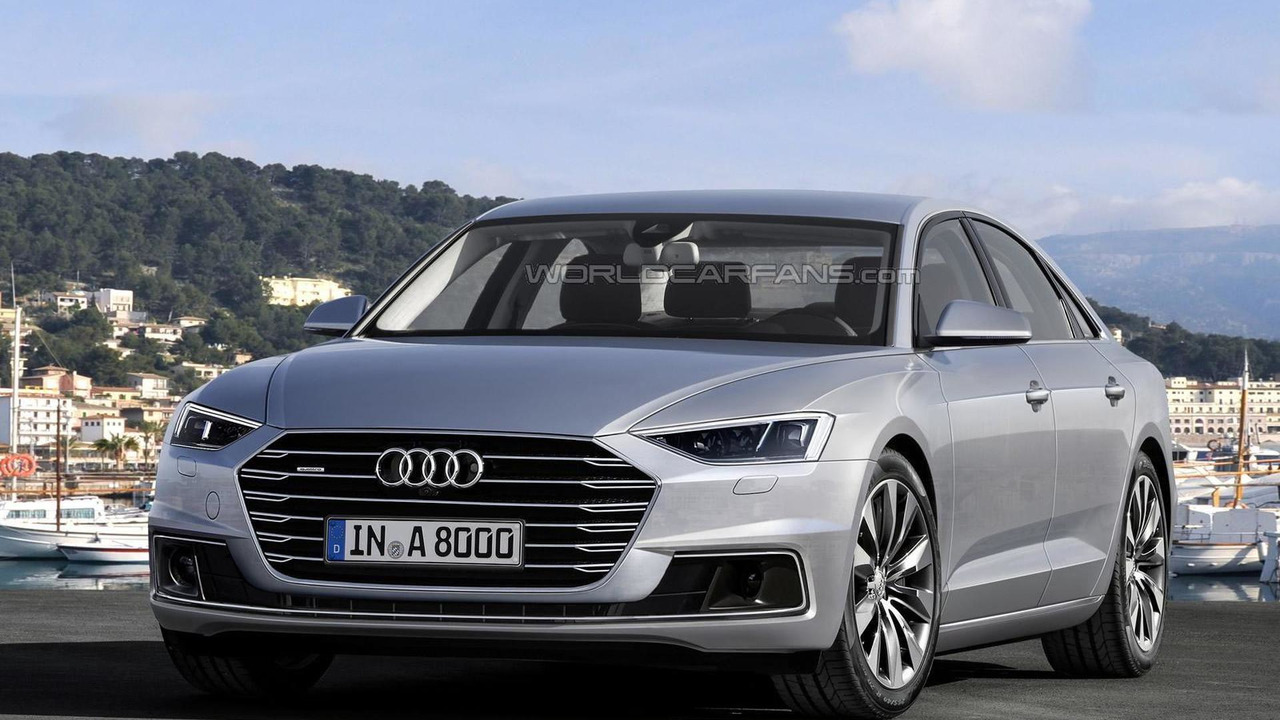 At the annual shareholder meeting held today in Ingolstadt, Audi’s CEO Rupert Stadler announced among other things the all-new A8 will be launched next year.

The third generation of Audi’s flagship model came out seven years ago and while many were expecting for a successor to hit the market this year, that won’t happen. The company with the four-ring logo revealed today plans to introduce the next-gen A8 in 2017 when it will become the company’s “first series-produced car capable of piloted driving.”

Thanks to a newly developed traffic-jam pilot system, the fullsize luxury sedan from Audi is going to drive itself on highways at speeds of up to 37 mph (60 kph). The technology is set to evolve in the years to come and Audi estimates it will have an entirely autonomous car on the road by 2025.

To recap what we know so far about the new A8 (D5 generation), it will be the first production car designed from the ground up by Marc Lichte and his team. That means it will borrow many styling cues from the rather stunning Prologue concept which we used to come up with our own speculative rendering (back in the WCF days) of the 2018 A8.

Set to ride on the MLB Evo platform, the all-new A8 is expected to lose as much as 441 pounds (200 kilograms) which will pay dividends as far as efficiency and performance. One of the engines that we already know will find its way under the hood is the new biturbo 600-hp, 664-lb-ft 6.0-liter W12 that debuted in the Bentley Bentayga which we reviewed just a few days ago.

Some of the tech goodies we are expecting include laser headlights, OLED taillights, e-turbo like in the SQ7, along with the best Audi has to offer in terms of infotainment systems. About that, some say the new A8 will pack OLED screens, gesture control support, and obviously a plethora of safety and assistance systems like you would expect from a flagship.

Audi doesn’t say exactly when the car will be out, but since it has been a long time in the making, it will probably be introduced in the first half of the year. That’s why we should look for an official debut at the Geneva Motor Show in March, with sales to commence a few months later. If not, the A8 will be unveiled in mid-September at the Frankfurt Motor Show and will reach dealerships before the year's end.

Check out the press release below to find out what Rupert Stadler had to say during the 127th Annual General Meeting in Ingolstadt today.

In 2016, the Audi Group aims once again to increase the number of cars delivered, maintain its high level of profitability and continue investing large amounts in the future. At the 127th Annual General Meeting this Thursday in Ingolstadt, the Board of Management of AUDI AG explained to the shareholders the financial statements for the year 2015, current developments and the goals for this year. In addition, Rupert Stadler, Chairman of the Board of Management of AUDI AG, provided an outlook on the coming decade for the premium brand.

“We performed well in financial year 2015 despite all the challenges,” stated Stadler. This can be seen for example from the record number of 1.8 million Audi‑brand cars delivered and the operating profit at the high level of the previous year. Adjusted operating profit amounted to €5.1 billion; including special items, also relating to the diesel issue, it amounted to €4.8 billion.

“We aim for further growth in 2016,” stated Stadler. After the first four months of the year, Audi is well on the way to achieving this goal. In 2016, for the first time more than 600,000 customers decided in favor of an Audi in the period of January through April. The company delivered 620,100 automobiles with the Four Rings in the first four months of this year – 4.9 percent more than in the prior‑year period.

The Audi Group will publish its key financial metrics for the first quarter of the year on June 1. With a view to the full year, Axel Strotbek, Member of the Board of Management for Finance and Organization, stated: “We are currently in a phase of enormous advance expenditure for the mobility of tomorrow.” Nonetheless, Audi once again aims to achieve an operating return on sales within its strategic target corridor of eight to ten percent and a net cash flow of between €2 billion and €2.5 billion.

For the year 2016, the company plans total investment in property, plant and equipment of more than €3 billion, once again to be fully financed from its own resources. “We will gain the required scope for that by optimizing our processes and costs and by consistently prioritizing the important topics for the future with our investment projects,” stated Strotbek.

The key points are a course of systematic innovation and the expansion of the product range. “Our model and technology initiative will ensure our growth of tomorrow,” stated Stadler, “Electrification and digitization represent an historic shift. We will play a large part in shaping this change and will thus further enhance our strong position.” A large proportion of the planned investment will flow into these projects. In addition, Audi will strengthen its team this year, in Germany alone with 1,200 experts in strategic areas for the future.

This year, more than 20 new or upgraded Audi models will be launched, including the Audi Q2*. With this compact City‑SUV, the Ingolstadt‑based company plans to gain new, urban customers for the brand. It will have its own SIM card including an unlimited data plan, and will therefore have an Internet connection as standard equipment. Optionally, mobile devices will be able to go online via a Wi‑Fi hotspot. Furthermore, the SUV offers a wide range of connect services as well as numerous driver‑assistance systems from higher‑range models.

At the top end of the range, Audi is expanding its successful Q family with the sporty SQ7 TDI* and the Q7 e-tron quattro*, the brand’s second plug‑in hybrid. Its standard fuel consumption is less than two liter per 100 kilometers (better than 117 miles per US gallon). The Q7 e-tron can travel up to 56 kilometers in purely electric mode, meaning that most day‑to‑day journeys can be made without causing any local emissions at all.

In addition to its SUV fleet, the company is also expanding the new generation of the A4 family. Since mid‑March, customers have been able to order the Audi A4 allroad quattro*, and orders will be taken for the S4 Sedan* and Avant* as of the middle of this year. Furthermore, the new A4 is gradually being launched in markets outside Europe. In the United States, it has been available since March. In China, it will be in the dealerships in the second half of the year.

Audi is expanding its worldwide production network in 2016 and will put its plant in Mexico into operation. Producing on the American continent means that growth potential there can be utilized even better. High local value added of about two thirds by the start of production will also reduce the effect of currency fluctuations on Audi’s financial performance. The first Audi Q5 cars will drive off the assembly lines in San José Chiapa in the second half of this year.

Furthermore, Audi is currently preparing for production of its first fully electric large‑series automobile. It will be launched in 2018 as a sporty SUV with a range of more than 500 kilometers and will be produced in Brussels. The plant there will also have its own battery production. “Starting in 2018, we will launch another electrified car each year,” announced Stadler.

Audi is working on the megatrend of digitization in all parts of the company. This ranges from the intelligent factory to the connected car and piloted driving and to the development of new areas of business.

An important role will be played here by the digital map service, HERE, which Audi acquired in 2015 together with BMW and Daimler. Highly precise maps linked with real‑time data will be the basis for example for many future digital services, and for piloted driving using swarm intelligence.

In 2017, Audi will present the new A8 – the brand’s first series‑produced car capable of piloted driving. With the traffic‑jam pilot, it will be able to drive itself temporarily on the autobahn at speeds up to 60 kilometers per hour (37 mph). In this way, Audi will cross the threshold from partial to highly automated driving. Stadler is convinced: “By 2025, we will see fully automated driving.”