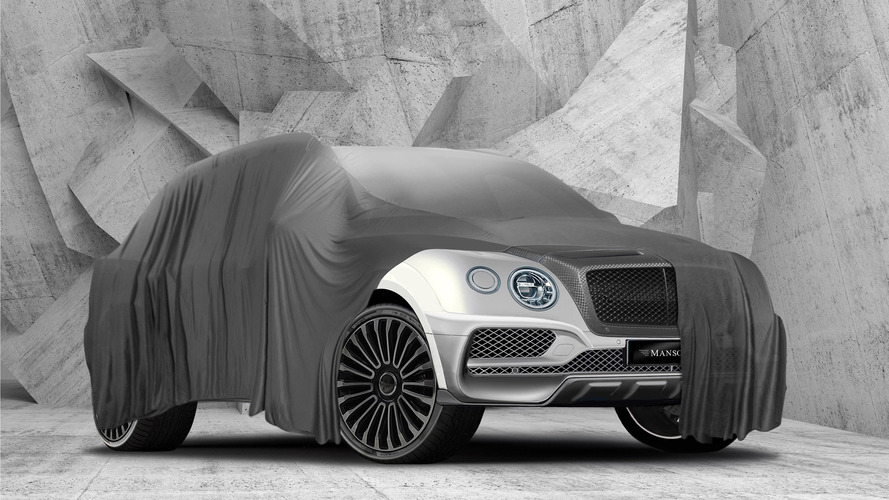 Mansory offers a glimpse at the carbon fiber nose and massive wheels for its tuned Bentley Bentayga.

The high-end tuners at Mansory are now teasing their work on the Bentley Bentayga. The luxurious model is just starting to arrive to customers, but it’s already one of the most opulent crossovers in the world. Mansory pledges to take the well-appointed vehicle even further with lavish upgrades and more performance for the new machine.

Mansory’s single teaser image shows off a few of the exterior changes. The hood and grille now appear to be carbon fiber, and the CUV has massive, multi-spoke 23-inch wheels. We can’t see the interior here, but the firm promises a mix of top-quality leather, Alcantara, wood, and more carbon fiber.

The tuning company also pledges “a substantial increase in performance,” but doesn’t give away any details about how it's doing that work. However, the company needs to make the number huge to stay out of the shadow of the rumored Bentayga Speed. Where the standard model makes an impressive 600 horsepower and 664 pound-feet of torque from its biturbo 6.0-liter W12, the hotter version reportedly could push that figure to 650 hp. The prodigious power might allow the Speed to reach 60 miles per hour in less than 4 seconds and a top speed around 200 miles per hour. We look to seeing whether Mansory's upgrades can match or even better those alleged specs.

MANSORY is known for its comprehensive fine-tuning of premium vehicles soon after they are released on the market. This is why it should come as no surprise that the refining of Bentley’s new luxury SUV, Bentayga, is fully underway: an extensive bodywork programme, XXL light alloy wheels, a substantial increase in performance, as well as the finest interior customisations are just about ready for release.

And as always here at MANSORY, we do not scrimp on using carbon, even if it is concealed under exquisite layers of lacquer, or in full view with its typical woven-like structure - specialists from this Bavarian brand manufacture all their bodywork components from the very light-weight and highly stable carbon fibre material.

The interior space has also not been overlooked by MANSORY and features its own carbon elements for that extra touch. Our proprietary upholstery team joined forces with the design department to come up with a draft for the carbon-based design, which brings the exclusive look of the exterior into the vehicle itself. The team was once again able to show that MANSORY only processes the very best, flawless leather; top quality Alcantara, perfect top notch woods, and of course, carbon that has been precisely manufactured in an autoclave.

Distinctive and light-weight 23” alloy wheels to round of the overall look of the Bentayga: a combination of sporty and luxurious.

It is not just the aesthetics that have been given a touch up by MANSORY - the engine performance has also been re-worked. The first increase in performance was achieved during the trial phase.

There is no other vehicle that is as exclusive and well-equipped as this vehicle, both on and off the road.

You will find more information about the exclusive programme for Bentley Bentayga on the www.mansory.com website.

Premium British cars and their special flair have always been a passion of owner and the man who gave his name to the company - Kourosh Mansory. This enthusiasm resulted in him spending several years in England and also led to a personal commitment to automotive values such as tradition, hand crafting and sophisticated technology. So right from the founding of the company in 1989, special attention was paid to the brands Rolls-Royce, Bentley, and Aston Martin. Nowadays, MANSORY devote the same attention to detail to individualising models from the brands Porsche, Lotus, Maserati, BMW, Mercedes-Benz, McLaren, Lamborghini and Ferrari, and they have established themselves as one of the largest, most highly regarded car individualisation companies in the world.

In the middle of 2001, MANSORY relocated their head office from the Bavarian city of Munich to Brand in the Fichtelgebirge Mountains. By taking over the tuning business area of the Swiss company Rinspeed AG, and setting up MANSORY Switzerland AG in November 2008, MANSORY expanded their product portfolio to include a range of accessories for Porsche cars. Refinement of the brands Range-Rover, BMW and Porsche will continue to be marketed under the brand MANSORY Switzerland. The Mannheim company AEV-Automotive GmbH has been part of the group since 2009. The exclusive interior design specialist supplies leading automobile and caravan manufacturers. In 2014, the company MC Motorenentwicklung GmbH was set up to develop and produce improvements in engine performance.

MANSORY now has a team of more than 200 employees and can fulfil nearly every automotive desire of its exclusive clientele. The company does this in Germany and worldwide through its selected distribution partners.