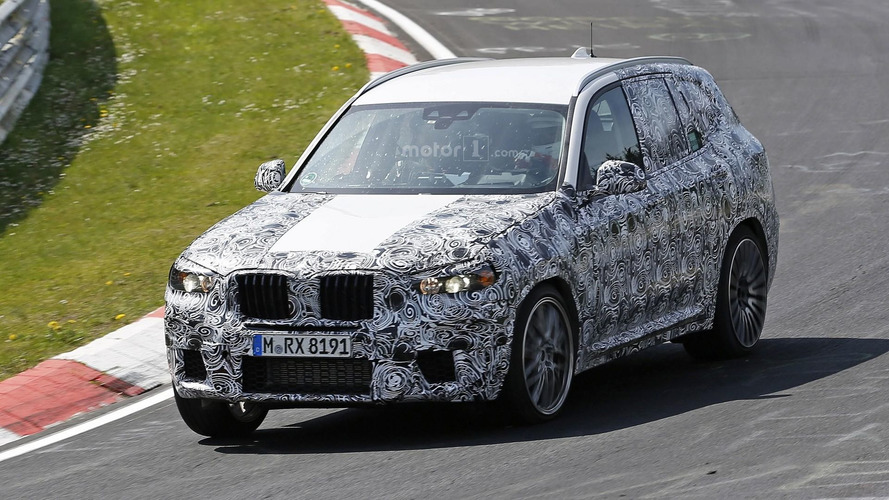 BMW has arrived at the Nurburgring track in Germany with an early prototype of the first-ever X3 M.

It was only a few days ago when a prototype of the next-gen X3 was spotted and now we bring a fresh batch of images with the range-topping M version. The current X3 doesn’t have a full-blown M derivative, but BMW is willing to make up for lost time with the second installment of its compact SAV which will go on sale in non-M guise in 2017. It should be followed a year later by this, the X3 M.

Set to go up against the Mercedes-AMG GLC 63, the X3 M (codenamed F97) already looks more aggressive than the standard X3 (internally known as G01). This is only an early prototype, but it’s easy to see the more aggressive front bumper hosting beefier air intakes. Ignore those ugly headlights and taillights since those are only provisional and won’t make it to the production car. Instead, the high-performance crossover will have the headlights seen on that regular X3 we caught on camera recently.

Let’s talk hardware. The 2017 X3 will literally be an all-new model as it will ride on the CLAR platform that made its debut on the flagship 7 Series in 2015. This means we should expect a substantial weight loss of up to 220 pounds (100 kilograms) on some versions, even though the new X3 will be a tad bigger than today’s model.

As for the X3 M, a report published by Focus.de at the beginning of the year mentioned it will be powered by a turbocharged six-cylinder engine taking advantage of water injection technology as seen in the M4 GTS. The German report mentioned it could have as much as 500 horsepower (368 kilowatts) which in collaboration with the planned diet should make the X3 M a more than decent performer.

With the next X3 getting the M treatment, one can assume the same thing will happen to its “coupe” sibling, the X4.