Pagani Huayra BC dancing on frozen lake is breathtaking 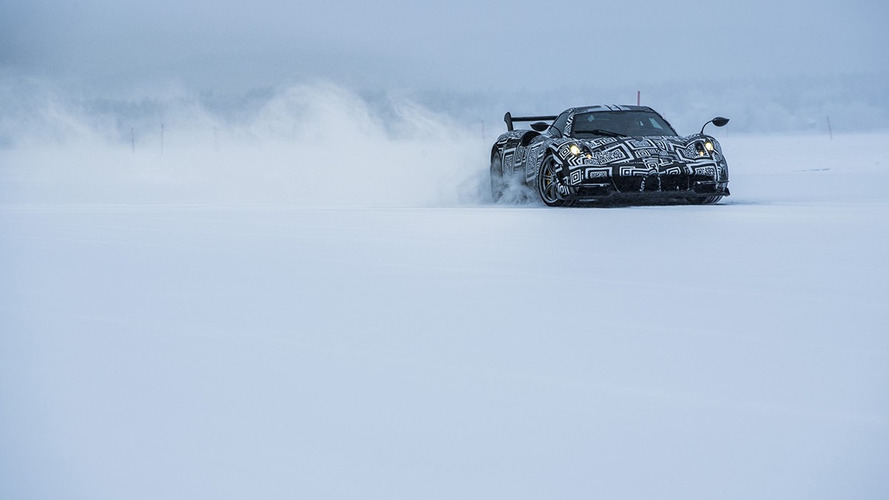 Pagani and Bosch are showing off the Huayra BC’s safety systems that had to undergo comprehensive testing in the extreme conditions of the Arctic Circle.

With more than 750 horsepower (552 kilowatts) coming from a 6.0-liter V12, the Huayra BC needs some serious brakes to match the meaty Mercedes-AMG engine. That’s why Pagani and Bosch tested the ABS antilock braking system of a prototype in northern Sweden for two weeks. The procedures took place at Bosch’s winter test center in Arjeplog where the traction control and electronic stability program were also fine-tuned.

Testing commenced on a roadway surface that was iced over on one side to see how the prototype’s ABS handled the job. After that, the Huayra BC did several laps on a testing course located on the frozen lake to verify the ESP and traction control systems which were also developed by Bosch.

In order to maintain the same driving conditions throughout the entire day, Bosch sprayed the road surfaces with water several times a day. Using special equipment, the ice was smoothened to achieve an optimal amount of friction between the wheels and the surface of the road. That was necessary to allow the engineers accurately analyze the software adjustments gathered on a laptop mounted above the center console.

After each test drive, the stored data was reviewed and changes to the software were made to achieve a perfect “symbiosis of safety and performance,” regardless of the road surface.

That sounds like a lot of work for a car of which only 20 production units will ever be made by Pagani, along with the five existing prototypes. But when you’re playing in the supercar league and you want to remain on top, it takes a lot of preparations to make sure everything is set up accordingly down to the very last detail.

Gallery: Pagani Huayra BC at the Arctic Circle

Driving safety systems are a customized symbiosis of safety and performance

Abstatt/Arjeplog – Jorge Jauregui, a development engineer at Bosch Engineering, opens a garage door at Bosch’s winter test center in Arjeplog, located in the north of Sweden. His warm breath condenses into wisps of fog. The thermometer reads minus 20°C. He has taken out vehicles a countless number of times on the icy and snowy roadways here, analyzing measurement data and optimizing system calibrations. But today is special: the Pagani's latest creation behind the garage door will be driven at the Arctic Circle for the first time. The Pagani Huayra BC boasts 12 cylinders and more than 750 hp. Bosch makes its ABS antilock braking system, the traction control system, and the ESP® electronic stability program. Viewed from the outside, these electronic guardian angels watching over this lightweight wonder are no different than the components found in millions of other vehicles on the road all over the world. But the software in this application was tailored for Pagani’s small production run, using a unique configuration of the software in each of the only 20 vehicles produced + 5 prototypes. The behavior of the systems can be adjusted for one of five stages, ranging from comfort to maximum dynamic handling (Race Mode),

This type of precision engineering work is the task of Jauregui and his colleagues, who will be stationed at the test center in Sweden with a prototype for two weeks. Although they have already subjected a number of vehicles to extreme testing under winter weather conditions as a part of these “winter tests,” this time things are different. As Jauregui says, with a gleam in his eye: “Getting more than 750 hp under control on the snow is a special challenge, even for me. It’s not something I do every day.”

Pagani relies on Bosch for the driving safety and braking control systems used on its Huayra and Huayra BC vehicles. “The philosophy of our vehicles is a combination between Art and Science, Technology and Design, Performanche and  uncompromising safety. Bosch Engineering has been our partner for a number of years now in this endeavor,” says Horacio Pagani, founder of Italian hypercar manufacturer Pagani Automobili. Although the ABS and ESP® hardware come from Bosch’s mass-production automotive portfolio, it is Bosch Engineering GmbH, a subsidiary of the supplier of technology and services, that is responsible for the custom adaptation of the software. Bosch Engineering GmbH employs more than 2,000 engineers whose expertise extends to every aspect of their field – except off-the-shelf solutions. As they have already done with the Huayra and the Zonda, the company is using the Pagani Huayra BC to showcase its ability to tailor and configure both software and electronics to meet vehicle-specific requirements. Because in order to perform ideally in all situations, the ABS and ESP® systems require extremely precise software calibration to accommodate both the performance characteristics of a hypercar as well as the particularities of summer and winter road conditions. “This is the only way in which we can exploit the entire safety potential of the software while creating the dynamic handling particular to this brand. We understand Pagani’s requirements in this regard, and we are developing the software accordingly,” says Bernhard Bihr, president of Bosch Engineering GmbH.

For Jauregui and his colleagues, the days in northern Sweden begin early while it is still dark outside. Although sunrise is still a few hours away, large floodlights already illuminate the various road course modules both over land and over parts of the huge frozen lake. “First we test the ABS on a roadway surface that is iced over on one side. Later on we see how the car handles on a testing course located on the frozen lake,” Jauregui explains. An electronic stability program, for instance, contains over 3,000 parameters in its software that affect the system’s reactions. “The greatest challenge for us is making all of the vehicle’s power and handling controllable and safe, even in critical situations, without losing sight of performance.” Jauregui’s most important ally in this task is Jakob Hellkvist, who is an “icemaker.” Working morning, noon, and night, his job is to prepare the road courses, making sure that the driving surface conditions on land and on the lake are always the same. Several times a day, he sprays the roadways and course modules with water and then smooth them out, after which he will use specialized equipment to give the ice surfaces exactly the right amount of friction. All of this ensures that even the smallest changes in handling behavior can be analyzed following software adjustments, and that these changes are not the result of variations in driving surface conditions. “For us the reproducibility and comparability of measurement data is very important. We want to be able to measure how the handling will change when we adjust one of the parameters. When the road surface is always the same, we can eliminate it as a factor,” Jauregui explains. His laptop is mounted above the center console of the vehicle. After every test drive, he checks the measurement values, stores data, enters new command combinations into the computer, and then starts driving again. He will keep doing so until this symbiosis of safety and performance of Pagani’s Huayra BC is perfect, even on ice and snow.

Bosch conducts winter testing on its state-of-the-art driving dynamics control systems at its test center in Vaitoudden near Arjeplog in northern Sweden. This testing allows engineers to ensure that safety systems such as ABS and ESP® will perform as intended in every situation to provide maximum assistance to the driver. The new, expanded testing grounds were officially opened in December 2003 by King Carl XVI Gustaf of Sweden.