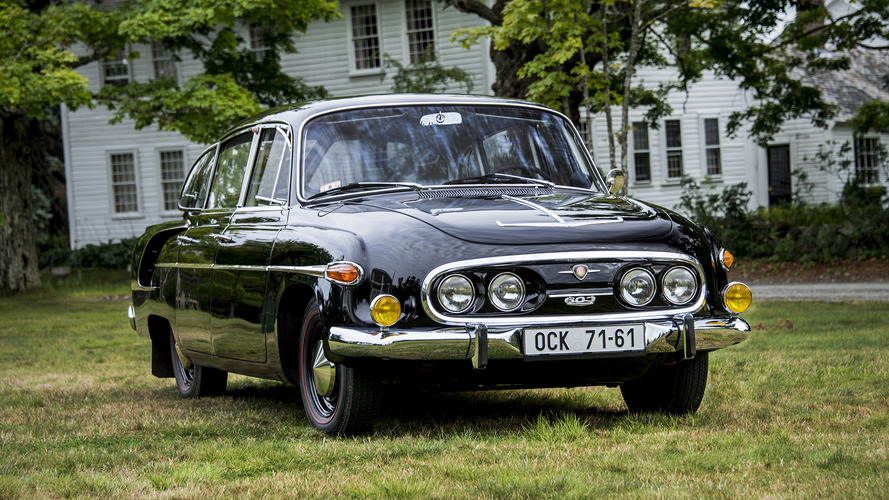 Czechoslovakia, the predecessor of the country known as the Czech Republic nowadays, was famous for producing several very successful Skoda models, but it was actually the Tatra brand that designed the most luxurious vehicles for the country leaders and party officials.

This is the Tatra 603. A full-size luxury car with rear air-cooled 2.5-liter V8 engine and rear-wheel drive, offering room for up to six passengers.

Production started in 1956 in Koprivnice and over the years the company manufactured three different versions of the car, designated T603, T 2-603, and T 3-603. The last example of the model was produced in 1975.

This is the part we love the most about the 603 series. As mentioned above, it’s a car, powered by an air-cooled V8 overhead valve engine that weighed 400 pounds (180 kilograms), allowing the car to have 47/53 front/rear weight distribution between the axles when loaded. The same motor was also used in the T805 military truck.

It was coupled with a four-speed manual gearbox that also available with “mountain” gearing in place of the standard ratios. The transmission made a monoblock with the shaft of the rear axle.

Until 1968, all four wheels had drum brakes that were replaced by disc brakes. Interestingly, the first 603s featured three headlamps and the central one was linked to the steering. A feature already used in the T77a model from 1934.

We could call it the Porsche Panamera of the Soviet Bloc. It had an aerodynamically-tuned body with sleek design and gently sloping roofline, and luxurious interior with plenty of room. Well, the V8 here was air-cooled which makes it even more Porsche than the Porsche itself.

But what’s really special about that car is that it was designed in secret from the government. The country’s economy was subject to some regulations by the Council for Mutual Economic Assistance (COMECON), which decided that Tatra would produce only trucks and luxury cars would be imported from the USSR.

However, Tatra designers started work on a new car under the Valuta project that was officially used for a new three-axle bus. Their moment of glory came in 1953 when the government ordered the development of a new luxury Tatra, thus giving legitimacy to the team’s secret work.

The first drivable 603 was ready in 1955 when a number of body designs were tested in wind-tunnels. Shortly after, it was decided a design by František Kardas tuned by Vladimír Popelář and Josef Chalupa will be produced.

About a third of the 603 production was exported to some central and eastern European countries, as well as to Cuba and China. It is believed even the former Cuban president Fidel Castro had a white T603 with air conditioning.