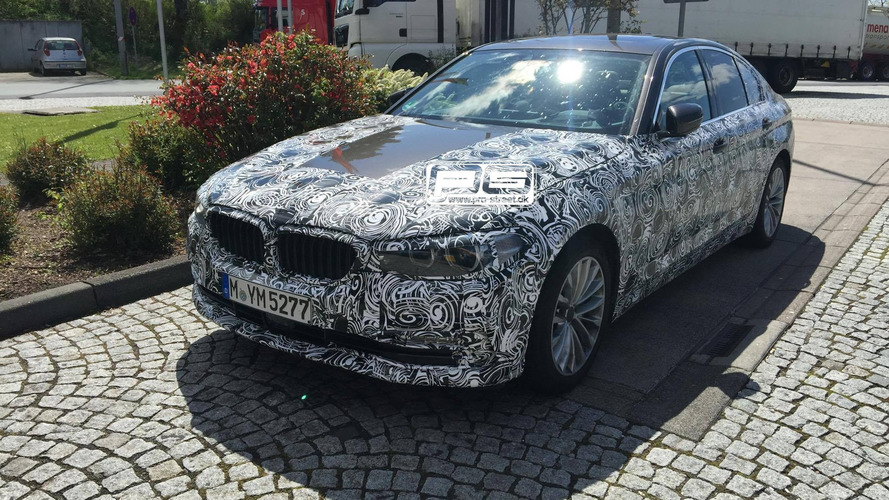 A reader of pro-street.dk grabbed a couple of pics with a camouflaged prototype of the 2017 BMW 5 Series Sedan.

The midsize sedan was spotted at a gas station in Germany carrying the production body which is set to adopt an evolutionary design compared to the outgoing model. Although not evident in the adjacent images, the car could be a tad bigger with a slightly longer wheelbase which would free up more cabin room for the rear passengers.

We also notice the production-ready headlights and taillights which won’t stray away too far from the current appearance. Judging by those dual exhaust tips, this could be a prototype for the 535i, but you can never know for sure with these prototypes.

Although the footprint could increase a little bit, the car will actually be lighter than the current 5 Series. That’s because the G30 generation will make the switch to BMW’s CLAR platform which has already underpinned the company’s crown jewel, the 7 Series. Some versions of the 5 Series are expected to lose up to 220 pounds (100 kilograms) which will improve both performance and efficiency.

Buyers will be given the possibility to select from an extensive array of four-, six-, and eight-cylinder gasoline and diesel engines, all turbocharged. As you’ve come to expect from BMW, a rear-wheel-drive layout will be standard, but customers in need of more traction will be able to pay more for the firm’s proprietary xDrive hardware.

Speaking of xDrive, for the first time ever in the M5’s prolific history, an all-wheel-drive system is going to be offered as optional equipment. The high-performance Bavarian sedan will continue to use the biturbo 4.4-liter V8 engine, but it will likely be upgraded to somewhere in the region of 626 horsepower, if we were to rely on the rumor mill.

If you would rather make fewer visits to the gas station, reports say there are going to be two plug-in hybrid versions: 530e and 540e. Both of them are expected to use hardware adapted from the 330e and will be able to provide an electric range of 22 and 19 miles, respectively.

The first model of the new generation to see the light of day is going to be the regular sedan set to bow in October at the Paris Motor Show. It’s going to be joined by the 5 Series Touring possibly in the first half of 2017 and then by the controversial 5 Series GT that we have already seen testing. As for the M5, it will probably arrive before the end of next year or early 2018.