The new entry-level truck is $4,560 more expensive than the outgoing model.

Update: Initial pricing was incorrectly reported by Chevrolet to Motor1.com. The starting price for the 2023 Chevrolet Colorado is $30,695, which includes the $1,495 destination charge. The previous report listed the destination charge as an extra cost, taking the price to $32,190 which is incorrect. We apologize for the error.

That's an increase of $4,560 compared to the entry-level Colorado for 2022, but in all fairness to Chevrolet, you get more truck for 2023. All Colorados are now crew cabs with a short box at the back, regardless of trim. There's also one engine, a turbocharged 2.7-liter four-cylinder but it's available in three power levels. The base WT starts off with 237 horsepower and 259 pound-feet of torque, turning just the rear wheels. A 2022 model with similar specs would cost just over $30,000, so an apples-to-apples comparison shows a year-over-year increase of around $2,100. 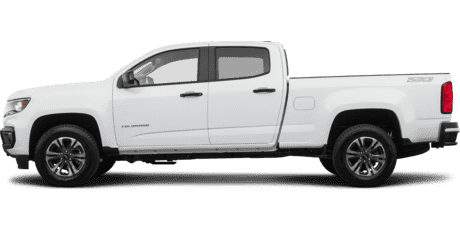 In an email to Motor1.com, a Chevrolet spokesperson stated that 2023 Colorado pricing was released to dealerships and confirmed the Colorado WT's starting price with destination charges. Pricing on other Colorado trims hasn't been officially announced yet. GM Authority cites anonymous sources stating the 2023 Colorado LT starts at $33,095 in 2WD format and $36,395 with 4WD. The Trail Boss starts at $38,495, with the Z71 jumping to $41,395. The Colorado ZR2 is priced from $48,295, with the range-topping ZR2 Desert Boss costing $57,590. These prices are preliminary and do not include destination charges.

Chevrolet shook up its midsize truck in a major way for 2023, dropping different cab and bed configurations in favor of a one-size-fits-all truck. The 3.6-liter V6 and 2.8-liter Duramax turbodiesel were also sliced from Chevy's option book, with Chevrolet Colorado Chief Engineer Nick Katcherian saying they simply weren't needed. The turbocharged 2.7-liter offers a bit more power in base trim than the outgoing 2.5-liter engine. In its highest tune, the same mill is good for 310 hp and 430 pound-feet of torque – outperforming both the V6 and diesel in every manner.

The 2023 Chevrolet Colorado enters production in the first quarter of 2023. We will update the article with official pricing on other trims when it's available.