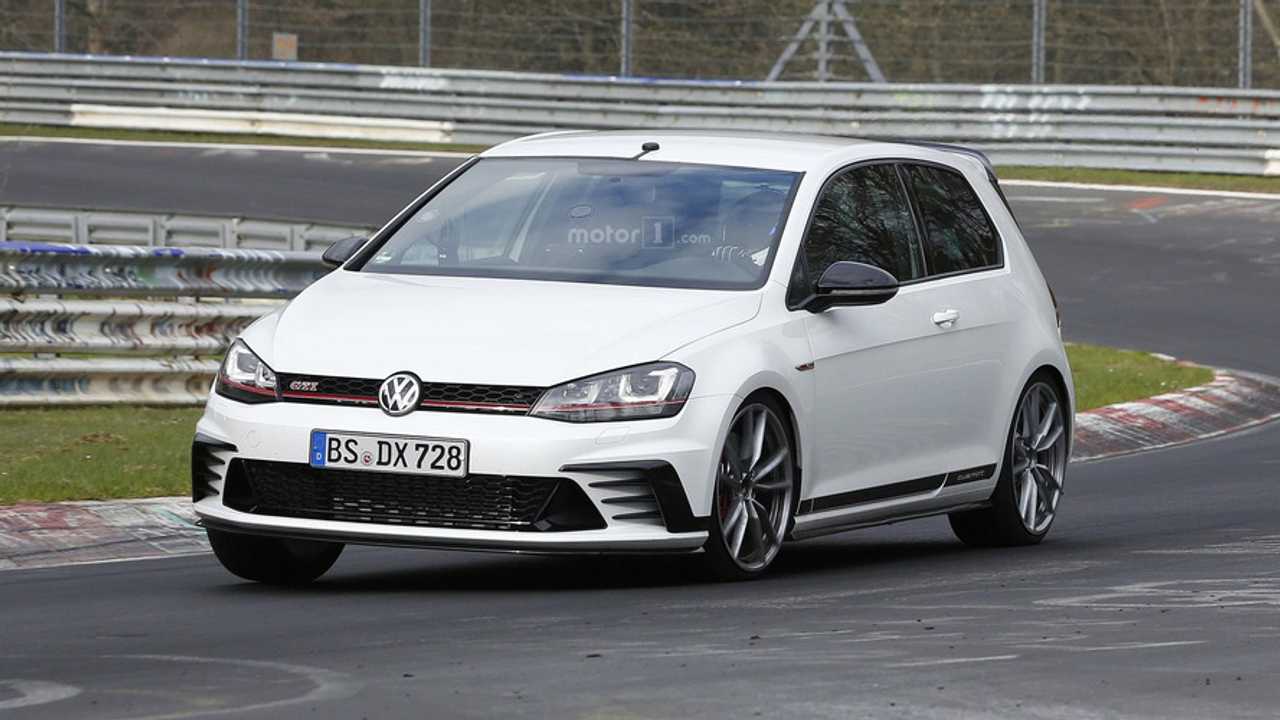 Volkswagen has announced plans to bring a special edition of the Golf GTI Clubsport to next week’s 35th Wörthersee Meet.

Spotted on camera just a few days ago, the hotter Golf GTI Clubsport is being billed by VW as the “most powerful full-production Golf to date.” Still a front-wheel-drive car, the forthcoming special edition will have no less than 310 horsepower (228 kilowatts), making it even stronger than the all-wheel-drive, 300-hp Golf R.

Besides revealing the output, VW is also saying the model’s driving profile is being set up for the Nürburgring with help from racing drivers. Reading between the lines, the guys from Wolfsburg are probably suggesting the hot hatchback will attempt to take down the current record on the ‘Ring for a FWD car.

This record (kind of) belongs to Honda after completing the lap in 7:50.63 with a Civic Type R prototype. If you don’t want to take this performance into account because it wasn’t a production car, the Renault Megane RS 275 Trophy-R is the second best, with a time of 7:54.36. Since the speed limits on the ‘Ring have been abolished, VW could attempt to go below 7:50 with the 310-hp Golf GTI.

Even though VW refers to this new addition as a “full-production” car, it will not be a permanent member in the Golf GTI's lineup as the target is to make only 5,000 units. Regarding its moniker, we now have confirmation from the automaker the car's full name is going to be Golf GTI Clubsport S, as suggested by our spy photographers.

The official reveal is set to take place on May 4 on the shores of Lake Wörthersee and the car will go on sale this fall.

The countdown is running: on 4 May, the 35th Wörthersee Meet begins. Tens of thousands of GTI fans will be there in picturesque Reifnitz on the southern shore of Lake Wörthersee for a gigantic party to celebrate the 40th birthday of the cult hot hatch. Volkswagen is bringing all seven generations of the Golf GTI and the new Golf GTI Clubsport1 along to the festival. That is far from all, however: during the course of this legendary GTI meet, Volkswagen will also be unveiling – as a world premiere – an even hotter variant of the 'Clubsport'. The most powerful full-production Golf to date will launch as a special limited edition this autumn.

'GTI' – for 40 years, this abbreviation has represented the ultimate benchmark for the compact sports car. The Golf GTI. It came onto the market in 1976 and democratised sporty motoring. Equipped with the GTI insignia that made it an unrivalled original: agile engine, direct steering, taut chassis, low weight, evocative design, a gearbox with a golf ball on the end of the gear lever, red stripes on the radiator grille and sports seats with a tartan pattern. Developed as a secret mission. 5,000 cars being the aim. Now the total production run of all Golf GTI models has long since passed the two million mark. GTI. A phenomenon. One of a kind. On the up for 40 years. Reason enough for a Golf GTI unlike any that has ever gone before. The 'Clubsport' special edition. Engineers and racing drivers have created with this GTI one of the fastest front-wheel drive cars of our time. Two facts for now: 228 kW / 310 PS and a driving profile set up for the 'Nürburgring'. Volkswagen will provide all further details about this new Golf GTI on 4 May in Reifnitz.

40 years of the Golf GTI – a quick retrospective

Mk1 Golf GTI / 1976. In 1974, six men forge the secret plan to develop a 'Sports Golf'. They carry the project through to the end. On what day of 1976 the first full-production GTI was built can now no longer be precisely identified. The fact is, however, that with its 110 PS and 182 km/h top speed it stirred up both the world of compact cars and that of luxury sports cars and saloons as well. 1983 sees the debut of the first special edition, the 112-PS 'Pirelli GTI'.

Mk2 Golf GTI / 1984. A strategic stroke of genius follows one year later with the Mk2 Golf GTI. Still with 112 PS, it continues the conceptual course of the first generation. With identical GTI insignia. A newcomer had thus become a classic. An icon. As a result of the introduction of the catalytic converter, the power output briefly goes down to 107 PS in 1984. Two years later, Volkswagen compensates for the reduced power with a new 16V-engine, which delivers 129 PS even with a catalytic converter and matches the agility of the original GTI. In 1990, a 'G-Lader' supercharger in the Golf GTI G60 increases power output to 160 PS.

Mk3 Golf GTI / 1991. In 1991, Volkswagen transfers the GTI insignia to the third generation. This begins with 115 PS. A year later, the power output goes up with a new four-valve engine to 150 PS. In 1996, a turbodiesel version (TDI) delivering 110 PS enriches the GTI concept. Some years later, the petrol and diesel versions ultimately split into GTI and GTD. 1996 also sees the launch of the '20 Years of GTI' anniversary model.

Mk4 Golf GTI / 1998. The fourth GTI generation, introduced in 1998, is very conservative in appearance. Technically, however, the 150-PS Mk4 Golf GTI is a car that keeps the competition at bay with its agility and quality. The four- and (in one case) five-cylinder petrol engines deliver up to 170 PS, while the diesels manage 130 PS. In 2001, the 180-PS special '25 Years of GTI' turbo model heralds a renaissance of the sporty icon.

Mk5 Golf GTI / 2004. With the debut of the fifth generation, the Golf GTI 2004 celebrates a grand comeback. With a much sharper look, a 200-PS turbo engine and superb driving characteristics, it catapults the GTI concept into the future. In 2006, to mark the cult car's 30th birthday, Volkswagen gives its fans the 230-PS '30 Years of GTI' model. Identically powered, the reincarnation of the 'Pirelli GTI' is then launched in 2007.

Mk6 Golf GTI / 2009. With the sixth generation there follows in 2009 a Golf GTI that redefines the subject of traction with an electronic transverse differential lock (XDS). A now 210-PS GTI that is even more fun! A GTI that with a redesigned exhaust system creates a dynamic sound as well. For the first time it is also available as a soft top. This generation's crowning glory comes onto the market in 2011 for the 35th birthday: the 'Golf GTI Edition 35' with 235 PS.

Mk7 Golf GTI / 2012. The seventh generation of the GTI launches in 2012 with two levels of power output: 162 kW / 220 PS2 from the base version and 169 kW / 230 PS3 from the Golf GTI Performance, the latter being equipped with a new front-axle differential lock. Based on this model there then follows in early 2016 the Golf GTI Clubsport, delivering via a boost function up to 213 kW / 290 PS. It blurs the boundaries with motorsport. The special edition of the Golf GTI Clubsport being unveiled in a few days' time on the shores of Lake Wörthersee will now break them down.