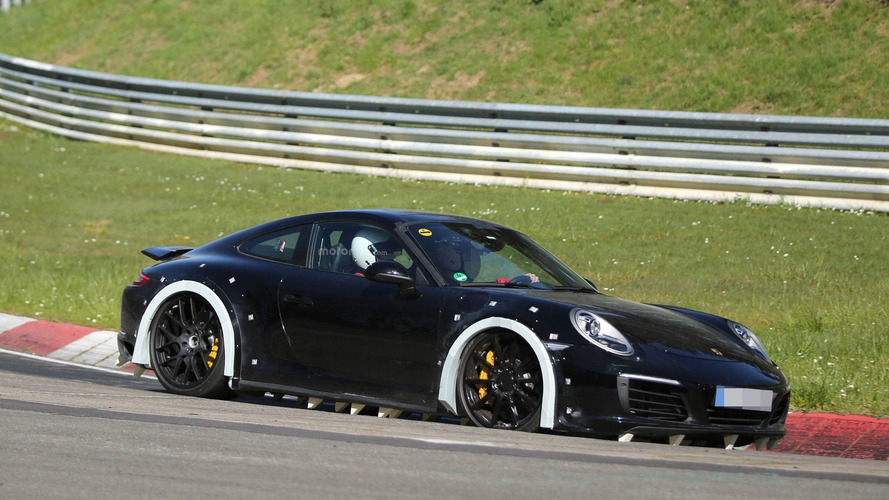 Porsche was seen at the Nürburgring earlier this week with a test mule of the next-generation 911.

Recent spy images have shown Porsche still has a few models in the pipeline for the current 991/991.2 generation, with relevant examples being the forthcoming GT3 RS 4.2 and the GT2. Concomitantly, work is already well underway on the next-generation, the 992. While the odd-looking car spotted by our spy photographers a few days ago at the ‘Ring uses the body of the facelifted 911 Carrera 4, there are some significant changes.

For starters, the wheel arch extensions indicate the next-gen 911 will feature wider front and rear tracks. This could be related to the fact the new model is being engineered to accommodate a hybrid powertrain. It’s unclear at this point whether the 992 generation will ride on an all-new platform or it will sit on an evolution of the current model’s MMB architecture. That being said, sources close to Zuffenhausen are saying new 911 will stick with the existing hardware, but with a longer wheelbase and other upgrades.

Being a test mule, it would be futile to talk about the design. However, we are not expecting any major changes in the styling department because Porsche’s designers will likely play it safe and take the evolutionary path. That’s what they’ve been done ever since the model’s inception, so it is unlikely the 992 will look substantially different than the current car.

As for this particular vehicle, our spies tell us it was packed with testing equipment on the inside where there was also a roll cage. On the outside, aside from the beefier wheel arches, there were also lots of triangular elements underneath the car which were probably there to tweak the ground clearance while the car was stretching on the ‘Ring.