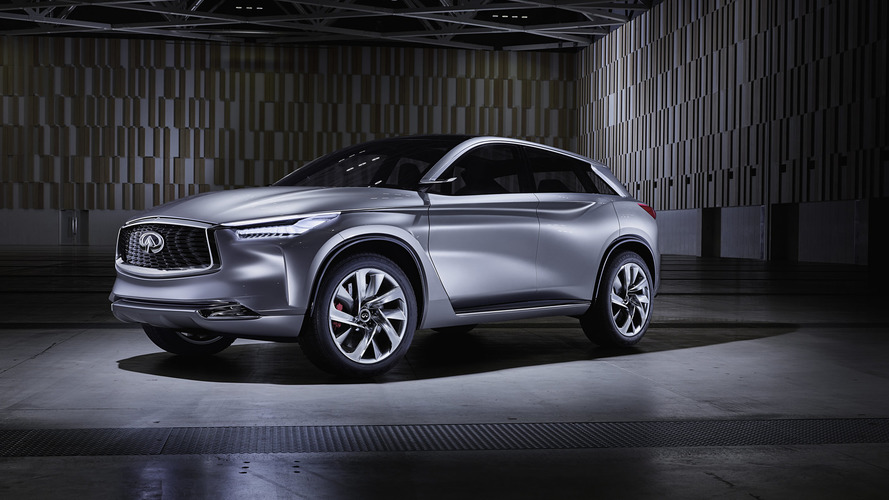 Infiniti is providing a sneak preview of a brand new midsize SUV with the rather bold QX Sport Inspiration concept.

Set to debut on Monday at the Beijing Auto Show, the QX Sport Inspiration is an elegant midsize SUV concept which uses the company’s latest take on the “Powerful Elegance” design philosophy. It combines flowing sculptural lines with muscular wheel arches and sleek headlights which appear to mimic eye lashes. The prominent front grille is home to a large Infiniti logo and has a thick chrome edge which makes it appear quite classy when viewed from the front.

Conventional mirrors have been replaced by cameras to create a cleaner side profile and for the same reason, you will also notice the concept does not have door handles. Beefy alloy wheels featuring a complex rim design make the QX Sport Inspiration stand out, and the sloped roofline creates a sportier silhouette.

The rear end is home to a pair of flat and wide exhaust tips housed within a metallic framing, while the trunk lid hosts high-tech taillights and a neatly integrated spoiler in the center.

Stepping inside, the futuristic cabin has very few conventional controls, since Infiniti decided to integrate the SUV’s functions in the infotainment system which uses a wide screen. Instead of conventional dials, the QX Sport Inspiration has an entirely digital instrument cluster which most likely can be customized by the driver.

A flat-bottomed steering wheel and body-hugging seats contribute to enhance the cabin’s sportiness and there’s an interesting, diamond-like pattern on the door panels and center stack.

Technical specifications are not available at this point, but having exhaust tips at the back it means the QX Sport Inspiration has a combustion engine. In addition, the attached interior pic tells us the concept is fitted with an automatic transmission. Quite possibly, Infiniti has installed a gasoline engine taking into account the digital rev counter goes up to 8,000 rpm.

Check back soon for further details about Infiniti’s latest concept which is set to provide an early look at a future midsize QX-badged SUV.