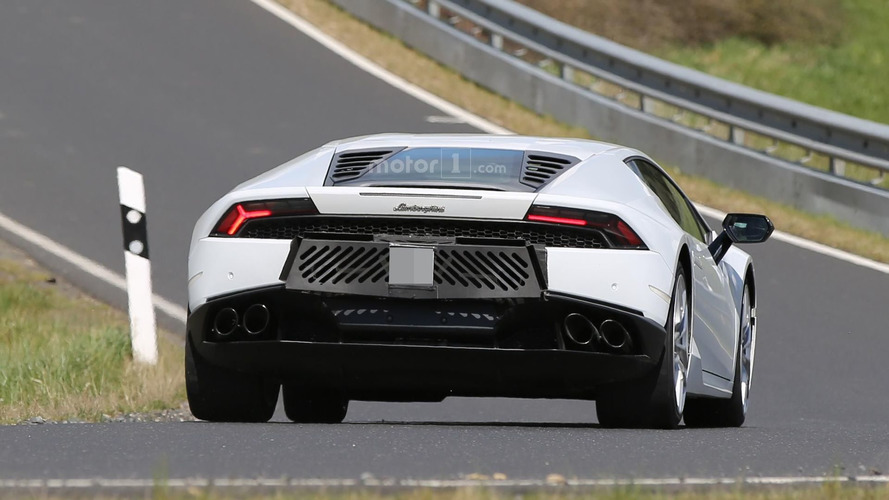 Likely to get the “Superleggera” suffix as its predecessor, the meaner Huracan looks just about the same as the regular model in the attached spy shots, with one exception. The rear end has gone through some changes to facilitate improved engine cooling through a vented metal plate that doesn’t look ready for production. It’s likely only a temporary component especially since this is basically a test mule wearing the body of the regular Huracan.

Interestingly, if you zoom in, you’ll be able to see two exhaust tips behind that plate in the same vein as the Huracan GT3. Now, we are not expecting the guys from Sant’Agata Bolognese to exaggerate and put six exhaust tips on the car. Chances are the four lower tips sourced from the regular Huracan are probably not functional on these two test mules.

A beefier Huracan has already been confirmed by Lamborghini a few months ago and most likely the model has been in development for quite some time. Expect a more aggressive body and a significant weight loss compared to the standard model that tips the scales at 3,135 pounds (1,422 kilograms, dry). This will be possible by making more extensive use of carbon fiber, installing a lighter exhaust system, and possibly lighter wheels along with taking other weight-saving measures.

In addition, the naturally-aspirated 5.2-liter V10 will also be upgraded from the current 610 horsepower (449 kilowatts) and 412 pound-feet (560 newton meters) of torque. The hardware changes could allow the Huracan Superleggera to sprint to 62 mph (100 kph) from a standstill in only three seconds taking into account the standard car needs 3.2 seconds. A minor increase in top speed over the current 202+ mph (325+ kph) is also possible.

It’s not known at this point when the Lamborghini Huracan Superleggera (name not confirmed) will be out, but it could debut as early as October at the Paris Motor Show.