815-hp VW Golf I is the epitome of pocket rocket 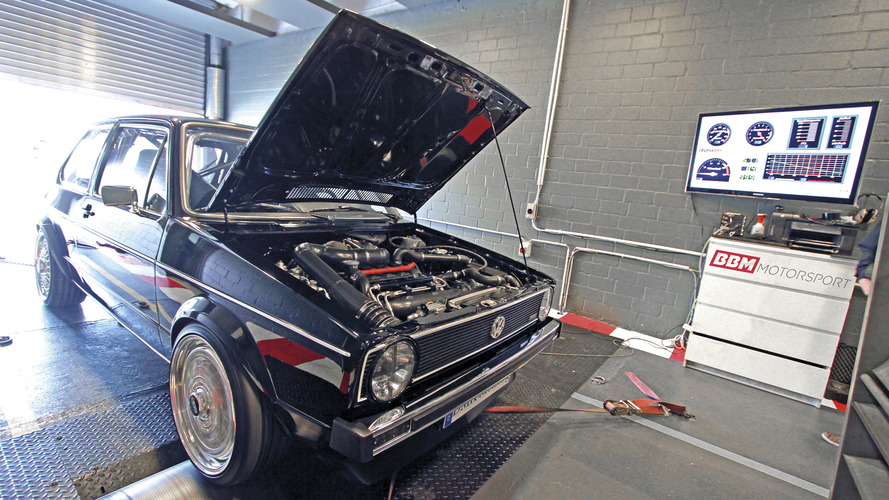 DMK Motoring has squeezed no less than 815 ponies from a first-generation Volkswagen Golf.

Don’t let the “diesel” badge on the front grille and the “GTD” logo at the back trick you into believing this is just an ordinary first-gen Golf because it’s anything but that. BBM Motorsport and DMK Motoring are proud to show off one of the most powerful VW Golfs out there, pushing out a massive 815 horsepower (600 kilowatts) at the dyno.

The heart and soul of this sleeper is a 2.0-liter 16V four-cylinder engine equipped with a Garrett GTX42 turbocharger sending all that power to an all-wheel-drive 4MOTION system (disabled for the dyno run). When viewed from afar, it looks pretty much like a regular Golf I, albeit it does have flared wheel arches, a custom exhaust, and larger wheels. Other than that, this is basically stock on the outside and it certainly doesn't look like a car that has no less than 815 hp underneath the hood.

It’s a different story with the interior cabin which has lost the rear seats and instead gained a roll cage for added strength. To shave off weight, the door panels now have a simplified configuration and we also notice there’s a sportier steering wheel along with a modified dashboard featuring several digital screens.

If you are curious about costs, BBM Motorsport says converting a regular Golf I into this 815-hp little monster would set you back around $68,400 - $91,200 (€60,000 - €80,000). That doesn't sound like a wise move since for $63,500 you could buy a brand new BMW M3 Sedan, for example. That being said, this monstrous Golf is certainly impressive and we are very curious to find out details about its performance.