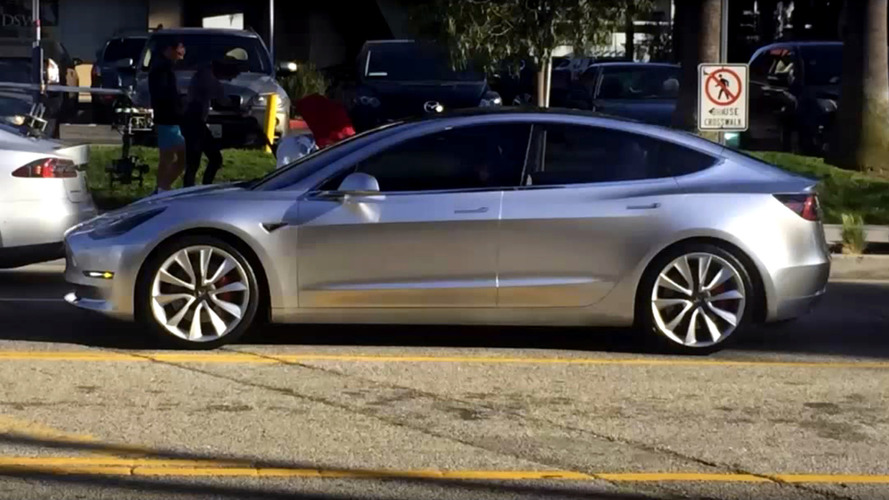 A prototype of the Tesla Model 3 was caught on camera out and about on the streets of California.

Given the Model S camera car in front of it, the Model 3 spotted was probably taking part in a promo shoot on the streets of Marina Del Rey in southern California. Seeing the prototype in broad daylight gives us a better perspective of the Model 3’s proportions and design compared to its bigger brother (which could receive a facelift next week).

With more than 325,000 pre-orders registered in just one week, Tesla Motors will face a difficult task to fulfill all those requests in a timely manner. The number is quite impressive taking into account deliveries won’t start until the end of 2017 and the car seen in the attached footage is not even the production version. Elon Musk said last week the Model 3’s reveal was just part 1 and that part 2 will be “closer to production” and is going to “take things to another level.”

It’s very easy to understand why the Model 3 is already a huge hit. The starting price of $35,000 is certainly a contributing factor and it is worth mentioning the first 200,000 people to get the car will also take advantage of a $7,500 federal tax credit. Rear-wheel-drive is going to be standard, but Tesla Motors will offer the Model 3 with optional dual-motor AWD, thus making the car appealing to a broader audience.

It will be able to comfortably seat up to five people and will have a battery pack with enough juice for at least an EPA-certified 215 miles (346 kilometers). Performance will be more than decent, with Tesla Motors saying the all-electric sedan will run the 0-60 mph (0-96 kph) sprint in less than six seconds. Add into the mix standard Autopilot and a massive 15-inch touchscreen inside the cabin, the Model 3 is shaping up to be the perfect car for a lot of people.

The only major issue will be with the long delivery times, but Elon Musk said a few days ago that Tesla Motors is trying to find ways to boost production. One way to solve the problem would be to establish a factory in France which could cater to the European market. French Energy Minister Segolene Royal has expressed her support for a Tesla Motors factory at the Fessenheim nuclear power plant. With France being the biggest market for electric vehicles in Europe, it would make sense for Tesla Motors to set up shop over there.