Performance has changed a lot in 20 years.

It’s quite clear that performance vehicles have greatly improved since the turn of the millennium. Cars with over 1,000 horsepower are more common than ever, and EVs further cheapen raw oomph. But a new video from TFLclassics reveals how much performance has changed for more mainstream models by pitting a new base Volkswagen Jetta against a 2003 VW Passat W8 in a drag race.

The Jetta is down on power with a much smaller engine by comparison. A turbocharged 1.5-liter four-cylinder makes 158 hp (116 kW) and 184 lb-ft (249 Nm) of torque, with power routing to the front wheels through a six-speed manual. While the Jetta is down on power, it’s about 1,000 pounds (453 kilograms) lighter than the Passat, even though the new Jetta is longer and wider.

The Passat gets the better start off the line in the quarter-mile race. Its all-wheel drive and extra power allow it to gain an early lead, one that the Jetta is incapable of closing. The Passat needed 16.82 seconds to complete the quarter mile, while it took the Jetta 17.23 seconds. However, the Jetta finished the race with a higher trap speed.

The rolling race is much close, neutering the W8’s all-wheel-drive advantage. However, the Jetta still struggled to beat the Passat, finishing closer to the old sedan but still solidly in second place. The only competition the Jetta won was the final brake test. The newer braking system and lighter curb weight allowed the new Volkswagen to stop at a shorter distance than the Passat.

The new, updated Jetta might not match the old Passat W8’s performance capabilities, but it’s close. The video demonstrates how far power and performance have come since the turn of the century. The Passat W8 was an expensive car for its time, but 20 years later, the base Jetta is now nipping at its rear bumper, and it’s far more affordable, too. 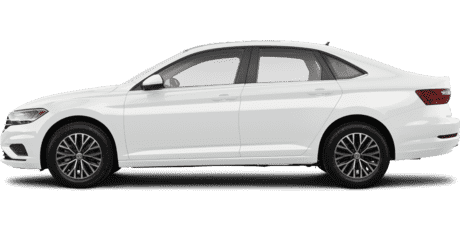