Inexperienced Mustang driver tries to show off, rear-ends another car 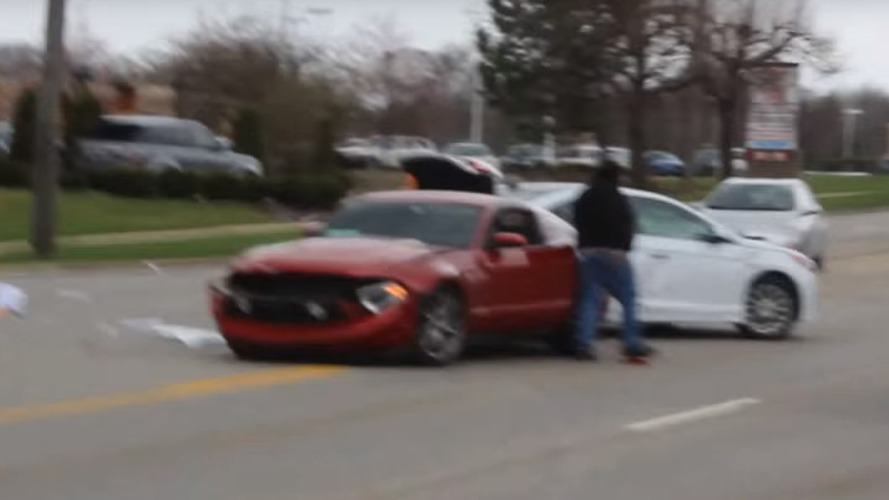 The driver of a fifth-gen Mustang lost control of the pony car and ultimately hit a white vehicle which we believe was a Hyundai Sonata.

They don’t call it the Windy City for nothing. During a Cars & Coffee Chicago meet last weekend, the driver of a fifth-gen Ford Mustang decided to show off his skills by hitting the gas pedal hard while he was leaving the event. However, that didn’t go as planned, as he lost control of his beloved pony car and rear-ended a white car that was patiently waiting for the road up ahead to clear in order to make a left turn.

Overconfident in his abilities behind the wheel of the tail-happy Mustang, the driver learned a valuable lesson about rear-wheel-drive cars that come with powerful engines. According to the person who uploaded one of the videos on YouTube, there was another guy with a Pontiac GTO that made the exact same mistake before the Mustang driver, but thankfully he didn’t hit anything.

The only thing that really matters is there weren’t any injuries reported after the incident. As for the Mustang and the Sonata, both cars are now in need of some serious TLC before heading back to the road. Let’s just hope the Mustang driver won’t make the same mistake again and from now on will drive off from these meetings like a civilized person.