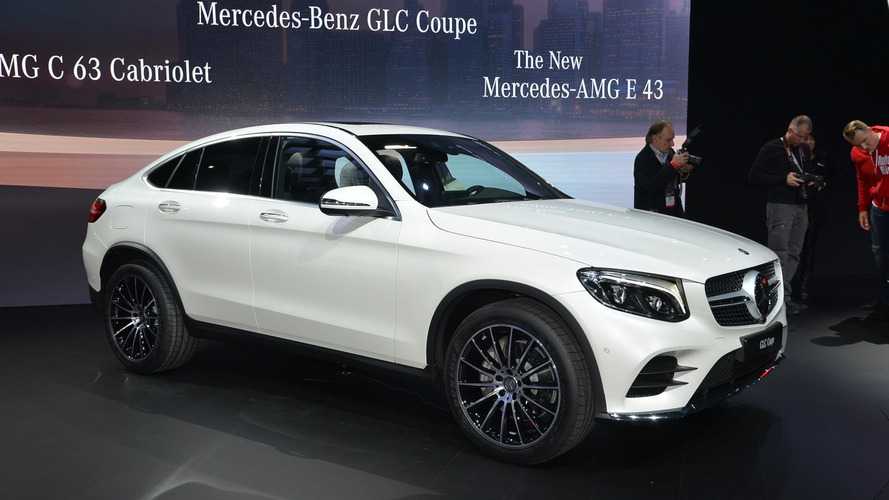 The crossover coupe trend shows no sign of slowing down as Mercedes has unveiled the new GLC Coupe.

Set to debut at the New York Auto Show tomorrow, the GLC Coupe follows in the footsteps of the GLE Coupe and adopts a sporty front fascia with a single bar grille and large air intakes.  Bigger changes occur aft of the A-pillar as the crossover has a sporty roofline that is approximately 1.6-inches longer than that of the standard GLC.  A closer inspection reveals slender LED taillights, a dual exhaust system, and a power liftgate with an integrated spoiler.  Other highlights include a sporty rear diffuser and standard 19-inch alloy wheels.

The interior largely carries over but it comes nicely equipped with MB-Tex upholstery, a power driver's seat, and an infotainment system with a seven-inch display.  Drivers will also find a glass sunroof and a standard rearview camera which should help to minimize blind spots when backing up.

A variety of options will be available including heated / ventilated front seats, an ambient interior lighting system, and an infotainment system with a larger 8.4-inch display.  Customers can also order a Head-up display, an Air balance package, and an Interior Sport Package that adds a flat-bottom steering wheel, rubber studded pedals, and AMG-branded floor mats.

The entry-level GLC300 4Matic Coupe is powered by a turbocharged 2.0-liter four-cylinder engine that produces 241 horsepower and 273 pound-feet of torque.  The engine is connected to a nine-speed automatic transmission and a standard all-wheel-drive system.

Moving up to the GLC43 Coupe rewards buyers with a biturbo 3.0-liter V6 engine that develops 362 hp and 384 lb-ft of torque.  It is paired to a nine-speed automatic transmission and a rear-based AMG Performance 4Matic all-wheel-drive system which enables the crossover to run from 0-60 mph in less than five seconds.

The GLC300 4MATIC Coupe and GLC43 Coupe will go on sale in the United States early next year.