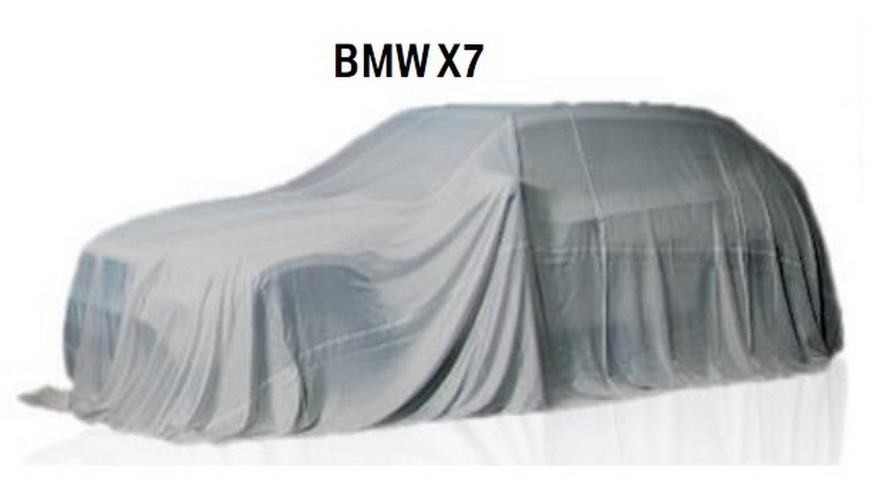 The 2019 BMW X7 is hiding under a cover in an image sourced from a document related the company’s annual press conference.

The 2019 BMW X7 is hiding under a cover in an image sourced from a document related to the company’s annual press conference.

Because of the semi-transparent cover, it’s a bit tricky to point out at this moment any specific details that would make the X7 stand out from the X range in terms of design. We do know it will be substantially larger than the X5 and as a result will offer more room inside the cabin for those sitting on the rearmost seats.

Codenamed “F17”, the three-row SUV will sit on top of the X lineup and will ride on the same CLAR platform that has underpinned the latest 7 Series. It will likely inherit the engines from BMW’s flagship sedan, all the way up to the V12 which will make its debut on an X model. As a side note, the 2000 X5 Le Mans did indeed sport a 700-hp V12 engine, but that was only a one-off.

As far as the interior is concerned, it’s expected to be even more luxurious than what the latest 7 Series has. Moreover, the X7 will reportedly gain an ultra-luxurious variant later during the model’s life cycle that will lose the third row of seats. It will be turned into a four-seater with plenty of room for the rear passengers sitting on individual seats featuring ventilation, heating, and massaging functions. There’s also going to be a rear-seat entertainment system and a full-length center console to further differentiate it from the seven-seat X7.

BMW’s cream of the crop SAV will be assembled in South Carolina, United States at the Spartanburg factory. It won’t come out in the foreseeable future, since BMW North America CEO Ludwig Willisch said it’s not due before 2019. That being said, we could see some sort of a preview concept in 2017 or 2018 to ease the waiting process.

Reports are indicating the Bavarians want to sell around 45,000 units every year and the cheapest version will begin at €130,000, probably in Germany. If that turns out to be true, the X7 will be way more expensive than a base 7 Series which in its domestic market kicks off at €82,600.