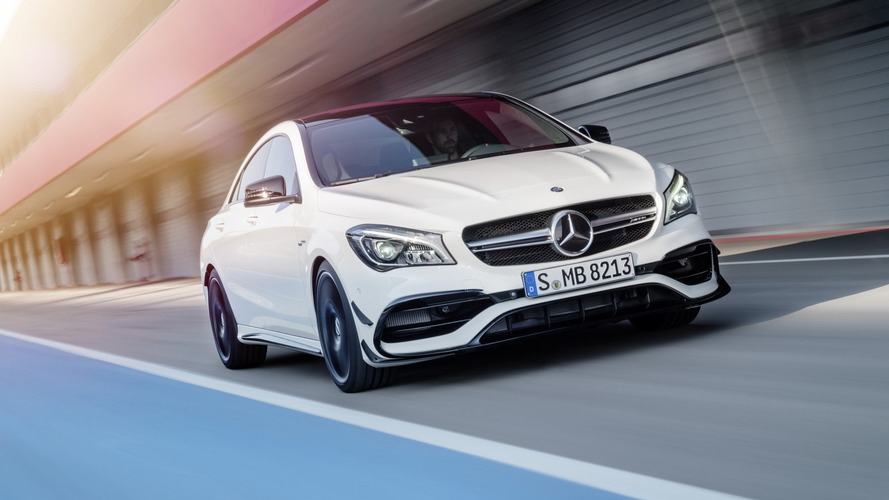 Mercedes has unveiled the facelifted CLA and CLA Shooting Brake.

Looking instantly recognizable, the models feature new bumpers, a revised diamond grille, and restyled 18-inch alloy wheels.  The cars have also been equipped with flush-mounted tailpipes and a revised color palette that now includes Cavansite Blue Metallic (Lunar Blue in the United States).  Last but not least, there are several new options including LED High Performance headlights that have a color temperature which is closer to daylight than traditional xenon headlights.

The interior receives a minor refreshing as designers added updated upholstery and a slimmer infotainment system with an 8-inch display.  Drivers will also discover additional chrome trim, a revised instrument cluster, and new trim options such as matte black ash wood and aluminum with a honeycomb grain.

American consumers will only have two engine options.  The entry-level CLA 250 has a 2.0-liter four-cylinder engine that develops 208 hp and 258 pound-feet of torque, while the Mercedes-AMG CLA 45 boasts an upgraded 2.0-liter four-cylinder with 375 hp and 350 lb-ft of torque.  This enables the latter model to accelerate from 0-60 miles per hour in 4.1 seconds before hitting a limited top speed of 155 mph.

The Mercedes CLA will be unveiled the New York Auto Show later this month, while the CLA Shooting Brake will debut at the Laureus World Sports Awards in Berlin this April.  The models will begin arriving at German dealerships in July, while a US launch is planned for the third quarter of 2016.