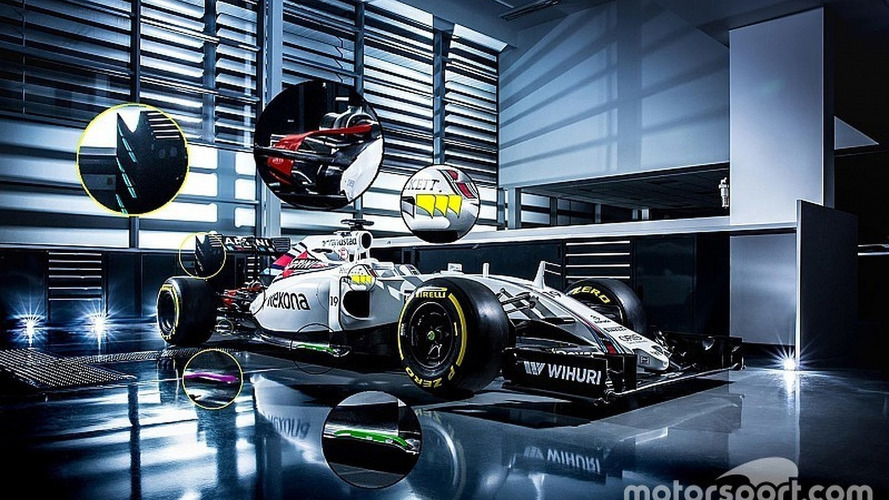 Williams unveiled its 2016 Formula 1 car via social channels on Friday and, although the FW38 looks very similar to its predecessor, there are some marked changes that set it apart, as Matt Somerfield explains. The front The nose, an area of intense development for the teams, seems unchanged in this launch version of the car.

Williams unveiled its 2016 Formula 1 car via social channels on Friday and, although the FW38 looks very similar to its predecessor, there are some marked changes that set it apart, as Matt Somerfield explains.

The nose, an area of intense development for the teams, seems unchanged in this launch version of the car.

Whether Williams has plans to change this during testing remains unknown but, with that area of the car vital to the performance it is certainly something that will not escape the designers' attention.

The team has, however, revised the front suspension geometry, which is likely the result of investigations done by its wet weather working group, set-up last season to combat inefficiencies with its set-up.

On the floor's leading edge, the team has followed many of the other teams' lead, adopting a detached floor scroll (highlighted in green), which will increase overall efficiency in this area.

This is key, when considering the airflow that must make its way around the sidepods' frontal undercut, especially as the wake dispatched by the front wheel will interfere with it.

A revised sidepod inlet suggests the team is making architectural changes to the coolers that lie inside, whether that is to cater to new demands from the Mercedes PU106C power unit or for improvements made to alter the cars thermal operating window in general.

Aside from the inlet geometry change, the shape of the sidepod surfaces have also changed, with revisions made to the leading edge control devices.

Having used a singular vortex generator atop the sidepods' leading edge for most of the 2015 season, the team has increased this to three (highlighted in yellow), as it tried out in the final few races of last season.

These extra find will allow the team to run a more aggressive slope angle without fear of flow separation.

The bulge where the sidepod meets with the engine cover has also ballooned and is indicative of a change in packaging internally.

Whether this is a common denominator between the Mercedes-powered teams remains to be seen but it is more likely down to the positioning of the ERS/engine oil coolers, especially as Williams has retained the short engine cover/cooling outlet synonymous with its recent cars.

At the rear of the sidepods, the team has elected to use a hooped winglet (highlighted in red), similar to the layout used by Mercedes during 2015.

Not only will this shape and isolate the airflow moving around the coke bottle region, but the upper surface is cambered in such a way that it will act like a winglet, helping to connect the diffuser, exhaust and rear wing flow structures.

Revisions have also been made to the floor around the rear tyre as the team tries to minimise the effects of tyre squirt, with the team creating an upward floor flick (highlighted in purple).

Ordinarily as the tyre rotates and deforms, under load, it will squirt airflow laterally into the diffuser's path, robbing the diffuser of downforce and consistency.

Shaping the airflow that surrounds the tyre can therefore inhibit the effects of tyre squirt and improve the operating window of the diffuser, which is what this flick is aiming to do.

The rear wing endplates have been treated to some revised strikes too. Having previously employed solid full length strikes, these have been replaced by serrated ones (highlighted in light blue).

We have seen these run by teams including McLaren and Lotus in the past and, whilst the change may seem negligible, their effect should be enhanced depending on the yaw angle.

The images released by Williams also bring credence to the teaser already presented by Mercedes in which a twin wastegate configuration was presented.

For 2016 all teams must run at least one separate wastegate exhaust - with a maximum of two wastegate outlets permitted - to improve the sound of the power units, with their exit into the normal exhaust having previously attenuated the sound emitted.

It is hoped that this change will be enough to appease those that derided the sound change that came about when Formula 1 moved to the hybrid power units in 2014.

The FW36 was the least draggy of the 2014 field, often putting the Williams drivers in with a chance against the Mercedes drivers. But having changed tact a little for 2015, the FW37 lost that edge.

Whilst the FW38 is not specifically designed to be as quick as the FW36 in a straight line, the changes implemented should bring a marked improvement in overall laptime.