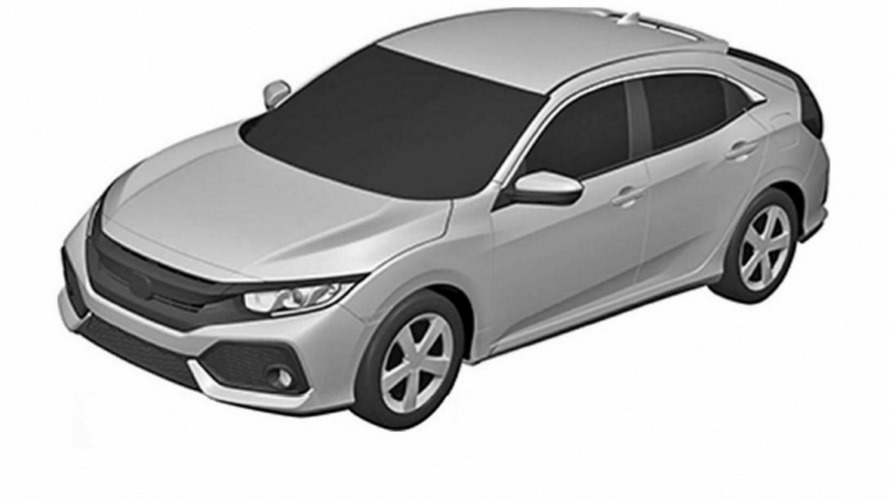 We have stumbled upon a batch of patent images which could show the 2017 Honda Civic hatchback in production guise.

We have stumbled upon a batch of patent images which could show the 2017 Honda Civic hatchback in production guise.

Honda unveiled earlier this month in Geneva the Civic Hatchback Prototype which serves as a preview for next year’s production model and now these patent images show a less exciting version of the prototype. It could very well be the production car as it comes with regular wheels and a slightly less aggressive body lacking the front and rear spoiler lips. In addition, the side skirts don’t stand out as they do on the prototype and at the back the dual exhaust tips are missing while a rear windshield wiper has been added.

Even if this is not the production version, the only change we could see on the 2017 Civic Hatchback compared to these patent images would be the meshes in the bumpers. On the attached images these are quite large and seem to mirror those on the prototype, so the production car could come with smaller meshes. Other than that, the vehicle looks ready to hit Honda’s assembly line at the Swindon factory in the United Kingdom.

Compared to the outgoing Civic five-door hatchback, the prototype showed by Honda in Geneva was 130 mm longer, 30 mm wider, and it was sitting 20 mm lower. We already know the production model will be offered with a newly developed 1.0-liter three-cylinder engine which will be joined by the 1.5-liter available in the Civic Sedan and Coupe launched recently in the United States. A more popular choice among European buyers will likely be the familiar 1.6-liter i-DTEC turbodiesel. Depending on selection, these engines will work with either a six-speed manual gearbox or an optional CVT.

Taking into account the 2017 Honda Civic in European specification is set to go on sale early next year, we will likely see it in the metal this October at the Paris Motor Show.